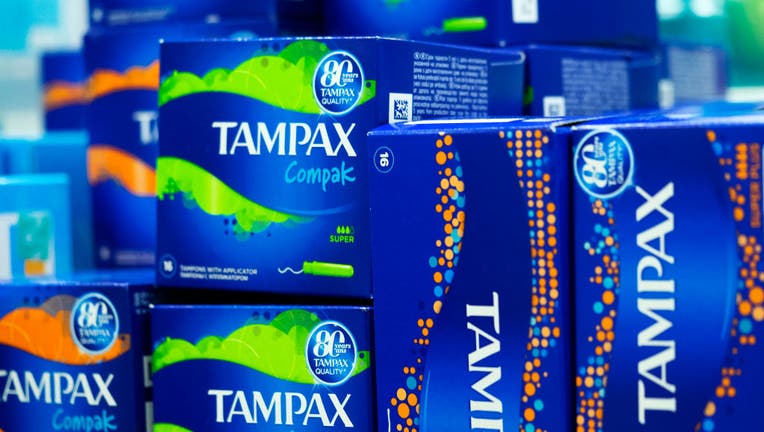 Tampax Pads seen in store.Tampax is a brand of tampon currently owned by Procter &amp; Gamble and sold in over 100 countries. (Photo by Igor Golovniov/SOPA Images/LightRocket via Getty Images)

SOUTHFIELD, Mich. (FOX 2) - Michigan Governor Gretchen Whitmer has signed a bill that will remove the state's ‘tampon tax’ after the bill was passed by both the House and Senate in Lansing earlier this year.

Whitmer signed the first bill which is part of a bipartisan package to repeal the tax on essential menstrual products - including tampons - which have been sold with a 6% sales tax as they were deemed "luxury items".

The Democratic governor initially proposed lifting the tax in her 2022 budget proposal with a provision that the revenue lost would not be pulled from the School Aid Fund. The House Fiscal Agency estimates that Michigan would lose out on $7 million in tax revenue each year, but maintains that funding will not be taken from schools.

"After years of trying to repeal this tax, I am proud that we are bringing people together to put Michiganders first and drive down costs on these essential products," Whitmer said. "Everyone should be able to take care of their most basic healthcare needs without an unnecessary added financial burden. Tomorrow, I will sign the second bill in the package to repeal this tax and cut costs for families as we usher in a new era of prosperity for Michigan."

Harbor Springs Republican Rep. John Damoose, who voted in October to approve the measure, said he was struck by a conversation with a friend in which the tampon tax was identified as a "liberal" issue. He testified that there should be no reason that "just because the other side wants something, the other should say no."

"These ideas seem to fit within Republican ideals as much as they do within Democratic ideals," Damoose said. "I came to the conclusion that if there are things we can do together, we should do them together."

Whitmer will sign the second bill in the package tomorrow. Once in effect, it is projected that the repeal of the tampon tax could save families up to $4,800 over the course of a lifetime.