The battle between Republicans and Democrats over how to run elections is heating up again as Gov. Gretchen Whitmer has vetoed legislation that had bi-partisan support in the House and Senate. Some want to know why did she do it, and what happens next.

FOX 2 - The battle between Republicans and Democrats over how to run elections is heating up again as Gov. Gretchen Whitmer has vetoed legislation that had bipartisan support in the House and Senate.  Some want to know why did she do it, and what happens next.

One of the measures Whitmer vetoed at an NAACP dinner last night would have prevented voting machines from being hooked up to the Internet on election day.  The governor argues that's unnecessary since its not being done now and she added the bill would have perpetuated the "big lie" that President Joe Biden stole the election from Donald Trump.

Another veto that has some scratching their heads is the governor's veto that would have created polling places at senior centers around the state. She said the bill would actually make it more difficult for seniors to vote.

The Senate GOP leader Mike Shirkey denounced the governor for playing politics with these bills.

Another group funded by Betsey DeVos claimed the vetoes were a "chilling attack on election integrity."

Donald Trump supporters have been successful in passing 28 bills in 17 states to revamp - or protect - the election process (depending on who you ask).

Former state GOP Chair Saul Anuzis says secretaries of state and judges in some of these states overstepped their election authority and the Republican legislature are trying to reign them in.

"And that's why you see states like Wisconsin, Pennsaylvian, and Michigan passing laws dealing with the rules and regulations as to have elections should be administered," he said.

The governor has said she is ready to veto more of the GOP election bills because she argues it's all about Republican efforts to suppress the vote. 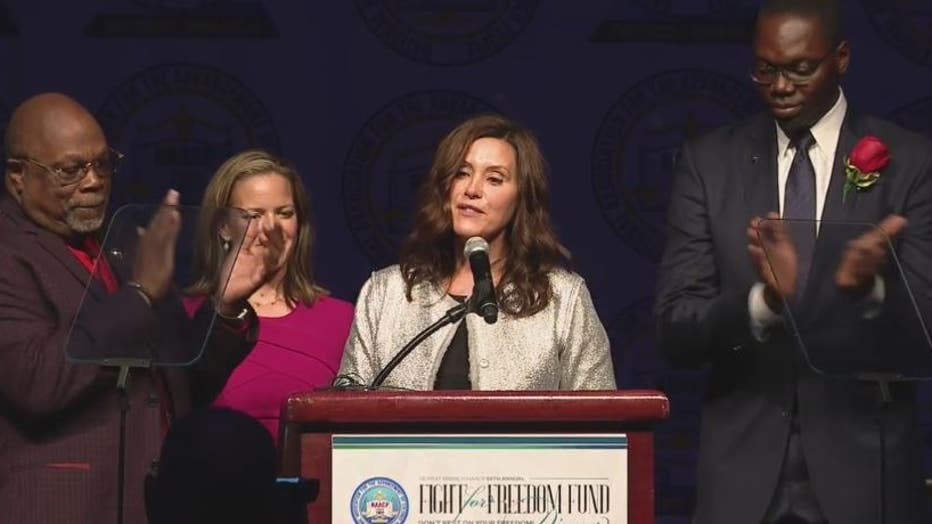 "Voter suppression is not okay," she said. "Eliminating people's access to the ballot is anti-Democratic and it is really unfortunate that the Michigan legislature has decided to go this route like many other states in our nation."

But at the urging of state GOP Chair Ron Weiser, the party has launched a statewide petition drive to implement all the bills the governor will veto and if the voters approve it next November if it gets to the ballot.

The governor can't veto that, but the Democrats will wage a huge ballot to block it from ever getting to the voters.