WARREN, Mich. (FOX 2) - On Tuesday Warren police arrested an Amazon delivery driver - and witnesses say it was for parking the wrong way on the street.

Police say the incident is being reviewed, but  Mayor Jim Fouts took to Facebook calling for one of his own officers to be fired and subject to a criminal investigation after an altercation with an Amazon driver.

He quickly removed the post after talking with Police Commissioner Bill Dwyer. All the police commissioner would tell FOX 2 is that the matter is under investigation.

Police are not talking Tuesday night, but neighbors who witnessed the incident, are. A publicly shared Facebook Live video starts with the Amazon delivery man on the ground detained by police.

“I delivered to her," he says to police.

“I can attest to it, he put the box in my hand," said witness Diana Gouim.

It happened at 2 p.m. Tuesday on Engleman in Warren when the package was delivered.

“And he was so polite to my neighbor, he offered to put it on the chair for her because it was heavy," said neighbor Geri Cheatham.

But seconds later, a Warren officer was at the scene.

“From when my sister walked in the house and then walked back out, the cop had him on the ground and cuffed and was calling for back-up," said witness Jim Michaels.

The video shows police back up certainly did arrive quickly.

“It was ridiculous for one little kid that was the size of me," Cheatham said.

The aftermath was captured on cell phones.

"Because he parked backwards," a witness says on video

“We, several of the neighbors, spoke with the officer saying the kid hasn't done anything and the cop was like well, 'He was parked the wrong way,'” Michaels said. 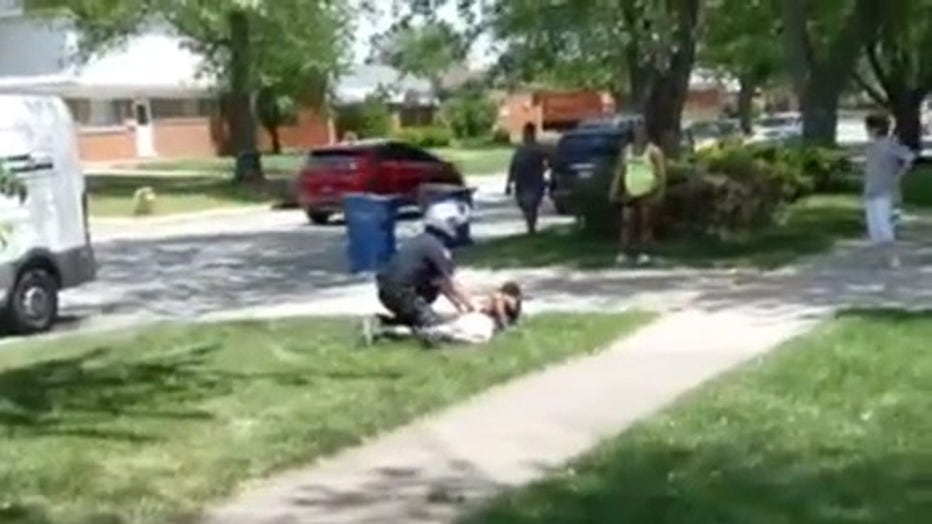 Police Commissioner Bill Dwyer said during a Wednesday press conference that he was recommending felony charges of resisting arrest, failure to obey a lawful command, and failure to provide a driver's license.

We are told Amazon was notified and another employee took the truck from the scene. A statement from the company reads:

“We see what others see in this video, and it’s unacceptable. We expect a swift investigation and full accountability for those involved. Amazon will deploy all necessary resources to investigate the matter with our Delivery Service Provider, as well as to represent and support the driver," said Deborah Bass, an Amazon spokesperson.

Mayor Fouts created a new post on Facebook, saying, "I received several phone calls regarding this incident requiring me to make a statement that any type of aggressive behavior is not tolerated. I was upset that one individual could possibly besmirch the fine reputation of Warren police officers."