DETROIT (FOX 2) - It's not the kind of Christmas surprise a Detroit woman was hoping for after she woke up to a ceiling falling on top of her as she slept.

"I woke up Christmas morning to ceiling fell from here and hit here and fell on me," said Zoe Morrisette.

A woman is looking for help as she deals with terrible conditions in her apartment on Detroit's east side.

Morrisette says she's fed up with the bad conditions in her apartment on Detroit's east side, from the leaking radiators to the rodents. Everybody has roaches, she says.

She says there's no such thing as home sweet home at 11705 Elmdale. In addition to the chunks of plaster falling from her bedroom ceiling, Morrissette says a hole in the bathroom ceiling has been there since April. Every time the tenant upstairs takes a shower or bath, it leaks.

And when she calls the landlord:

"They come out and they write stuff down and maybe take a picture or they don't come at all," she said.

FOX 2 called the landlord for comment -- no answer. The building at the corner of Elmdale and Gunston has several units. Morrissette says she's not the only one to complain about the conditions here.

"There are not many blocks in this city where the neighbors won't say there's a rental property on my block where they just don't care," Mayor Mike Duggan previously said. 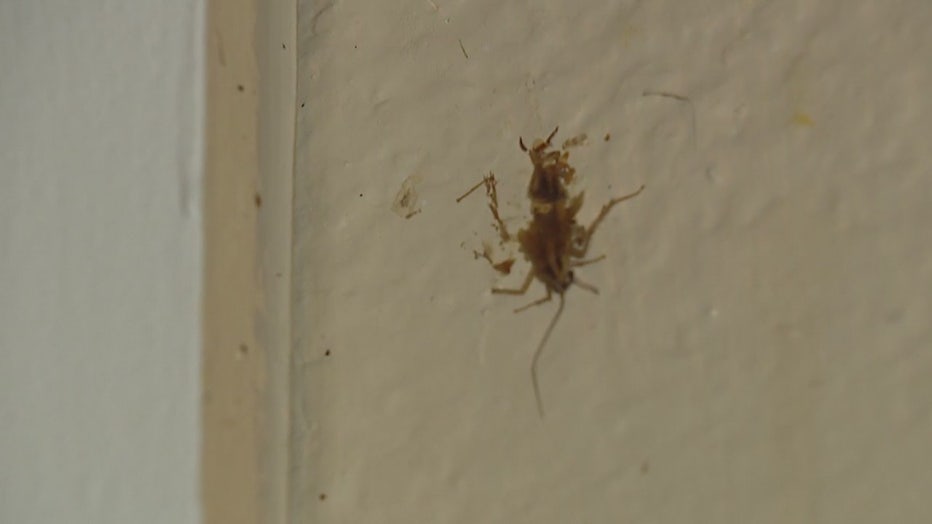 A woman woke Christmas morning to ceiling falling down on top of her as she slept.

Back in 2018, the city of Detroit launched a crackdown on landlords whose properties are not up to code. Morissette says the hammer needs to fall on her landlord.

In a statement, BSEED said:

"BSEED inspectors were last at this location in May and wrote $600 in tickets.  An inspector will be back on site tomorrow to assess the situation likely will issue more than $1,000 in additional tickets for lack of compliance in the following areas: peeling paint, defective plaster, defective guardrails, no lead clearance and no certificate of compliance.

We also will reach out to the landlord to see if they can provide another unit for this tenant.

Next week we will be sitting down with the law department law to discuss the possibility of a nuisance abatement lawsuit against the landlord to bring this property into compliance so this tenant and others no longer have to live in these unacceptable conditions."