FLINT, Mich. (FOX 2) - A woman was shot and killed by a police officer Saturday afternoon during a Juneteenth parade in Flint after police said she pulled up and started shooting a police officer.

Michigan State Police are investigating the tragic shooting and said the car pulled up to a Flint Police Officer working the Juneteenth parade route north of downtown Flint.

It was around 2 p.m. when the 19-year-old Flint woman pulled up in her car and start firing at the officer. The officer fired back and hit the woman. She was taken to a Flint hospital where she was later pronounced dead.

On Monday, Michigan State Police identified her as 19-year-old Brianna Sykes, from Flint.

An anonymous witness told ABC12 in Flint that he saw what happened and watched the officer break down after the shooting.

A Flint Police Officer who was working traffic control for the Juneteenth parade Saturday shot and killed a woman who pulled up and started shooting at him.

"I saw an officer maybe ten feet to the left of me in front of a car with his gun out. I didn’t see if anybody shot out of the car but I did see the officer shoot into the car and I could tell that he, from his look, like he mortally wounded somebody. He instantly fell to the ground crying because I felt like he didn’t want to do whatever he had to do," ABC12 reported.

Video obtained by FOX 2 shows a silver car next to an officer, who has his gun out and pointed at the car. There is no audio but the officer can be seen talking and giving orders to the driver while keeping his weapon aimed at the car.

The video then shows the officer firing at least two shots into the car, which then rolls away. The witness who shot the video then pans back where the officer is on his knees and being consoled by another officer.

Police are still investigating what led to the shooting. 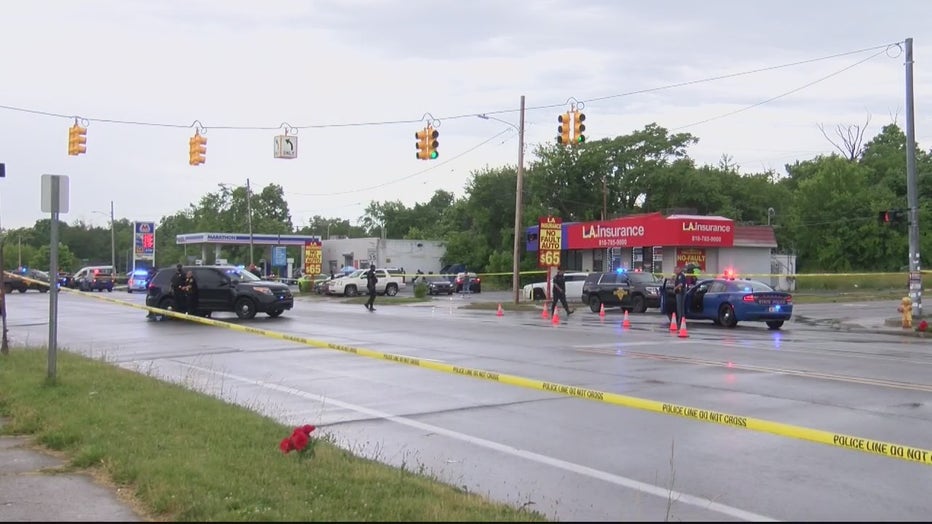 A Flint Police Officer and shot and killed a woman after she pulled up and started shooting at him, police say.