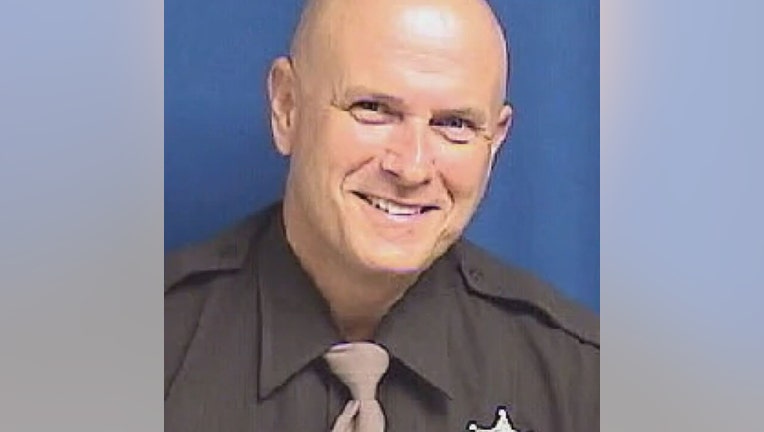 OAKLAND COUNTY, Mich. (FOX 2) - The wife of an Oakland County Sheriff's deputy who died in the line of duty around Thanksgiving in 2017 has filed a wrongful death lawsuit.

Sonja Overall, the wife of Eric Overall, who died on November 23, 2017, is suing Oakland, Lapeer, and Genesee counties, four Lapeer County deputies and the man who's been convicted of Overall's murder, Christopher Berak. The lawsuit is seeking damages in excess of $75,000.

Overall was hit by Berak and killed on M-15 at Seymour Lake Road as he tried to lay out stop sticks to stop Berak, who was being pursued by deputies from both Lapeer and Genesee counties.

Berak had gone to the Lapeer County Sheriff's deputy station earlier that day and acted strangely. When two deputies approached Berak in his vehicle in the parking lot, Berak drove off and the deputies got in patrol cars to pursue him.

A chase ensued, with Berak pulling over at least once for an attempted traffic stop before taking off again. During that time, the deputies heard comments from Berak that indicated he was suicidal and in mental distress.

A pursuit continued on WB I-69 into Genesee County and then went southbound on M-15 into Oakland County.

Berak is reported to have been driving at or near the posted speed limit during the pursuit and that he was staying within his lane. He was being followed by several patrol cars from both Lapeer and Genesee county at this point, with activated lights and sirens.

Eventually, a Lapeer County deputy told dispatch to instruct an Oakland County Sheriff's deputy to put out stop sticks, "even though [Berak] was driving near or at speed limit and wasn't posing a danger to the community," the lawsuit states.

Overall laid the stop sticks at Seymour Lake Road and M-15, where he was hit by Berak when Berak approached in his vehicle.

When Berak arrived, the lawsuit states he braked and intentionally steered his vehicle to the right of the roadway, hitting Overall, who was standing on the west-side shoulder of the road. Berak has been convicted and is serving a life sentence for first-degree murder.

The lawsuit states the "defendants’ acts of gross negligence, wanton, willful and intentional conduct, and deliberate indifference to the violations of Deputy Overall’s constitutional rights" caused his death.

The lawsuit states that Lapeer Couty and Genesee county were negligent in training their officers not to activate their lights and sirens when pursuing suicidal or mentally disturbed individuals.

The lawsuit also states that Oakland County failed to train its deputies in the safe deployment of stop sticks - and that video of the incident shows that Overall did not properly deploy the ones he set down as a result of lack of training.

The lawsuit also says communications between the three counties were disorganized and disjointed and caused confusion that contributed to Overall's death.

Moreso, it accused the four Lapeer County deputies of breaching their duties of care and created danger to the fellow law enforcement officer "when they pursued Defendant Berak with their overhead lights and sirens on when he was not speeding or driving erratically, and he did not present a danger to others."