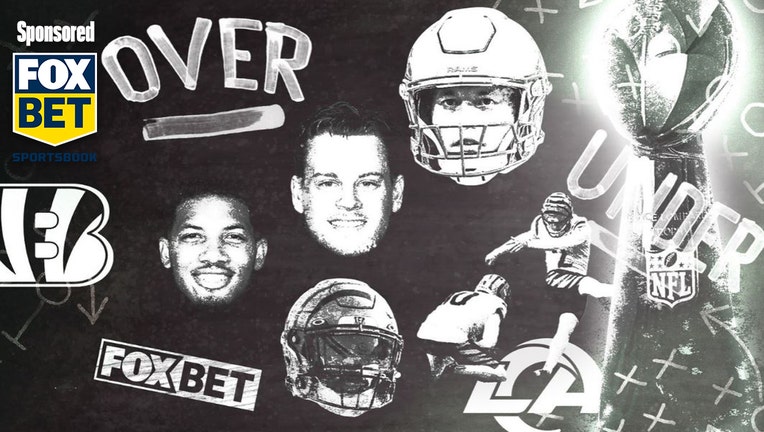 There are plenty of fun ways to wager on the Super Bowl. Geoff Schwartz explains how to bet on the Big Game and lays out his best bets.

It's Super Bowl week, so I'm here to help you enjoy the game and enhance your viewing experience!

Now there are plenty of ways to wager on the game. A basic moneyline bet is where you're just wagering on the winner or loser. You can also wager on a side, like Rams -4 in this instance. That just means the Rams need to win by more than 4 points for you to win your wager. There's also an option for betting on how many total points will be scored by both teams. This is called the total. For this game, the total is set to 48.5 points. If you wanted to bet on it, ask yourself, will the Bengals and Rams combine to score over or under 48.5 points?

Another fun way to wager on an NFL game is prop bets. To me, prop betting is similar to wagering on fantasy football. The easiest way to understand it is to ask yourself if player X will have more or less passing yards or rushing yards than the number the oddsmakers set. For example, will Matthew Stafford throw for more or less than 275.5 yards on Sunday?

You can also bet on team-related props, like whether a team will score a certain number of points or make a certain amount of field goals.

The options are endless for the Super Bowl when it comes to props, and the best part about these wagers is rooting for all the different outcomes throughout the game.

Now for the fun part. Let's get to my favorite prop wagers for the Big Game, with odds courtesy of FOX Bet.

I've been critical of Matthew Stafford as he played poorly in the season's final month. But I tip my cap to Staffy for his performances in the Rams' three playoff wins. He has completed 72% of his passes for 905 yards, throwing six touchdowns and one interception in that stretch. Stafford wanted out of Detroit for these types of moments, and he's come up big in Los Angeles' run to the title game.

Regarding the Super Bowl, I would expect Stafford's good run to continue against a Bengals' pass defense that isn't that special. The Bucs and 49ers were ranked in the top 11 in pass defense, and Stafford went for over 300 yards against each. The Bengals rank in the bottom third in pass defense, which means the signal-caller should be able to move the ball.

I don't believe the drop-8 coverage that worked against the Chiefs will catch the Rams by surprise. I see Stafford having a big Super Bowl Sunday and eclipsing this mark.

I'll keep this simple: The Bengals' offensive line will struggle against this Rams' defensive line. Cincinnati has allowed 59 pressures in the three postseason games while rushing for just 3.62 yards per attempt between mostly Joe Mixon and a handful of carries from Samaje Perine. And it doesn't get easier. The Bengals will now face the best defensive line in the playoffs with Aaron Donald, Greg Gaines, A'Shawn Robinson, Von Miller and Leonard Floyd manning the trenches.

The Rams' rushing defense shut down the great Niners' rushing attack, only allowing 50 yards on the ground. And that's after allowing just 51 yards to Tampa Bay and 61 to the Cardinals. This is why I fail to see a path for Mixon to have a monster game against this Rams' front.

Joe Burrow has only exceeded this number once in his three playoff outings, and it was in the game where he was sacked nine times by the Titans. That seems counterintuitive as sacks should equal fewer opportunities to push the ball down the field.

However, being sacked on first or second down just means you have more opportunities to gain yards with longer fields. Negative yards from sacks do not count toward individual passing yards, and this is how Burrow threw for 340 yards while getting sacked nine times.

I believe this is precisely how it will go down in the Super Bowl. I see a 5-yard pass on first down, followed by a 9-yard sack on second down and then a 15-yard completion on third down for a first down. That's 20 yards of passing while technically gaining 11 yards for that first down. Look for some variation of that sequence all game.

The Rams have an outstanding pass defense as I've detailed above. They finished the season ranked 10th in DVOA for pass defense and have ranked second throughout the playoffs. The Rams excel at attempting to confuse quarterbacks with switching coverages at the snap, and because of shutdown corner Jalen Ramsey, it's difficult for the first option to be open for their opponents.

But, Los Angeles' success at stopping the pass does not extend all over the field. The Rams are poor at stopping passes in the short middle of the field. They finished the season ranked 29th in that area and have continued to struggle in the postseason with this issue.

On the flip side, since Week 7, the Bengals' combination of quarterback Joe Burrow throwing to receiver Tyler Boyd in the short middle of the field has that connection ranked first in completion percentage, yards per attempt and passer rating in the NFL during that span. And with Cincinnati's tight end C.J. Uzomah questionable for the game, this connection between Burrow and Boyd will be needed for the Bengals to move the ball.

The number for Boyd is only 40.5 because he's technically the third option in this offense and has failed to go over 40 yards in their last four games. However, he went well over that number in Weeks 13-16. I believe this is a good spot to buy low on Boyd.