Comerica Park dimensions to be smaller, more hitter-friendly for 2023

Some new changes are coming to Comerica Park in time for the Tigers' new season this spring.

DETROIT (FOX 2) - This summer at Comerica Park will bring more home runs as the Detroit Tigers and Comerica Park have announced they're bringing in the center field wall by ten feet and lowering the height from 13 feet at its highest down to 7 feet across the entire outfield.

The Tigers announced the changes on Wednesday, three months before Opening Day against the Boston Red Sox. According to a press release from the team, they gathered feedback from fans, players, and front-office stakeholders to make the adjustments.

Among the changes is bringing the center field wall in to 412 feet, lowering the outfield walls from 13 feet at its highest in right-center field to seven feet across the entire span of the wall. Comerica Park has the deepest center field in MLB at 422 feet, despite a posted distance of 420 feet.

Right field and left field won't be affected by the changes. However, the measurements are going to be more accurate. The team said the left field corner will be relabeled from 345 feet to 342.

Comerica Park has long been considered to be a pitcher-friendly park because of the expansive outfield but it used to be even bigger. In 2003 when it first opened, the left field power alley was 395 feet. It was brought in to 370 feet in 2003, where it remains today.

The field's original design was done thanks to the design of Tiger Stadium, with a center field of an astounding 440 feet but shorter dimensions to right and left fields. 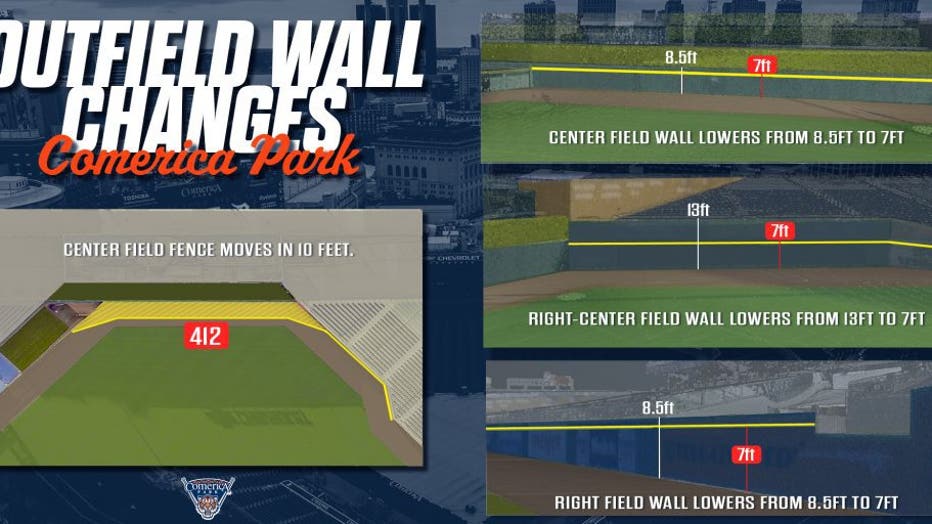 Comerica Park will be a bit smaller starting next year as the Tigers announced the outfield wall be brought in by ten feet.

Hitters have complained about the dimensions for years, most notably Nick Castellanos in 2019 who said the park was a joke.

"It's to the point where how are we going to be compared to the rest of the people in the league in terms of power numbers, OPS, slugging and all that stuff when we got a yard out here that's 420 feet straight across center field?" he said to the Detroit News

The Tigers said the changes will reward hitters who can hit to the deepest part of the park, while maintaining the high number of doubles and triples. The lowered height will also allow defenders the chance to rob home runs.

"This has been a topic of conversation for quite some time within our organization," said Scott Harris, Detroit Tigers President of Baseball Operations. "We’re confident that this plan accomplishes our goals of improving offensive conditions on the hardest hit balls, while maintaining Comerica Park’s unique dimensions and style of play. These updates come after a great deal of research and feedback from all stakeholders in and around the organization, including our fans, players and front office. The outfield wall changes, combined with new rules from Major League Baseball in place this season, have the potential to create even more excitement and on field action for years to come."

The dimensions haven't stopped Miguel Cabrera, who was hit 507 home runs and has a lifetime average of .308. The Tigers star said this year will likely be his last as he prepares for retirement.