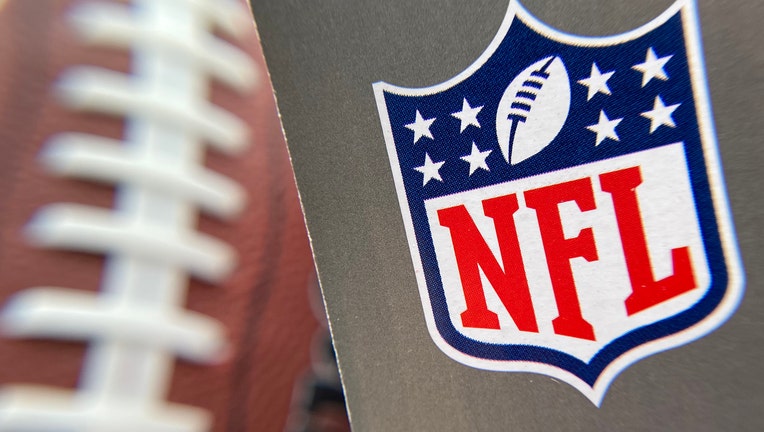 The NFL logo is seen on a football packaging in Los Angeles on August 24, 2020. - A rash of COVID-19 results that forced multiple NFL teams to adjust their weekend training plans were false positives due to "isolated contamination during test prepara

DETROIT (FOX 2) - The Detroit Lions aren't playing on Sunday as the matchup with the Green Bay Packers is set for a Monday night showdown but that doesn't mean there's nothing to watch - especially on FOX.

The Lions will play the Packers at 9 p.m. on FOX 2. The Monday Night Football game is being done by the team at ESPN but FOX 2 will broadcast the game locally for Detroit viewers. Just like every other Sunday game, we'll get you started with FOX 2 Gameday Live starting at 7 p.m.

The game kicks off at 8 in Lambeau Field in Green Bay as the Lions look for their first win of the short season and you can watch it all on FOX 2.

But we're not here to talk about Monday's game. You're looking for details on Sunday's NFL action. There's good news for those Matthew Stafford fans out there as he'll be back on FOX 2.

FOX BET: Double Your Money on FOX Bet if the Lions score a TD against the Packers

We'll get your Sunday started right with Lions Gameday starting at 10 a.m. on FOX 2. Yes, we know that the Lions play on Monday but you're looking for NFL action with your breakfast! We got you covered!

Then we'll hand off to the guys at FOX with NFL Kickoff starting at 11 a.m., followed by FOX NFL Sunday at noon before eventually handing over to the game on FOX 2. Here in Detroit, we get to see Stafford back in action as the Los Angeles Rams are playing the Indianapolis Colts starting at 1 p.m. on Sunday.

You catch all of the FOX games on the FOX Sports app - for free! The app is free but does require authentication with your cable or satellite provider. So if you're out mowing the lawn or out with friends, you can still watch the game on your phone.

After the game will be the NFL on FOX Postgame show followed by NHRA in North Carolina and FOX 2 News at 6:30 p.m.

What's really cool is that you can actually win $1 million with FOX Super 6 - without paying a single cent.

All you have to do is download the FOX Super 6 app (or open it up if you already have it installed!), click through to the NFL Sunday Challenge, and pick who will win and by how many points in six of the top games on the Week 2 schedule. It's really that easy (and free).

To win, you have to predict the outcomes of 6 games.

The game this week include:

And to help you get to the pay window, FOX Sports' Jason McIntyre put together his picks that includes some insight on how you might want to approach each game against the spread at FOX Bet.

We know that there are more games to watch on Sunday with CBS airing the Las Vegas Raiders at Pittsburgh Steelers at 1 p.m. and then the Dallas Cowboys at Los Angeles Chargers.

The Sunday Night Football matchup is an AFC battle between the Kansas City Chiefs and Baltimore Ravens.