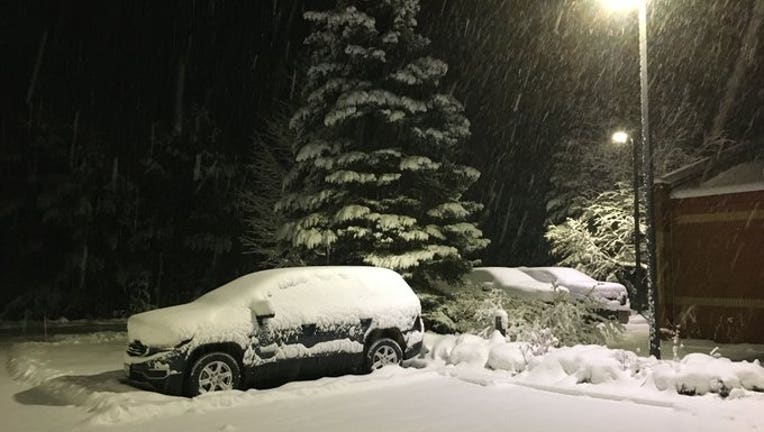 (FOX 2) - The National Weather Service in Marquette says two different snowfall records were broken this weekend in Michigan's Upper Peninsula as over 8 inches of snow fell Sunday and almost 20 inches of snow is already on the ground.

The NWS reported 8.3 inches of snow on Sunday, breaking the previous record of 3.1 inches which was set in 1976. Additionally, that brought Marquette's total snow for the entire month of October to 19.2 inches, breaking the old record of 18.6 set in 1979.

While snow in October is not rare for the Upper Peninsula, this much snow is clearly not expected.

But the snow isn't over. The area will likely go over 20 inches of snow on Monday with another 1 to 3 inches of snow expected followed by record lows.

Watch out for a few pockets of mist and drizzle as you are heading out the door on Monday. We are expecting temperatures only in the mid and upper 40s this afternoon under cloudy skies. Through this afternoon, be on the lookout for a stray shower from time to time. Temperatures are expected to fall into the 30s overnight. Thankfully, more sun is in our forecast by Wednesday along with more mid temps. As we head toward the Halloween holiday, look for more sunshine and cooler air.

Down here in the lower peninsula, only a few flakes have been spotted in the northern lower peninsula but not in the Detroit area. Of course, that's temporary.

With Halloween approaching, this week we'll see highs in the 40s and lower 50s but still staying above freezing until Friday night.