More rain to come, but the end is in sight

Derek Kevra has the forecast.

SOUTHFIELD, Mich. (FOX 2) - Some of the heaviest rain is behind us, but SE. Michigan is looking at another half-inch to one inch of rain continuing Wednesday overnight.  Strong winds are moving through the area, while the blanket of heavy rain has let up a bit.

Heavier rain is expected between 10 p.m. and 4 a.m. Thursday. Derek Kevra says after that, expect spotty showers through most of Thursday - but thankfully without Wednesday's prolonged intensity. Rain totals for most of the area will be about three to four inches.

Cloudy conditions and temps in the mid to high 50s will persist overnight and through Thursday with an expected high of 58.

By Wednesday night, there were 77,000 DTE Energy customers without power - a large amount concentrated in Oakland County, which received the most rain at about five inches so far. CLICK HERE for the outage map.

The rain started in earnest around 5 p.m. in Metro Detroit on Tuesday. It didn't stop overnight and several common areas for flooding, especially on roadways, flooded. On east McNichols under a railroad bridge, multiple cars were stalled out and submerged in water.

If you notice your street is flooding, you can go out with a shovel or rake and clear the drains to help the water makes its way into the gutter.

River levels in southeast Michigan have hit flood stage and almost all of them in Metro Detroit's rivers are under a flood warning.

The flood watch will continue all day and through the night and is set to expire Thursday morning. Remember a flood watch means flooding is possible, while a flood warning means FLOODING IS HAPPENING. 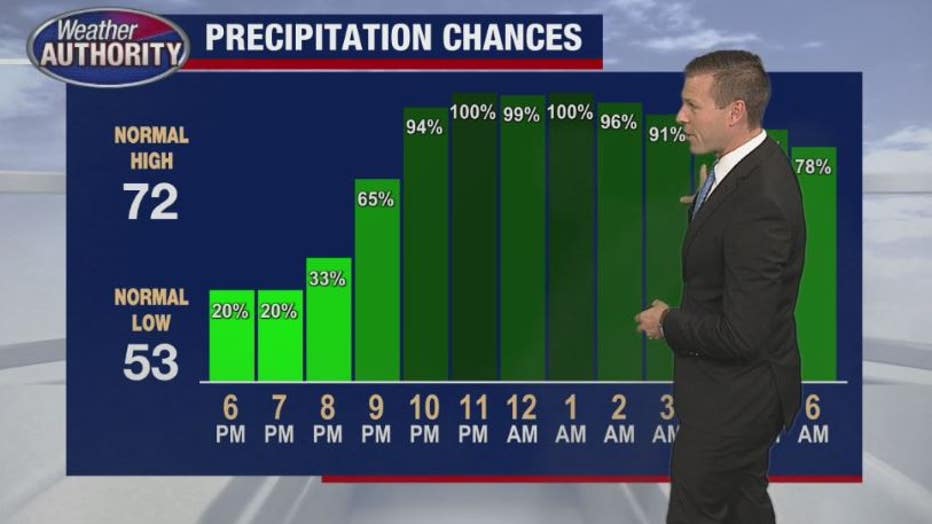 Related: What's the difference between a flood and a flash flood?

While most of the area remains under a flood watch until Thursday morning, we've already seen several inches of rain, specifically in Oakland County where the totals have hit 5.5 inches in Farmington Hills and West Bloomfield over 24 hours. Pontiac also is reporting 5 inches of rain.

The problem isn't with all the heavy rain at once like we saw in the summer. This is more of steady rain that is unrelenting. Radar shows the weather system pushing up from Ohio and basically continually passing over southeast Michigan. 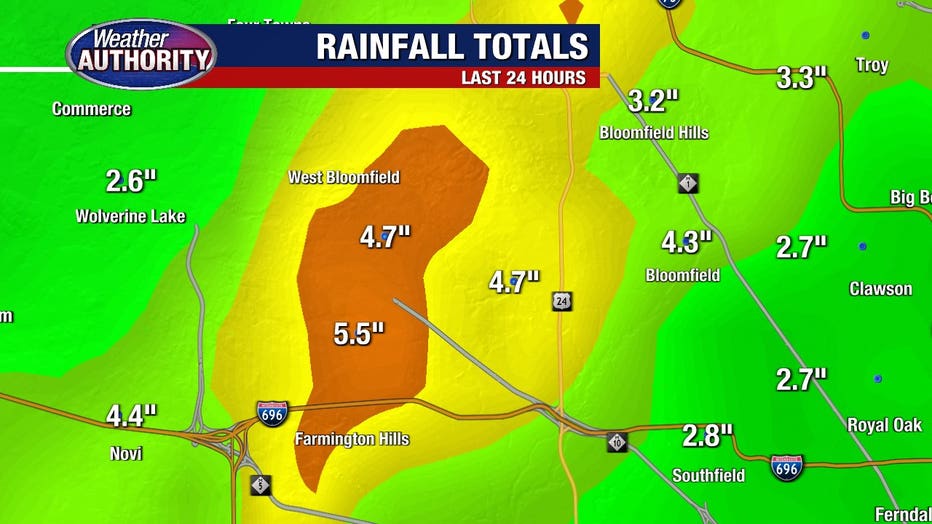 The rain is going to continue all day on Wednesday and into Thursday morning. By the time it finally pushing north of us, we'll have another inch or two of rain.

Thursday morning, the rain will finally move out for the most part - but we'll still probably see scattered showers throughout the day on Thursday.

Finally - FINALLY - the rain will end with Friday in the 70s before we see another chance of rain Saturday morning and then comfortable fall weather settles in for the start of next week.