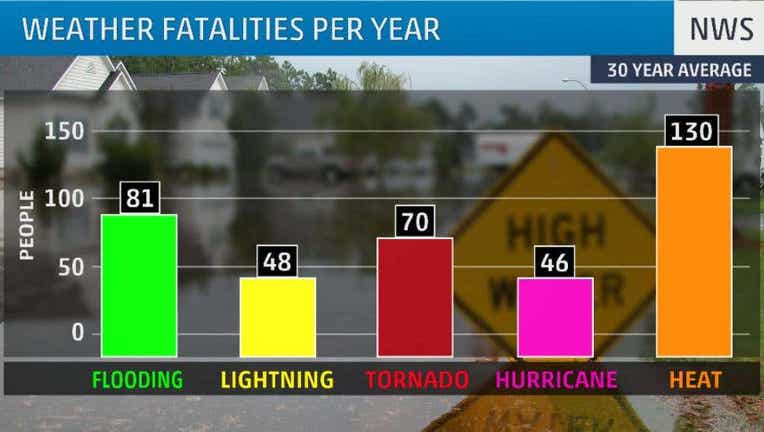 DETROIT (FOX2) - Flooding is the second leading cause of weather related fatalities in the United States, surpassed only by summer heat. Floods kill more people each year than tornadoes, hurricanes or lightning. 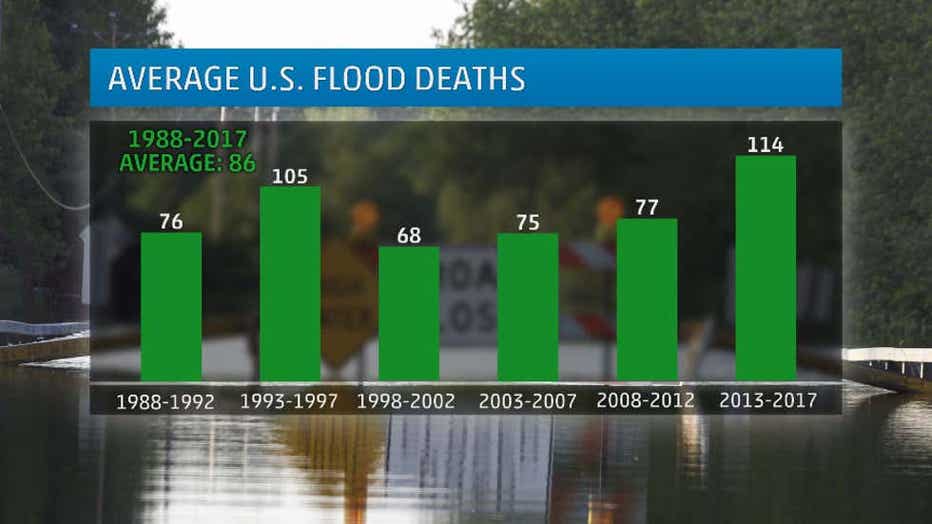 The National Weather Service estimates the annual average number of flooding deaths has increased from 81 to 95. Of course, there are exceptions to those statistics.        2015 recorded 189 flood fatalities; the majority of them male. 2016: 186 fatalities.    2017: 180. By contrast 2020 recorded 59 fatalities, perhaps because many of us were staying inside. Still, you get the point. Many flood fatalities could have been prevented by simply turning around when confronted with fast moving water. 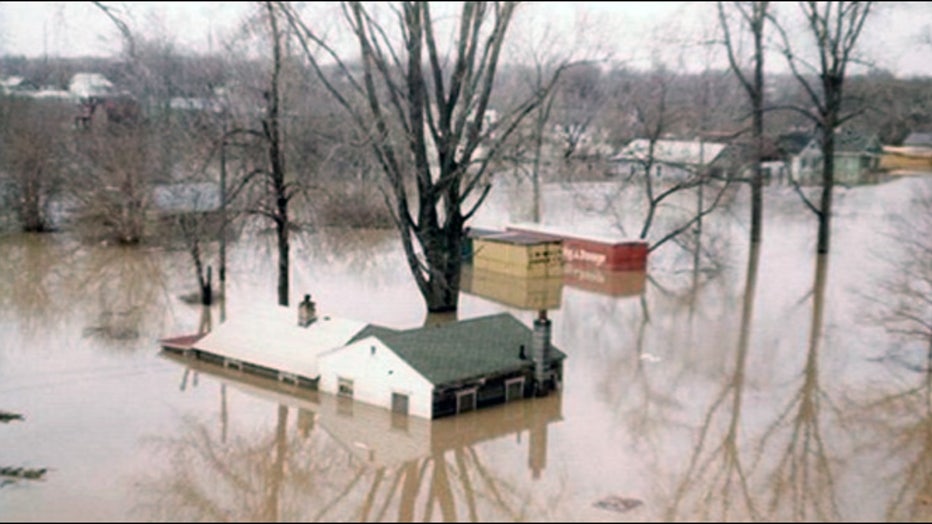 NOAA defines flooding as "an overflowing of water onto land that is normally dry." This abundance of water can occur after a hard rain, excessive spring snow melt, dam or levee failure. Wind direction can play a part. Lakeshore Flood Advisories, Watches or Warnings are often issued for Macomb, Monroe and Wayne counties where strong northeast winds lead to higher water levels on the shoreline of Lake St. Clair, from St. Clair Shores down to the Detroit River. 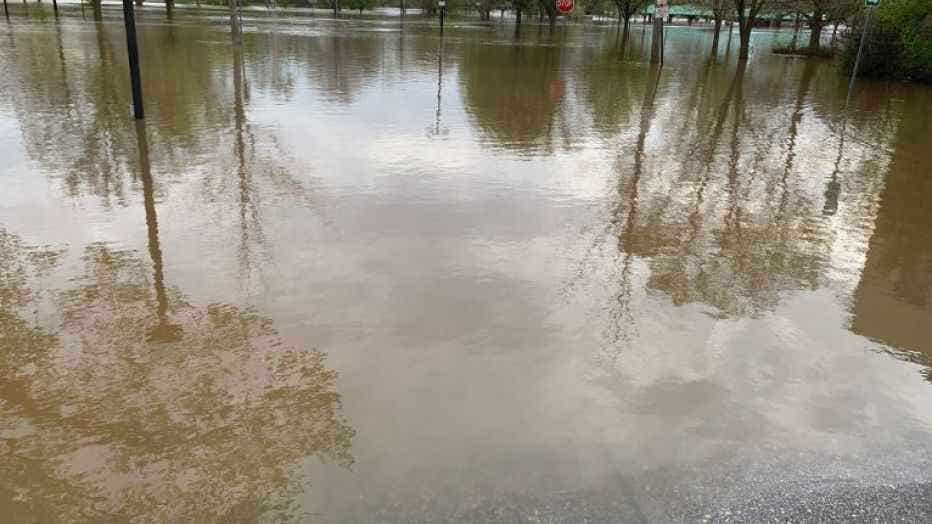 You can point to 2020 as an example. Lakeshore flooding was a part of Michigan’s worst flood in history last year (surpassing significant floods from 1986 and 2014). After a 4"-7" rainfall that began May 17, 2020 and lasted for two days, historic flooding occurred along the Tittabawassee River in Midland county, forcing 10,000 Midland residents to evacuate. Strong east to northeast winds associated with low pressure brought significant lakeshore flooding along the shorelines of Lake Huron, Lake St. Clair and Lake Erie. Along the St. Clair River in Macomb and St. Clair counties, water levels exceeded flood stage.

In most flood fatalities, the power of water is underestimated. Especially in the case of flash flooding. 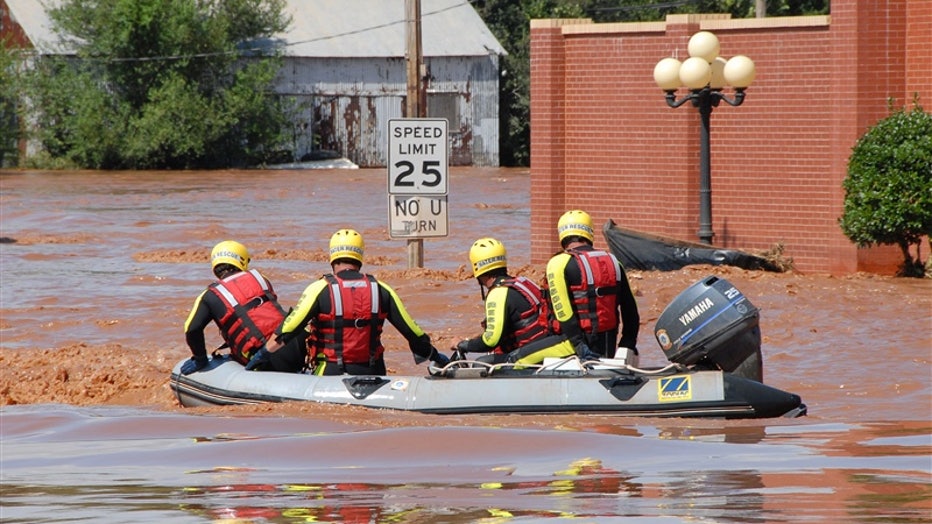 Flash Flooding is the result of water rising rapidly in a short period of time. That’s why it catches so many people off guard.

Know these terms when it comes to flooding.  A quick rule: Warning mean conditions are happening now, take action. A Watch means conditions are favorable, get prepared.

Lakeshore Flood Warning: Lakeshore flooding is imminent or likely within the next 12 hours. Take immediate action.

Flood Watch: Prepare yourself. Issued within 36 hours of flooding.

Lakeshore Flood Watch: Lakeshore flooding is possible. This watch is usually issued 12 to 36 hours in advance. Time to prepare.

Urban or Small Stream or Lakeshore Advisory: Statements issued to give information on river or stream flows or ponding of water in urban or other areas.

Use common sense. Don’t navigate around road barriers or signs that warn about flooding. There could be washed out roads ahead; why take the chance?

Stay away from fast moving water or flooded areas. It only takes a few inches of water to cause you or your vehicle to lose contact with the road. Get to higher ground if you live in a flood prone area. If flooding occurs in your house, don’t go into any room where electrical outlets or cords are submerged. If you’re told to evacuate, leave immediately. Only if you have time should you disconnect utilities and appliances. This one is obvious: Don’t camp near a river if there is a storm threat.

Respect the power of nature. During a flood, water can rise and move quickly. Be prepared!

Up Next: Tomorrow is the statewide tornado drill for Michigan. Time to put your emergency plans together!