DETROIT - Metro Detroit is getting one of its heaviest dumps of snow this winter as an expected 4 inches of precipitation is expected to fall in some parts of Oakland, Wayne, and Macomb County.

Forecasts say snow will lighten late into the morning with flurries expected again throughout the day as Southeast Michigan hovers in that just-below-freezing temperature zone.

That temperature range is actually the best condition for commuters to have when it comes to salt effectiveness on the roadways - but that doesn't mean caution should be thrown to the wind.

Cold and wintry start to the day

It's going to be a snowy and cold Tuesday with an expected 4 inches of precipitation expected over the course of the day for much of Metro Detroit.

Snow has been falling throughout Tuesday morning with it beginning to accumulate around midnight. A big weather system was met with cold air from the Rocky Mountains, colliding over the Midwest and moving on to the Northeast.

Michigan is getting hit with some of that weather but not the bulk of it.

Southern Michigan counties like Hillsdale and Monroe will see about 1-2 inches of snow. Wayne and Washtenaw counties will see a little more and then between 3-4 inches is expected for Oakland, Macomb and Lapeer counties.

A wave of heavy snow is expected to finish in Detroit within the hour and move on to Rochester Hills.

Temperatures will peak at 32 degrees which means roads won't be covered in snow due to salting. MDOT cams over Jefferson and I-94 showed relatively smooth driving for commuters - but precautions should always be taken at times like these. 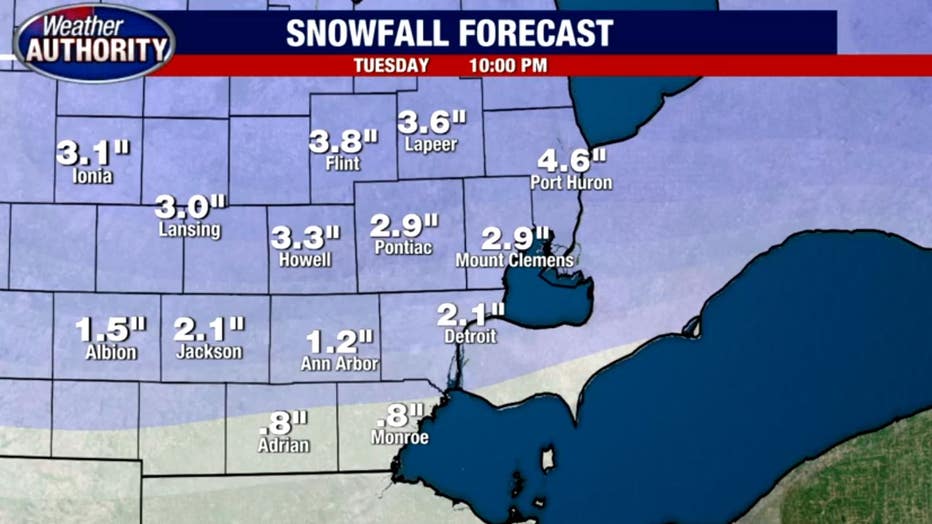 Temperatures are expected to take a tumble after that, falling into the teens later on.

This might be the most snow to fall in one sitting, but after the system passes, Michigan will still be far below average for snowfall this year.