Rich Luterman breaks down what we can expect.

The NWS issued the warning a little after 3:30 p.m. on Wednesday and it will go into effect at 3 p.m. on Thursday for all of Metro Detroit including Wayne, Oakland, Macomb, Monroe, Wasthenaw, and Lenawee Counties. The same areas are also under a wind advisory on Wednesday until 8 p.m. and a flood watch until Thursday afternoon.

When will the snow start to fall in Southeast Michigan?

FOX 2 Meteorologists have been tracking this incoming weather event all week with conflicting models giving different data. As we get closer to it arriving, it looks like southeast Michigan is going to get significant snowfall.

On Wednesday, Metro Detroit hit close to 50 degrees but with a strong southern wind. That wind will stay but shift as a cold front comes in and it brings a lot of moisture. 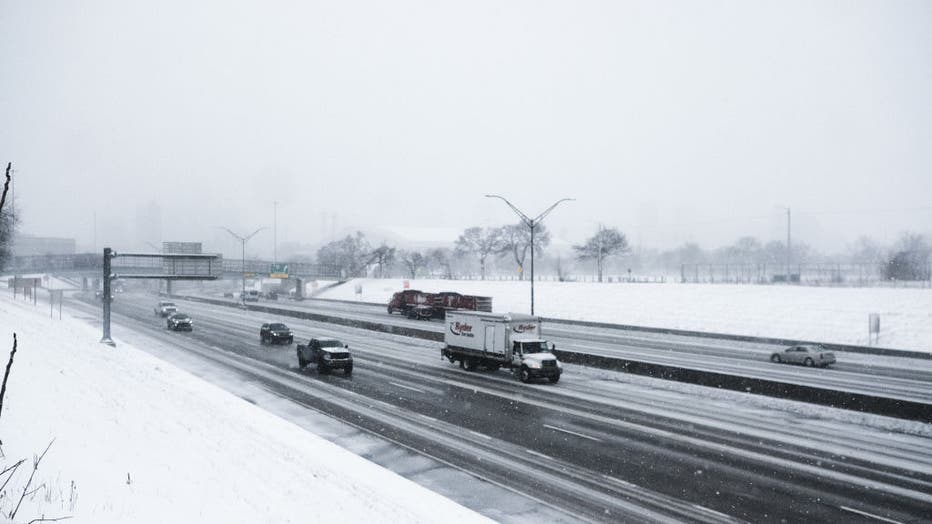 Vehicles travel along the Interstate 75 highway during a snow storm in Detroit, Michigan, U.S., on Thursday, Feb. 3, 2022. . A large storm crossing the U.S. has triggered winter storm warnings, watches and weather advisories from New Mexico to Maine.

Due to the warm air, it will start as rain but the temperature will plummet. It then turns over to snow and it looks like we'll be shoveling a decent amount, with estimates ranging from 4-8 inches.

The latest forecast for snowfall shows flakes will begin falling around 10-11 a.m. on Thursday, depending on where residents live. It's expected to fall throughout the day and end around midnight.

Wind, rain, sleet and snow are all moving into Southeast Michigan

By the time we get to Friday, we're expected to have up to 8 inches of snow on the ground as a major winter storm moves into Metro Detroit

The snow that drops earlier will be wetter and heavier as it transitions through the day.

While up to 8 inches of snow is expected, drivers commuting home Thursday evening should only have to manage between 2-4 inches on the ground. Temperatures will plummet when night arrives, which means the potential for ice Friday morning. It could create troublesome driving conditions for Friday travel.

Strong winds and warm temperatures will be around for much of Wednesday afternoon and evening. The rain will start falling around that time.

RELATED: Strong winds, a flood watch, and 4-8 inches of snow; the latest forecast for Southeast Michigan

The National Weather Service has announced a Flood Watch for much of Southeast Michigan due to the potential for heavy rain falling on frozen ground. "Flows in rivers may increase quickly and reach critical levels," an alert from NWS said.

The advisory will remain in effect until Thursday afternoon. It includes St. Clair, Oakland, Macomb, Washtenaw, Wayne, Lenawee, and Monroe Counties. Most major cities in those counties are included in the advisory.

MORE: What to have on hand if the power goes out during a winter storm

The runoff could lead to flooding in rivers, creeks, streams, and low-lying and flood-prone areas.