DETROIT (FOX 2) - "This year I was really ready to go in and get it done and then this happened," said Michelle Danner. "This was so devastating."

Michelle Danner bought a blighted Detroit property on Taylor Street from the Land Bank Authority in April of 2020. She is currently renting a residence in Warren, she hoped to create a permanent home for her and her four young grandchildren.

Michelle Danner bought a blighted Detroit property on Taylor Street from the Land Bank Authority in April of 2020. She is currently renting a residence in Warren, she hoped to create a permanent home for her and her four young grandchildren.

Last week, their dreams were dashed when thieves broke in and stole $20,000 worth of items she bought for the renovation.

"I don't know what to do," she said. "I don't have the money to start over and it is really sad."

Danner kept the receipts. It was a worker who came to the house to install $4,000 worth of windows and realized they were gone.

She says the brazen thieves took the hinges off the doors and walked away with her countertops, cabinets, drywall, a generator, toilet, sink, floor tiles, and even a bathtub.

And sadly, this isn't the first time.

"I really don't know, I think people sit back and watch and see what is going on," said Danner. "It is very unfortunate someone doesn't get out and get a job. You know, take care of yourself and stop taking from other people.

"I am not rich, I work hard for what I have, and it's unfortunate someone would just take it without any regard."

A complaint was filed with Detroit police who plan to investigate. This is the second Land Bank house under renovation, hit by thieves in the last week.

Porshe Richards, who also bought a house from the Detroit Land Bank, had $10,000 worth of doors and windows stolen from her.

But in the end, Danner's heart breaks for her grandchildren ranging in age from 4 years old to 10, who will have to wait even longer to call this house a home.

"What I've been looking forward to the most, is having a nice quiet day and just feeling like it is home," said Skylar Danner. 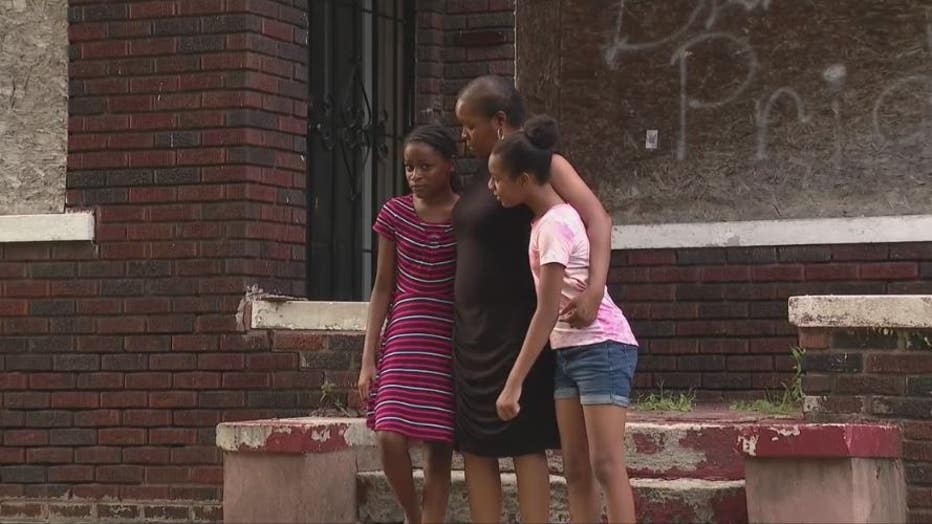 Michelle Danner hugs two of her grandchildren in front of her Land Bank House.

"It makes me feel sad mad because they just broke into a house my grandma put a lot of money for stuff, took it and left," said Grace Gates.

"We work hard for things and people just take it away from you," said Michelle.

>>There is a GoFundMe set up to help the grandmother. CLICK HERE to donate.

The Land Bank does provide discounted security to those renovating properties - HERE.