Two men told the owner of a Livonia party supply store that they had a gun before tying her up with balloon ribbon and stealing money from the cash register.

LIVONIA, Mich. (FOX 2) - The owner of a Livonia party supply store was helping a mother and her 6-year-old pick out balloons Sunday afternoon when two men walked in acting like they needed help.

The men, who had their faces covered with bandanas, walked up to the counter of The Celebration Station at 6 Mile and Middlebelt roads around 12:30 p.m. and told owner Joan Bates that they wanted balloons but didn't know what to get. They lured Bates out from behind the counter.

"I felt the gentleman come up behind me, put his arm around my neck and I honestly thought he was joking. I said, ‘Is this for real? Are you going to rob a balloon store with a 6-year-old child?’" Bates said. "He said, ‘Shut up or I’m going to kill you.’"

The men said they had a gun and ordered everyone to get on the ground. Then, Bates' niece walked into the store.

"When I got down next to my niece, he had us put our wrists together and grabbed a spool of balloon ribbon, purple, my favorite color. Not anymore," Bates said.

The men emptied a cash register and took money from a lockbox before fleeing with more than $600. 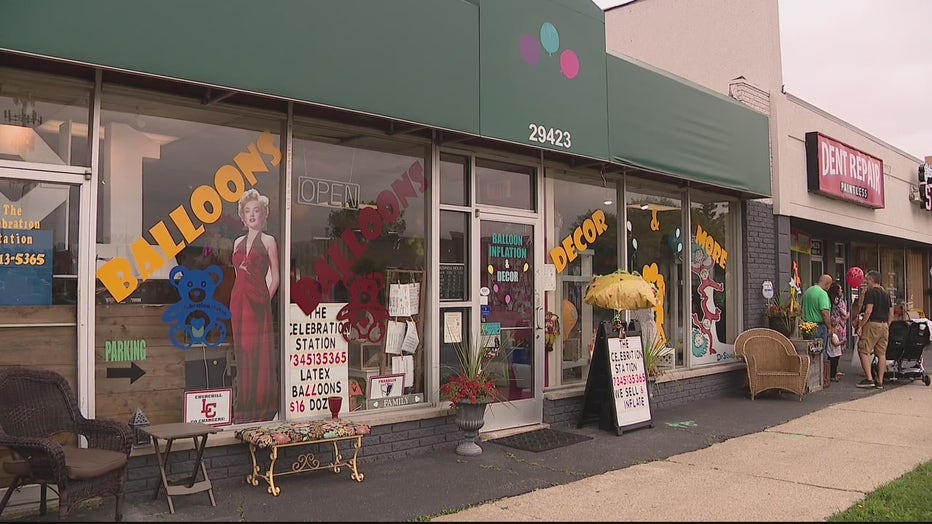 Bates and her husband Doug usually watch their grandchildren at the store, but now they are scared to do so.

"I don’t even feel safe for them to be here, which is so unfair," she said. "I will find a way to make this a celebration store again."

Police said they are working to gather surveillance video from nearby businesses and shared descriptions of the men.

The first suspect is described as a black man who is about 40 years old. He is about 5 feet, 7 inches tall, and has a medium build. He was wearing black pants, a red hooded sweatshirt, and black shoes.

The second suspect is described as a black man who is about 30 years old. He is about 6 feet, 1 inch tall, and has a medium build. He was also wearing black pants, a red hooded sweatshirt, and black shoes.