ORION TWP., Mich. (FOX 2) - A 4-month-old baby boy is expected to recover after being found left in a wooded area in Orion Township Wednesday morning.

The Oakland County Sheriffs Office believes the mother has had issues with prescription drug abuse. Her mental and physical well-being is being evaluated by investigators.

A 4-month-old baby boy is expected to recover after being found left in a wooded area in Orion Township Wednesday morning.

At this point it is not known how long the baby was there before being discovered in the late morning hours, 30 minutes after being reported missing. A startling photograph shows a baby taken right after sheriff's deputies found him alone.

Investigators say a 37-year-old woman was wandering around a neighborhood near Joslyn and Waldon acting erratically, hiding in bushes, ringing people's doorbells saying she was being chased.

She was then seen banging on doors at the nearby middle school. In talking to investigators she said something that led them to believe that at some point, she had a baby with her.

But the baby was missing. Burs on her clothing tipped them off that the baby may have been left in the woods. 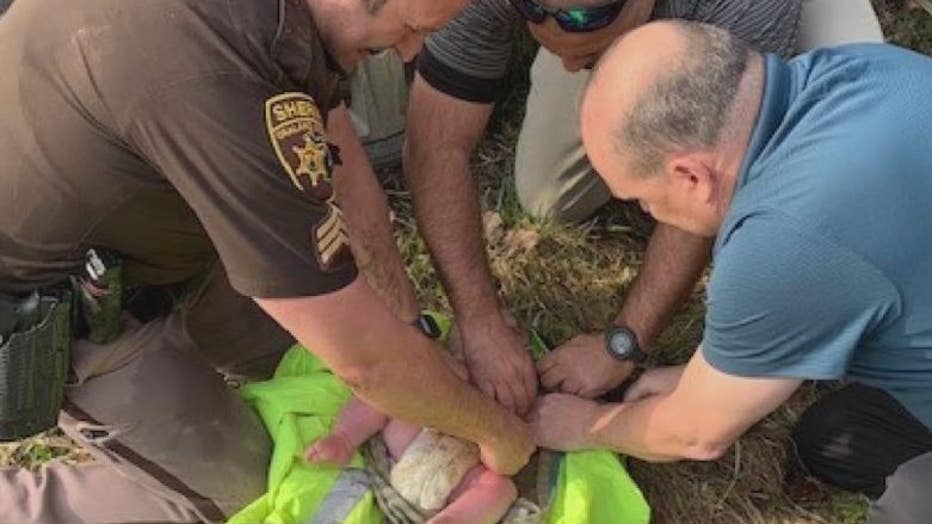 "At one point I saw them running, but I couldn't make out where, or what was happening," said Emily Stetson who lives in the area.

They started searching a wooded area nearby and within 30 minutes and they found the 4-month-old baby boy alive, but suffering from hypothermia.

"So innocent and just to thrown into such a crazy situation," said a neighbor.

"We used to live right down there, my dad was saying if they would have knocked on the door I would have taken the baby, at least so the baby is safe," said Jason Meek.

Both the baby and the mother were taken to an area hospital for treatment.

Deputies said the boy was in a wet sleeper and was wrapped in warm blankets before being taken to the hospital for treatment and observation. The child is expected to be kept overnight and is in the care of Child Protective Services.

"Thankfully, deputies were able to determine a baby was missing, which triggered an immediate large response and search, and they were able locate the child," Sheriff Michael Bouchard said. "Their quick work avoided what could have been an unspeakable tragedy."

Deputies say a warrant is being sought for the mother's arrest on suspected child abuse.

Michigan has a Safe Haven Law that allows parents to surrender a newborn within 72 hours of birth to an emergency medical service provider. That means an employee on duty at any fire department, hospital, or a police station.