A microcosm of the country's tension behind mandatory face mask orders made an appearance at a Detroit bar Wednesday when a bartender began to berate a customer over the face covering. However, in a role reversal of what's traditionally being caught on camera, it was the customer complaining the server wasn't wearing her face mask. This latest confrontation took place at Starter's Bar and Grill on Plymouth on the city's west side.

Andrea Williams said her waitress was excellent, saying she had her mask on the whole time. But her issue was with the person who was speaking above her food, which caused her to get angry and start recording the staff member. "She was speaking over everybody's food."

Snapping footage of the bartender, who appears to have been wearing her mask on her chin and not covering her mouth or nose, Williams requested the employee to not speak over her food. "...she began to berate me and call me names and nobody was able to calm her." Williams claims the bartender even talked about fighting her. 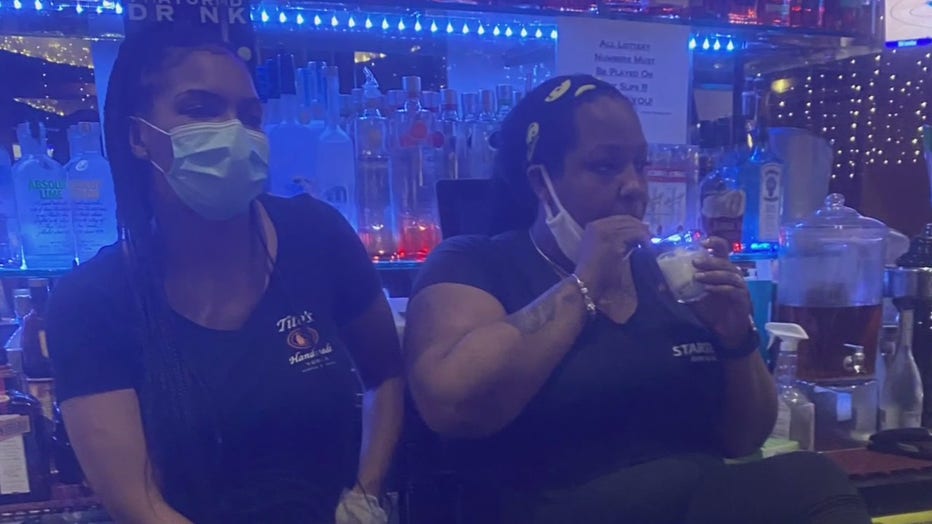 "It was just a lot of very derogatory, 'People don't really know' 'I'll beat this (expletive). She called me the b-word, I would say, about 20 times," she said.

The staff at Starter's say the incident was isolated and the bartender has been suspended while they plan to retrain their staff on CDC safety measures.

The bartender unleashed a tirade at Starter's Bar and Grill and spoke of fighting the customer.

The footage and subsequent argument have waded Starter's into a culture war that is challenging much of America as more states find themselves in the mask order column. Michigan joined the group a couple of weeks ago after seeing its first rebound in COVID-19 cases - a trend reaching extremes in other states and doesn't appear to be slowing down.

As evidence of face mask's effectiveness at slowing the spread of the coronavirus grows, so does an understanding of how the virus itself transmits. Only a short time ago scientists were pressuring the World Health Organization to acknowledge the pandemic can go airborne without the assistance of water droplets, meaning it can spread without coughing and sneezing.

In fact, models from disease experts measure near-universal wearing of masks or cloths around the mouth and nose can prevent upwards of 28,000 deaths in the U.S. before October.

In Michigan, 6,101 people have died and 71,842 have been infected. After a spike in daily COVID-19 cases on Wednesday, another daily report fell to 645 on Thursday. That's far from the daily low reported in June of 74 cases. However, Michigan has also dropped 29th in COVID-19 cases per capita among states.

Following a ProPublica expose into the incarceration of a 15-year-old Metro Detroit girl who a judge jailed for not doing her homework, clippings of the larger story have started to develop. As protesters demonstrated at Groves High School in Birmingham, arguing the punishment was unnecessary and race played a factor, the husband of the judge who oversaw the case is claiming there's more to the story than what's been published.

"The public is being misled," argues Ed Lennon, an attorney who is married to Mary Ellen Brennan, a judge in the family division of an Oakland County circuit court.

Lennon says the biggest misconception about this case is "that this is just a young woman who went to Children's Village (a juvenile detention center) simply because she didn't do her homework."

"She committed multiple assaults on her mother, and one of the choices my wife had to make is, was she going to send her back to the home while there was a stay at home order in place so that those two people could be in the same house and her mother may potentially be subjected to more assaults by her daughter," he said.

Attorney Ed Lennon says that in any juvenile case, there are facts and documents that are not made public.

Following the story's posting, a deluge of support from public officials has pushed the viral story into the upper echelons of the country's debate surrounding race. The girl who is jailed, identified as Grace in the story, is black while Judge Brennan is white. Protesters at Groves High School on Thursday argued that dynamic played a factor in the punishment.

"I graduated with a lot of children on probation, kids on probation that went to Michigan that didn't do their school work and went to Michigan. The difference between them and Grace is that they were white, they were rich and they could afford expensive lawyers." Jacqueline Hentschel said.

"If this were a white girl living in a big house in Birmingham, this would not have happened," Ruth Rothenberg said. "This girl should have never put in Children's Village, this is absolutely outrageous."

Oakland County Executive Dave Coulter has called for an investigation into the teen's sentencing.

The people attending the caravan and rally for justice put on by Michigan Liberation say this isn't just about getting Grace out and finding a solution to her situation. They say it's broader systemic racial inequities that potentially permeate every exchange, every reprimand, every judicial decision affecting minors in the justice system.

Two hospitalized after early morning shooting at a hotel

Two hospitalized after overnight shooting at hotel on East Jefferson

A 22-year-old man is in critical condition and a 42-year-old woman is stable resting in a hospital after police say a man pulled up in a vehicle and started shooting near a Baymont Inn on Jefferson Avenue near Adair Street.

Two people have been hospitalized after a shooting took place at 1 a.m. near a Baymont Inn on the city's east side.

Detroit Police say someone pulled up to the hotel in a vehicle, fired shots and then took off. Located on East Jefferson near Adair Street, there were police lights and caution tape around the scene for hours after the shooting.

Currently, a 22-year-old man is in critical condition and a 42-year-old woman is in stable condition, resting at a hospital.

"Who the hell shoots at a deer in front of a house?"

That's the question one man and probably a lot of other neighbors have after bullet holes were found in a car window and the drywall of a home in the bedroom community north of Detroit.

Allegedly, an officer was called to a street to euthanize an injured deer. Grainy surveillance footage shows the officer attempted to euthanize it with his gun. The city's director of public safety said four shots were fired to put down the animal.

Residents in Oak Park awake to gunfire and look outside to see a police officer shooting a deer at night.

The third bullet appears to have gone through the deer and into a resident's home. The last shot hit the antler and likely ricocheted, hitting a car in the same driveway.

The bullet going through the home went right above the resident's head while he was sleeping in his bedroom, right off of Ridgedale Street. The man says he plans to hire an attorney.

Prepare for another scorcher over the weekend, with temperatures climbing into the mid-90s on Saturday and Sunday. Friday's forecasted high is supposed to be 90 degrees.

Although we are waking up to some patchy fog this morning, expect lots of sunshine this afternoon with highs back in the upper 80s to near 90 degrees. Temperatures should jump into the 90s Saturday and Sunday with a chance for some showers and storms on Sunday.

A judge Thursday dismissed charges against four social workers who were accused of failing to protect an 8-year-old Antelope Valley boy whose mother and her boyfriend were convicted of his May 2013 torture death.

The case was featured in the Netflix documentary "The Trials of Gabriel Fernandez."

District Attorney Jackie Lacey announced in February that "state law is not on our side" in the case of Stefanie Rodriguez and Patricia Clement and their supervisors, Kevin Bom and Gregory Merritt, after a three-justice panel from California's 2nd District Court of Appeal ruled that Los Angeles Superior Court Judge George  G.Lomeli should have granted the defense's motion to dismiss the case.

The four were charged in March 2016 with one felony count each of child abuse and falsifying public records in connection with Gabriel Fernandez's death.