President-elect Joe Biden and Vice President-elect Kamala Harris kicked off inaugural events in Washington, D.C. on Tuesday with a lighting ceremony to honor the more than 400,000 Americans who have died during the coronavirus pandemic.

WASHINGTON - The somber event began Tuesday evening at the Lincoln Memorial Reflecting Pool, soon after Biden arrived to the nation’s capital. The president-elect will take the oath of office on Wednesday with a mix of in-person and virtual events planned to mark the occasion.

Cardinal Wilton Gregory opened the ceremony with a moment of prayer followed by remarks from Harris.

"We gather tonight, a nation in mourning," Harris said. "For many months, we have grieved by ourselves. Tonight, we grieve and begin healing together."

As she prepares to take her oath of office, Harris called for unity, saying, "Though we may be physically separated, we, the American people, are united in spirit."

"My abiding hope, my abiding prayer, is that we emerge from this ordeal with a new wisdom, to cherish simple moments, to imagine new possibilities, and to open our hearts just a little bit more to one another," Harris said.

President-elect Joe Biden and Vice President-elect Kamala Harris kicked off inaugural events in Washington, D.C. on Tuesday with a lighting ceremony to honor the more than 400,000 Americans who have died during the coronavirus pandemic.

Harris then welcomed Lori Marie Key, a front-line medical worker who caught the attention of millions of Americans last year when she sang "Amazing Grace" at the start of her shift to her exhausted colleagues.

The Presidential Inaugural Committee called the COVID-19 ceremony the "first-ever lighting around the Reflecting Pool to memorialize American lives lost." It also invited communities around the country to join Washington in lighting up buildings and ringing church bells at 5:30 p.m. in "a national moment of unity and remembrance."

Biden will take office against the backdrop of searing national division and a pandemic that has killed countless Americans and upended the economy.

Biden, who has set lofty goals for his first few months as president, said his top priority is congressional approval of a $1.9 trillion coronavirus plan to administer 100 million vaccines by his 100th day in office — while also providing $1,400 direct payments to Americans to stimulate the virus-hammered economy.

Last week, he outlined five stages of his program to get 100 million doses administered in that time frame, declaring, "I’m convinced we can get it done."

Part of that plan includes setting up mass vaccination sites supported by federal emergency management personnel, with schools, stadiums and other facilities used as distribution centers. Biden also pledged to deploy mobile clinics to get vaccines to "hard-to-reach communities," such as minority communities that have borne the brunt of the pandemic.

Biden says he'll use maximize the available supply of vaccines and materials needed to administer them using a Cold War-era law called the Defense Production Act to direct private manufacturing and ensure the pandemic is under enough control after his first 100 days in office for most public schools to reopen nationwide.

He committed to better communication with the states to avoid surprises about how many vaccine doses they can expect. His plan calls for the federal government to fully reimburse states that mobilize their National Guard to help distribute vaccines.

He also seconded the Trump's administration's call last week for states to start vaccinating more seniors, reaching those 65 and older as well as younger people with certain health problems. Until now states have been focused on inoculating health care workers, and some are starting to vaccinate people 75 and older. Relatively few are providing shots to people between 65 and 75.

Another carryover from the Trump administration plan: Biden said he intends to mobilize local pharmacies to administer vaccines.

President-elect Joe Biden said that administering 100 million shots in his first 100 days is only the beginning of his coronavirus plan in remarks on Jan. 15, 2021 in Wilmington, Delaware.

Biden and Harris plan to take their oaths of office outside the U.S. Capitol building, the same location where supporters of President Donald Trump seeking to stop Congress from certifying the election results stormed the building in a deadly siege just two weeks prior.

The inauguration events aim to capture the traditional grandeur of the historic ceremony while complying with COVID-19 protocols. 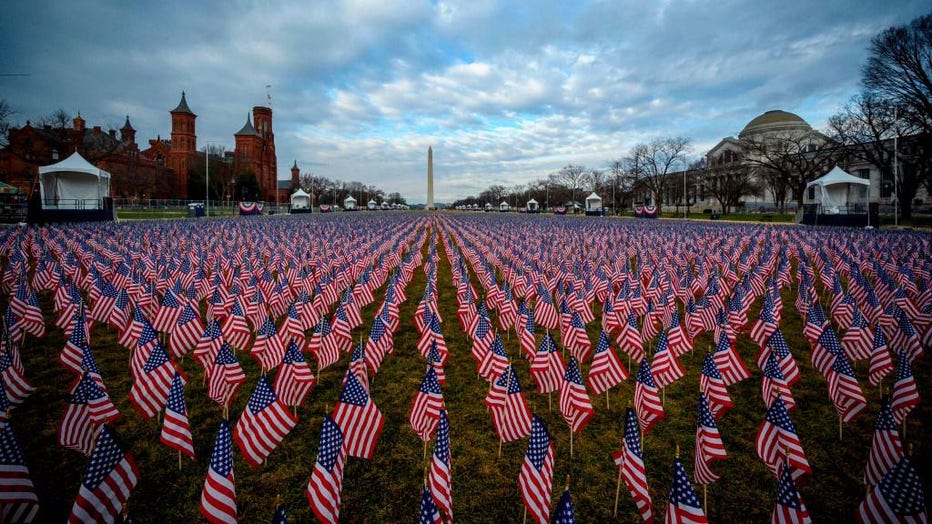 Thousands of flags creating a "field of flags" are seen on the National Mall ahead of Joe Biden's swearing-in inauguration ceremony as the 46th US president in Washington,DC on Jan. 18, 2021. (Photo by ERIC BARADAT/AFP via Getty Images)

Inaugural organizers on Monday installed some 200,000 small U.S., state and territorial flags on the National Mall to represent the American people who are unable to travel to Washington, D.C. In addition to the threat of the still-raging pandemic, people have been told to stay home due to the threat of continued violence from supporters of Trump.

RELATED: Inauguration Day 2021 will be like no other: What exactly is different?

Some events will still look similar to those of the past. During the inauguration ceremony, Jennifer Lopez and Garth Brooks will perform and Lady Gaga will sing the national anthem. Biden, according to the inauguration website, will give a speech to the nation, "laying out his vision to defeat the pandemic, build back better, and unify and heal the nation."

Afterwards, Biden and Harris will complete the traditional "Pass in Review" inspection of troops from all service branches, a ritual that symbolizes the peaceful transfer of power to a new Commander in Chief.

Biden, first lady Jill Biden, Harris and second gentlemen Douglas Emhoff will later visit Arlington National Cemetery to lay a wreath at the Tomb of the Unknown Soldier. They will be joined by former presidents and first ladies Barack and Michelle Obama, George W. and Laura Bush, and Bill and Hillary Clinton. Trump has said he will not be attending the inauguration events.

Instead of an in-person parade along Pennsylvania Avenue as held in year’s past, the inaugural committee has also planned a virtual "Parade Across America" after Biden is sworn-in.

On Wednesday evening, Tom Hanks will host a 90-minute prime time special with remarks from Biden and Harris and performances by Justin Timberlake, Jon Bon Jovi and Demi Lovato.

RELATED: What time is the inauguration? Answers to your questions about Inauguration Day 2021