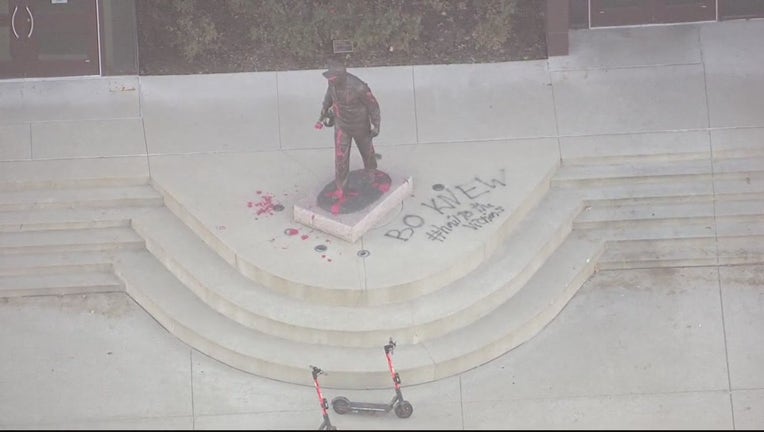 The Bo Schembechler statue outside of Schembechler Hall was vandalized on Nov. 24 with the words "Bo Knew" and "#HailToTheVictims"

ANN ARBOR, Mich. (FOX 2) - The Bo Schembechler statue at the University of Michigan has been vandalized with red spray paint and the words "Bo Knew", in reference to sexual abuse scandal at the university.

The vandalism was discovered Wednesday morning at the statue, which stands outside of Schembechler Hall on the University of Michigan campus. The statue had red or pink paint splattered on it.

At the foot of the statue were the words: "Bo Knew #HailToTheVictims."

"The story today is a statue," said Jon Vaughn. "When the frustration level kind of boils up people will act out."

Jon Vaughn was a running back at U-M from 1988 to 1990. He is also the spokesperson for more than 2000 survivors of alleged sexual abuse at the hands of the late team doctor, Dr. Robert Anderson.

"You can't hear a victim's struggle or experience in a three-minute one-sided statement at a board of regents meeting," he said.

Vaughn is on day 47 of a 100-day camp-out in front of the university president's house.  The University of Michigan is in court-ordered mediation with survivors which can't be discussed.

On the eve of the big Michigan/Ohio State game, there are more allegations of abuse at Ohio State. And Vaughn was joined by Rocky Ratliff, a former Buckeye wrestler.

The story Wednesday is a statue. The statue of Bo Shembechler was spraypainted with red paint with the phrase - hail to the victims. It was cleaned up later that same afternoon.

Ratliff attended Ohio State from 1995 to 1997. He says he is one of roughly 500 victims of sexual abuse by the late Ohio State team doctor, Dr. Richard Strauss.

"I am a sexual abuse survivor. I am an attorney that represented another 48 survivors, that 42 of them were dismissed myself and
41 others," he said.

A federal judge recently threw out a lawsuit brought by about 250 survivors at Ohio State.  The case is on appeal.

But back to the statue. U Of M said it will conduct a full investigation- and hold those responsible for the vandalism.

But that's the problem, Ratliff said.

"The fact that they would not issue such a statement to the sexual survivors it's just baffling to me," he said.

Former Michigan athletes have come forward over the past two years to discuss allegations of sexual abuse at the hands of team physician Dr. Robert Anderson.

In June of 2021, Schembechler's stepson, Matt Schembechler, said the legendary coach knew about the abuse but did nothing to stop it. Matt also said that he was a victim of Anderson's.

Dr. Anderson has been accused of abusing countless student-athletes at the University of Michigan over several decades.

First, he told his mom, a registered nurse who encouraged him to tell his father.

"When Bo got home, I told him what happened. He lost it," said Matt. He screamed. ‘I’m not hearing it.'"

A few days later, a different faction of the Schembechler family said in a statement that Bo did not know what was happening.

"It is telling to us that Bo never spoke to any of us about inappropriate behavior by Dr. Anderson," the statement reads. "To the contrary, in our steadfast opinion, Bo was not aware of such conduct and assumed that any procedures were medically appropriate. As he demonstrated at many points in his career and to us as a family, Bo had a clear and compelling sense of right and wrong: he would not have tolerated misconduct, especially toward any of his players, family members, coaches, or to anyone associated with the University of Michigan’s football program."