Last week Julia Wallace was hit by a vehicle and critically injured while walking to school. The driver, a 21-year-old, did stop at the scene. Police say drugs and alcohol are not a factor. It is unclear if he will face charges.

FOX 2 - It was anything but a typical night at Great Skate Thursday. All the money spent from skate rentals to raffle tickets, went to a Roseville Middle School student and her family.

Last week Julia Wallace was hit by a vehicle and critically injured while walking to school. The driver, a 21-year-old, did stop at the scene. Police say drugs and alcohol are not a factor. It is unclear if he will face charges.

"We just knew we had to do something to support this girl," said Stephanie White, Great Skate manager.

"One minute she was talking to us on a texting app," said her friend, Noah Mannino. "And I went back on, and then my friends were talking about how she was hit by a car."

It happened at the intersection of Martin Road and Barkman Street just yards away from the school.

"It’s really hard to cross over that street - sometimes I’ll just be at that corner for like minutes on end just waiting to pass," said her friend Jayden Elliott.

Julia’s friends came together tonight to skate and call for change.

"If they had crossing guards or anything this could have been prevented," said one of the teens.

With Julia Wallace's 13th birthday just days away, she remains hospitalized with a severe brain injury.

It’s a lot for her friends to process - and skating for a few hours helped them get their mind off everything. And, knowing they were helping the family financially, is comforting.

"I’m in a self-esteem group with her and stuff, and her and I are like really good friends," said Alexandria Defauw. "And I have multiple pictures on my phone of her. It's really sad, it's like really hard."

"She’s just a nice person, she’s a good friend - she cares about her friends so it’s sad to see her be hurt," said Noah.

Even though the people who work at Great Skate don’t know Julia, they felt compelled to do something. Others did too, donating gift baskets and prizes to be raffled off.

"It has been really devastating," said White. "I have children that go to the middle school, and just knowing that these parents are going through this, we needed to come together as a community." 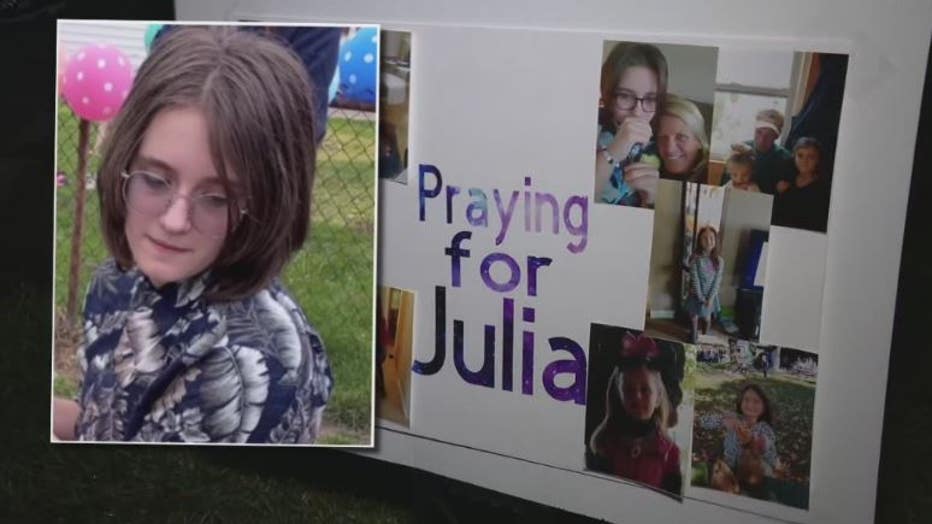