The hearing started at 2 p.m. with the Pledge of Allegiance, National Anthems, and invocations. Gov. Gretchen Whitmer then spoke, saying that Secretary of State Jocelyn Benson and Attorney General Dana Nessel both made sure the 2020 Election was fair and legal.

Then she said it was time for Michigan's electoral college voters to cast their votes in accordance with the public's vote in early November.

"Our American democracy was founded on the principle of majority rule," Whitmer said. "Michigan has chosen a clear winner for the office of President of the United States and for every elected office up and down the ballot."

"The people have spoken."

Following Whitmer, Lt. Gov. Garlin Gilchrist was selected chair and Michigan's 16 voters were then sworn in, including a replacement for one voter who was not in the hearing.

The Michigan Senate chamber where the vote was cast was closed to everyone due to "credible threats of violence" being tracked by police.

While protests in support of President Donald Trump were anticipated in Lansing, the Capitol Commission said it had deemed its actions necessary based on concerns that potential violence could ensue during Monday's vote. 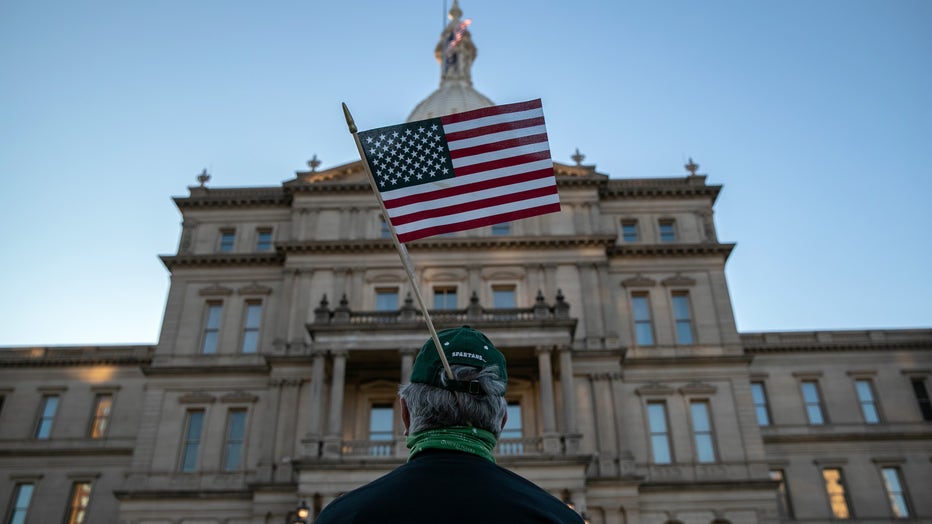 LANSING, MICHIGAN - NOVEMBER 04: Protesters attend a "Count On Us" rally at the Michigan State Capitol building on November 04, 2020 in Lansing, Michigan. People gathered to demand that all votes be counted in the 2020 election before any candidate d

If the 2020 election did anything for voters, it's educated them in every step required to run a national and complete a country-wide vote. With the vote certified in every county and the state, the safe-harbor deadline passed, Michigan's 16 presidential electors are scheduled to meet Dec. 14 in the Senate chamber to cast votes for Biden and Vice Presidential-elect Kamala Harris.

But a spokeswoman for Senate Majority Leader Mike Shirkey said that "based upon recommendations from law enforcement," government buildings like the Capitol building, the Binsfeld Office Building, and the Senate offices within Boji Tower will be closed.

The Capitol Commission is the only governing body with the authority to close the building.

The only people permitted to enter the building will be those chosen to cast the state's electoral college votes.

It's the latest evolution in what's been an increasingly-tense post-election brouhaha unlike any seen in the country's modern era.

RELATED: Wondering how exactly does the electoral college vote? Read up here

Supporters of the president have made themselves known in several states since the election, where they believe claims of voter fraud rigged the election against Trump. On Sunday, several thousand protested in Washington D.C.

To date, no allegations have been proven true, despite several efforts including calls for the Michigan legislature to appoint its own slate of electors loyal to the president.

The culmination of these efforts to overturn the election received one of their most definitive rebukes last Friday when the U.S. Supreme Court declined to hear arguments from a lawsuit filed by the Texas Attorney General seeking to overturn the results in Michigan, Georgia, Pennsylvania, and Wisconsin.

Nineteen Republican lawmakers representing Michigan in Congress and the legislature supported the lawsuit.

After Michigan's electoral voters cast their ballot, the buck will move to Congress to officially count those results in January.

“The meeting of the Electoral College should be a celebration of our democracy, but instead has now become a target for threats, intimidation, and violence," read a statement from Michigan House Democratic Leader-Elect Donna Lasinski. "It is a sad fact that the shameful actions by certain Republicans to smear our democratic institutions and deny the clear will of the voters has undeniably created this dangerous, hostile atmosphere."

Threats of Lansing-based violence have occurred earlier this year after several men plotted to kidnap the governor with backup plans of storming the capitol building.