DETROIT - One man is dead after being shot by Detroit police following a collision with undercover officers during a drag racing scene on the city's east side Monday morning.

Suspects in a stolen blue Dodge Charger had been doing donuts where several hundred people had gathered around 12:30 a.m. when one of them crashed into an unmarked police vehicle, police said.

Detroit Police Chief James White gave more details about the shooting during a press update on Monday in Detroit.

Detroit Police said the officers were in the area to do surveillance, which they say is a popular spot for street racing and drifting. There were roughly 200 cars in the area when the undercover officers called for backup. First Assistant Chief Todd Bettison said when those officers arrived, the scene turned chaotic.

"The marked patrol vehicles started to arrive with lights and sirens as a result, the vehicles that were doing donuts started to flee and scatter in all different directions," Bettison said.

He said it was just before midnight when the stolen Charger from Dearborn crashed into the undercover unit. According to police, one of the passengers in the Charger got out of the car and pointed a gun at the police. The officers said they were in fear for their lives and at least one shot was fired, killing the suspect.

"Our officer was fearing for his life after just being rammed. The officer exiting with that weapon fired approximately 3-4 shots," said Bettison.

Three other people in the Charger ran from the area and were able to get away from police, despite a helicopter hovering overhead and investigators on the ground.

"It's just tragic that bad decisions - this kind of activity - could have caused the life of our officers to be taken," said Bettison. "It ultimately resulted in a young man losing his life."

By 5:15 a.m., the scene had been cleared.  There were still several tire marks where the drivers had been doing burnouts.

Detroit police have initiated harsher penalties and ramped up resources like extra manpower and overtime shifts to curb illegal street racing. They've even gotten the help of aerial units from Michigan State Police.

RELATED: MSP take to the skies to arrest street racers

Detroit Police are asking anyone with information to come forward. 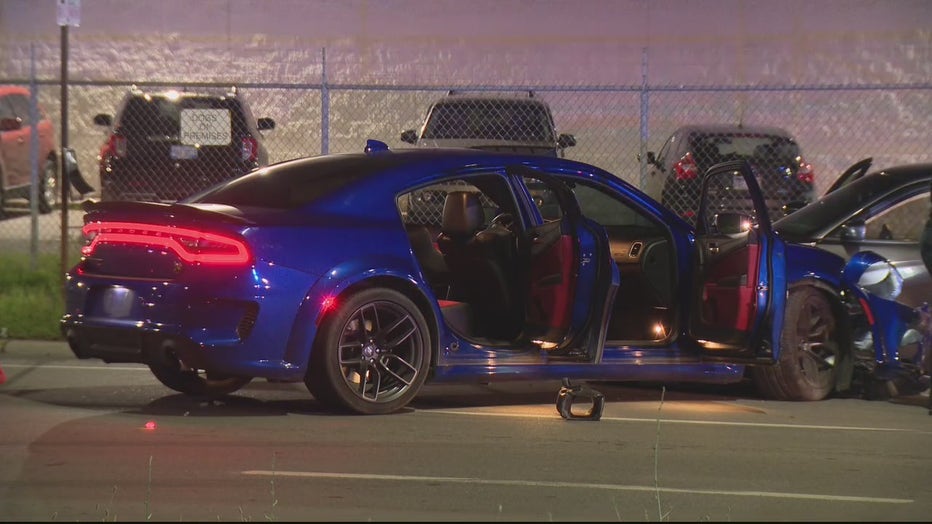