Otis Funches Jr. is charged with assault with intent to do great bodily harm, interfering with a crime report and domestic violence for allegedly choking out his girlfriend, who’s also a Detroit police officer, in the city of Taylor back in August.

TAYLOR, Mich. (FOX 2) - A Detroit cop appears headed to trial accused of roughing up his girlfriend.

Otis Funches Jr. is charged with assault with intent to do great bodily harm, interfering with a crime report and domestic violence for allegedly choking out his girlfriend, who’s also a Detroit police officer, in the city of Taylor back in August.

Officer Funches was in court earlier on Monday, where the judge ruled there was enough evidence to move forward with the case. He was given a $10,000 personal bond.

"When we looked into the facts and circumstances we found some troubling information," said Detroit Police Chief James White.

White says he moved quiickly to suspend Funches without pay.

"I’ve said it many times, it’s a privilege to wear this badge," the chief said. "It’s not a right, and to participate in that privilege you have to conduct yourself.

"We’re held to a higher standard, and the actions that I saw and the investigation that I read, is that he did not meet our departmental standards, and he was not acting appropriately."

Chief White also confirmed a former officer is being investigated for allegedly stealing thousands of dollars from a bond kiosk at the Detroit Detention Center.

The theft happened back in mid-January. Authorities realized what they were light after conducting an audit in August.

"We notified Internal Affairs Professional Standards, they opened up an investigation, and in a couple of weeks we had enough where we knew a gross policy violation had occurred," White said.

That officer was suspended without pay but resigned before facing a disciplinary hearing.

DPD is pursuing criminal charges against him and that’s not all.

"There are some things I can do to ensure they won’t be back through the department," White said. "And there’s notifications I can make to ensure they don’t get jobs at other law enforcement agencies, and I have a responsibility to do that. And I take that responsibility very seriously, so I will be doing that." 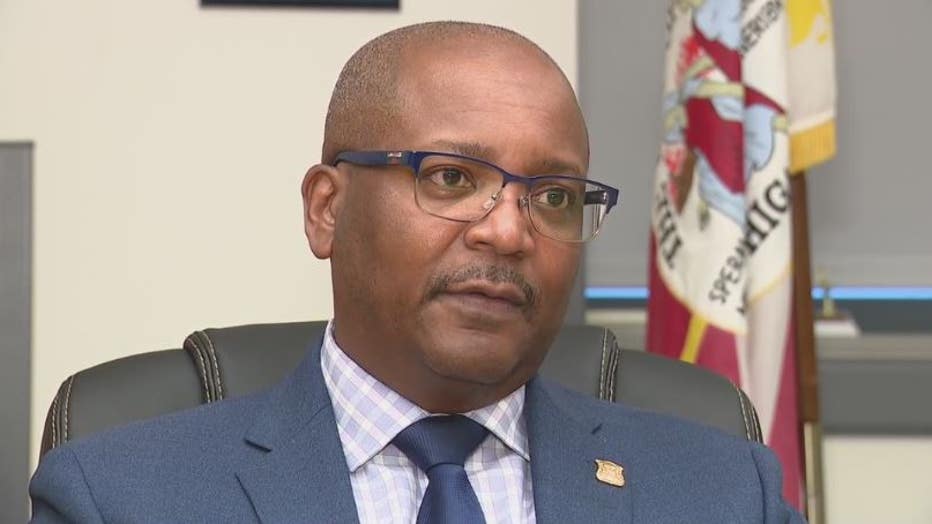 White says as jarring as the allegations are, they’re not representative of the department.

"People who have shot our officers and our officers have returned fire, striking them, and then immediately going into life-saving mode and saving the person, who just shot one of our officers.

"The overwhelming majority of the men and women in this department do a fine job and they don’t want bad officers giving them, putting us in a bad light either."