Several officers assaulted, many were arrested, and 13 weapons were confiscated after police try and break up the Greektown Casino fight.

A video posted on social media showed a chaotic scene as police tried to break up a fight involving dozens of people.

The violence from Saturday and previous weekends at the popular downtown area make business owners nervous about attracting more customers when fights and shootings take place.

Danny Preston, who has worked as an event consultant with bar owners for years is exhausted by the scenes.

"I see it through the windows and watch it with the owners and it makes an unsafe environment for the patrons that come to patronize the business so I just don't understand it," Preston said. "I don't know what the answer is necessarily."

Last month, another incident drew a heavy police presence when a double shooting took place in the parking lot of an area restaurant.

In this particular case, the fight was between two large groups around midnight Saturday at the corner of Beaubien and Monroe.

Detroit police, vastly outnumbered in the fight can be seen wrestling with several people. Some officers who were spotted handcuffing suspects in the video were still being swarmed by other people.

The minute-long clip also showed officers desperately trying to establish some kind of perimeter as they worked to get the scene under control.

Detroit police released the details of a preliminary investigation that noted officers were attempting to break up an ongoing fight escalating "between separate large groups of citizens, who then began to assault the officers."

"At this time, the DPD can only confirm that individuals from that group were taken into custody and that members of the DPD were injured during the altercation," read the release.

In total, 13 firearms were also confiscated during the brawl.

By Sunday afternoon, it was all quiet in the area. There were a lot of people wandering the area, but there was also a notable increase in police presence. 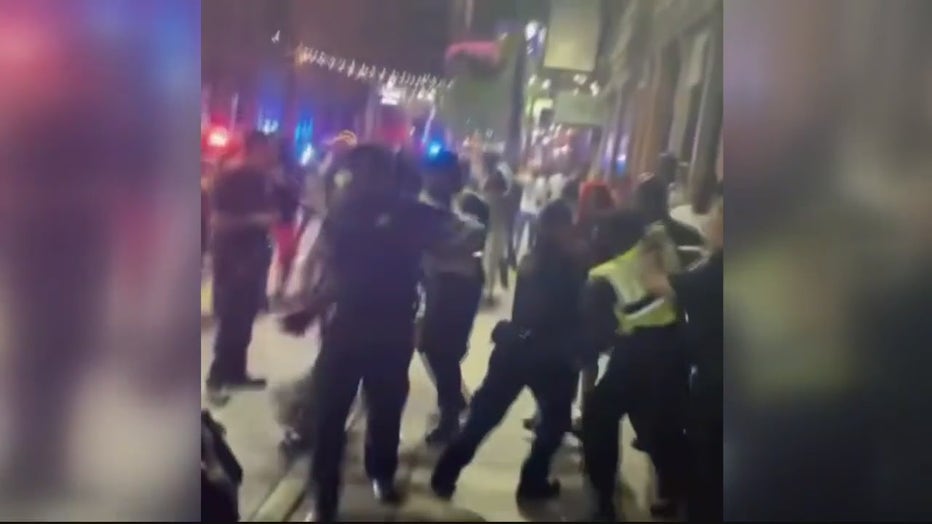 "There is just so many people enjoying this downtown, Greektown, having a great time," said Jeannette Pierce, who lives in Detroit. "There's great places like Golden Fleece and Exodus that have special Sunday time parties."

Preston said the goal of police should be to minimize violence.

Detroit police also said they will be meeting with business owners to ensure they comply with noise, capacity, and other operational requirements. They also plan to evaluate traffic plans to ensure a safe downtown venue for the city.