Detroit Police James Craig said on Monday that he's going to retire from the department on June 1 and says, while he's considered running for office he has not yet made a decision.

News of Craig's retirement leaked Friday night when sources told FOX 2 first that Craig would retire with eyes on a state-wide office, reportedly governor, according to FOX 2 sources.

Craig said on Monday that he is retiring voluntarily and is not being forced out of the role.

"I'm…convinced as I transition out, this department will be in great hands. Not just good hands, great hands," Craig said.

Detroit Mayor Mike Duggan thanked Craig for his service over the past 8 years and says he brought stability to the department which had seen five police chiefs in five years prior to his hiring in 2013.

"We'll see if we can't get another outstanding police chief," Duggan said.

The city council and board will provide Duggan with a list of possible police chiefs and Duggan will select one of the finalists.

Craig is reportedly considering a run for Governor of Michigan but is not expected to announce his intentions for running for office for at least another week or two.

Could Craig, who many believe would run as a Republican, gain support in the largely Democratic city of Detroit where conservatives often poll poorly? Would a police chief be able to garner support among those skeptical of law enforcement? How might a conservative base respond to someone who has spent years in Detroit?

Craig said that he is a Republican but said that doesn't change the way he runs the police department.

"Yes, I am a Republican," Craig said. "As a police chief, I serve everyone. I think that's important to say."

Craig said he has not made the decision about seeking office but said he would not rule it out.

Craig said after he retires, in the "weeks following" he would make a statement.

If he does elect to run, he would be competing against one of Duggan's closest allies. The Democratic mayor said Gov. Gretchen Whitmer is "one of the best partners of the city of Detroit in decades" and that he would continue to support her.

He said this would be a point where he and Craig disagree.

Craig was asked about unfounded allegations of the 2020 Election being stolen but he said he would not make any statements regarding politics on Monday.

The Chief's decision has added a new dimension to statewide politics. Republicans hadn't secured a candidate they believed could challenge incumbent Gretchen Whitmer in next year's gubernatorial race.

But as Politico reported this weekend, Craig had met with several leaders of the Michigan Republican Party recently, including Chair Ron Weiser. That could indicate a large field of potential support could be waiting for Craig if he were to run.

Before taking the Detroit job, Craig was Cincinnati’s chief starting in 2011 after being hired in 2009 to lead the Portland, Maine, police department. Craig served 28 years in Los Angeles after starting his police career as an officer in Detroit in 1977.

Craig, 64, has railed against the numbers of illegal guns on Detroit streets while being an outspoken proponent of the Second Amendment. Following a number of justifiable shootings or those done in self-defense, Craig said in 2014 that Detroit residents had the right to arm themselves as a form of protection.

"Detroiters are fed up," he said at the time. "They’re fed up with violence. I’m not encouraging violence, and in fact, I’m about the business of identifying those violent perpetrators that carry illegal guns."

He also has pushed back against rhetoric calling for cities to defund police departments following last May’s death of George Floyd in Minneapolis. Detroit was an exception to the violent protests around the U.S. a year ago after Floyd’s death, but the city was sued by activists who said officers used excessive force to keep protesters in line. 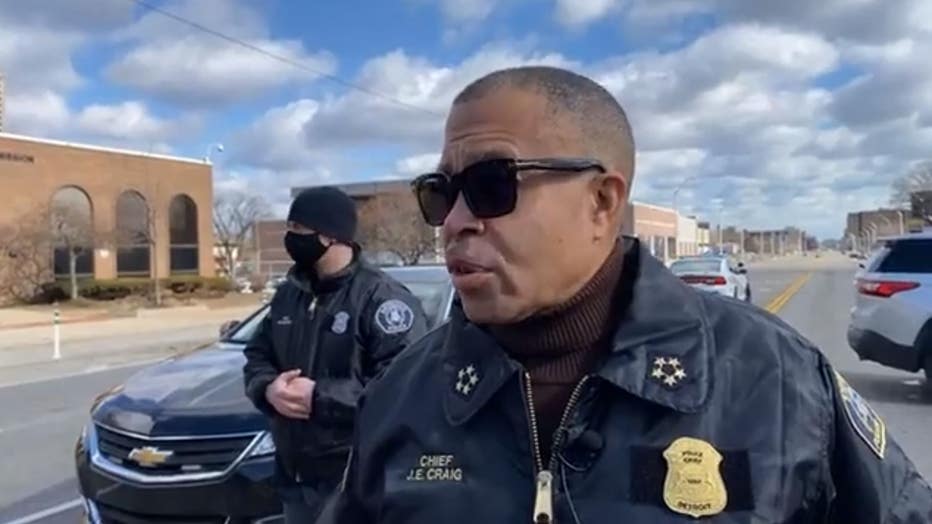