After 15 years, Terance Calhoun has been exonerated for crimes he did not commit.

DETROIT (FOX 2) - More than 15 years ago, Terance Calhoun was arrested, charged, convicted, and sentenced on two rape crimes. In 2007, a few months after he was convicted, he was ruled out by DNA but that was never provided to him. It would take 12 years for that to finally come to light to his attorneys and another three years before he was officially exonerated.

Calhoun pleaded no contest to kidnapping and sex crimes in 2007 of two victims. But in court on Wednesday, when he was officially exonerated and the charges against him were vacated, it was revealed that his DNA didn't match semen found at one crime scene and he also didn't match a description provided by the first victim. Additionally, the DNA evidence was directly linked to someone who has been convicted on other sexual assaults in Wayne County.

Valerie Newman, the head of the Wayne County Conviction Integrity Unit, reviewed all of that information on Wednesday and chastised the officer who tried to provide evidence - which was already in the court's hands - during a hearing last week. Newman held up a packet of evidence that was presented to the judge and said it wasn't anything that hadn't seen or reviewed before.

Judge Kelly Ramsey said it was necessary to do due diligence before signing the order to release Calhoun.

She says a Detroit police officer came to her that morning with a binder full of what he described as evidence. The content was a manila envelope that included Calhoun's name, the officer involved, and the victim. Inside of the envelope is the original police file from the second victim's case. 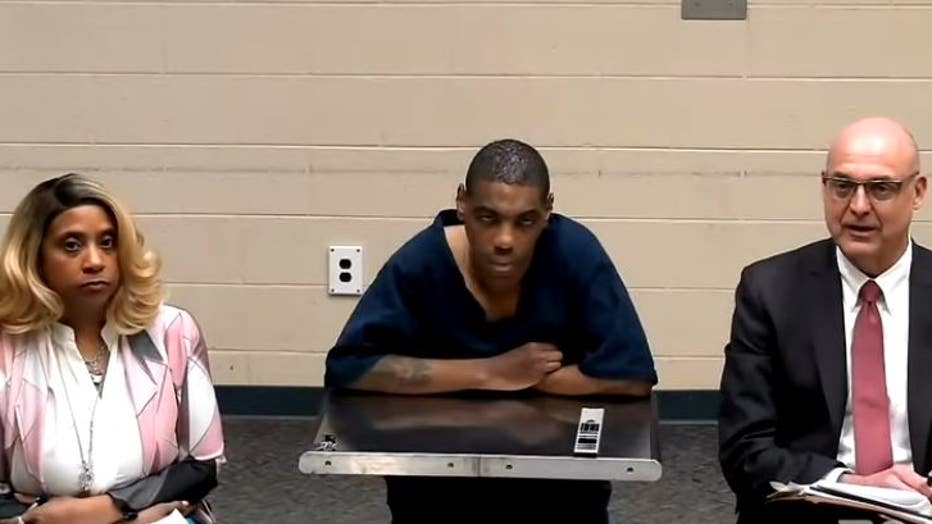 Terance Calhoun was convicted of sexual assault in 2007 but was excluded by his DNA that same year. It would be 15 years before the charges were officially dropped.

The Wayne County Prosecutor's Office had thoroughly already revealed this evidence and compared it to the police file. Newman said this was all identical to what was already on the record.

Outside the prison, one of Calhoun’s former cellmates came to greet him with a shirt proclaiming his innocence.

"He always said, ‘I didn’t do it.’ It’s a blessing to see him get exonerated for a crime he didn’t do," said Doug Little, a former prisoner.

The two rapes happened in 2006 less than half of a mile away from each other. The first victim described the suspect as a man with braids and a puzzle tattoo. Newman stated that Calhoun had neither of these.

In the second sexual assault, a used condom was recovered at the scene and DNA analysis was submitted.

Based on a composite sketch from the second victim, Calhoun was arrested and charged.

In February 2007, Calhoun was ruled competent to stand trial but it was noted that he had cognitive deficiencies. A few days later, he pleaded no contest to both charges and, on March 28, 2007, Calhoun was sentenced to 15-30 years in prison.

On June 15, 2007, analysis completed on the condom from the second sexual excluded Calhoun. On Sept. 10, 2007, Calhoun dismissed his appeal and Newman said the evidence clearing him was never provided to Calhoun or his defense team.

"There is no indication that the result of the…analysis completed on June 15, 2007, were provided to Mr. Calhoun's appellate counsel," Newman said.

By January 2019, an assistant prosecutor reviewed Calhoun's case and then notified the appellate office of Calhoun being excluded. A few weeks later, an attorney was appointed to Calhoun and another analysis was conducted on the evidence from the second sexual assault.

This second test confirmed the original report that Calhoun's DNA did not match.

On January 10, 2022, a Michigan State Police report linked the DNA to another person who is charged with other sexual assault in the Detroit area that happened between 2007 and 2014.

"During the post-conviction investigation, the Wayne County Prosecutor's Office Conviction Integrity Unit conducted a national search of law enforcement databases. The search turned up only one individual with a puzzle tattoo on his arm. That individual is currently incarcerated in the Michigan Department of Corrections for sexual assault convictions,"

Newman said that, even though Calhoun was excluded by his DNA three months after his sentencing, it was not provided to the defense until 2019.

Judge Ramsey granted the motion to vacate all charges and sentencing and ordered Calhoun be released from custody. She also granted immediate destruction of Calhoun's biological data and arrest records.

Calhoun did not speak during Wednesday's appearance.

During Calhoun’s release, he was met by a new family: A brotherhood called the Organization of Exonorees — other wrongfully convicted men from Michigan who help each other adjust to life on the outside.

Calhoun’s attorney said Terance requested Arby’s as his first meal out of prison. He plans to move to Tennessee with his family.