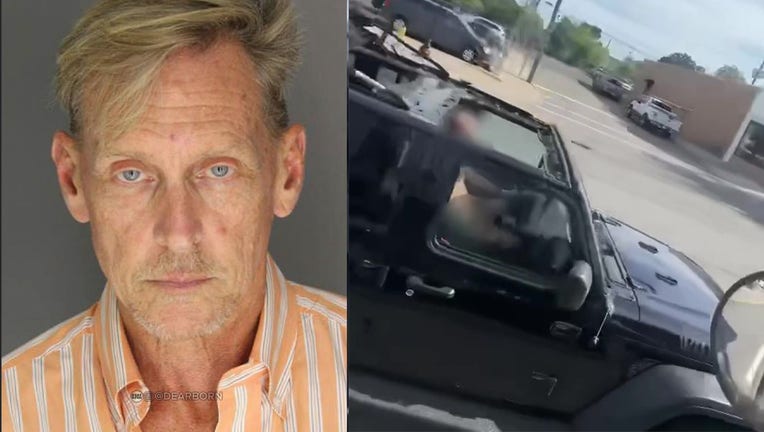 Michael Tew, 62, was arrested after police said he was driving naked and touching himself through Dearborn last Friday.

DEARBORN, Mich. (FOX 2) - An Eastern Michigan University administrator was charged with indecent exposure after police said he was arrested while driving his Jeep Wrangler through the city of Dearborn naked and touching himself.

Tew worked as an associate provost and Associate Vice President for Academic Programs and Services and also previously served as Director of Equality, FOX 2 has learned.

After police received the cell phone video, they identified Tew as the driver and arrested him at his Dearborn home on Wednesday.

An Eastern Michigan University professor was arrested after he was caught driving in his Jeep completely naked - while touching himself. Credit: TCD Dearborn News

"This sort of conduct is illegal and will not be tolerated in Dearborn. I’d like to commend the concerned citizen for documenting the incident and bringing it to our attention," said Dearborn Police Chief Issa Shahin,

In a statement from EMU, the university confirmed Tew had worked for the school since 1989 and said Tew has been suspended.

"We are troubled and concerned about the reported incident. The individual involved has been a faculty member and administrator at the University since 1989. Upon learning about this matter from Dearborn Police yesterday, the University took immediate action and suspended the individual indefinitely, pending the outcome of the investigation and legal proceedings. They are not permitted to be on campus during the suspension. We are not aware of any inappropriate conduct or actions of this nature related to their work on campus," the statement read.

This is not the first time Tew has been charged with indecent exposure. In September 2012, he was accused of the same crime in Livonia but those charges were ultimately dismissed by the prosecution.

No reason was given.