DETROIT - Every adult in Michigan is now eligible to schedule a coronavirus vaccine appointment after several months of a steadily growing supply of doses becoming more available.

The state's latest eligibility benchmark couldn't have come any sooner as Michigan's infection rate has continued to skyrocket days after it was identified as having the biggest increase in new cases.

Michigan's leaders have said they don't plan on enacting more restrictions on businesses or schools. Instead, the state has opted to ramp up vaccines in an effort to boost immunity. So far, it's been successful among the groups that have been eligible for treatment.

But the focus has turned toward younger populations that until Monday weren't eligible for a vaccine. Hospitalizations among people in their 20s and 30s and 40s are taking up a larger share of beds dedicated to those with COVID-19.

And on Saturday, Michigan reported some of its highest daily cases every, providing no reason to think the surge will slow down anytime soon.

Every adult now eligible for a vaccine

Every Michigan adult and teenager age 16 and up is now eligible for a vaccine. For much of March, it was adults 50 and older and anyone with health issues that could schedule a vaccine.

But April 5 has been circled on people's calendars for weeks since the state announced today would be when anyone could schedule a shot. Months of a supply squeeze have put pressure on protecting Michigan's most vulnerable and those in occupations with more potential for getting infected.

It started with health care employees and nursing home residents. Then age restrictions were slowly lowered and more job-based requirements were added. 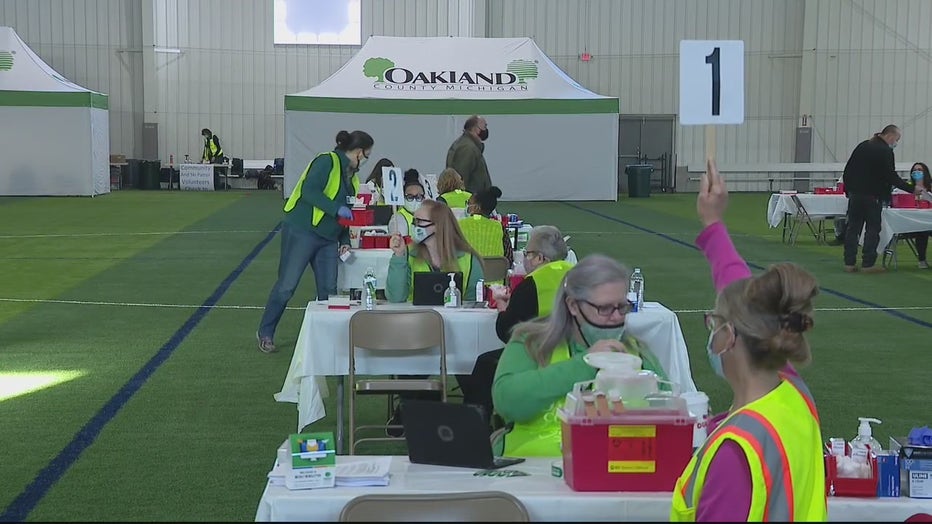 The timing of Michigan's vaccine eligibility expansion arrives as the state reports some of its highest daily case totals ever.

During the first quarter of the year, the state has also rolled out unprecedented public health infrastructure that makes use of some of its biggest facilities. Ford Field in Detroit and the UWM Sports Complex in Pontiac have serviced much of Southeast Michigan, where vaccine rates have been inconsistent.

With more supplies ramping up, Michigan expects to get its biggest shipment to date. That also includes tens of thousands of Johnson & Johnson single-dose vaccines, which have been tougher for people to get their hands on.

Anyone who hasn't already tried getting a vaccine scheduled at Ford Field can visit Meijer's website, which has registration links on the home page. You can learn more here.

So far, more than a fifth of the state is fully vaccinated and about 35% has gotten at least one shot.

As vaccines increase, so do infections

The timing of Michigan's vaccine eligibility expansion arrives as the state reports some of its highest daily case totals ever. On Saturday, it reported 8,413 new infections. Metrics haven't reached that high since the state was embroiled in its second surge last December.

But epidemiologists have warned that March's increase looked similar to November's. But the reasons why each increase occurred look a little different. While local transmission between family gatherings ahead of the holidays helped push the spike last year, the most recent increase is partly attributed to high school students passing the virus along and then bringing it home.

While the number of deaths hasn't followed yet, the number of hospitalizations has. An analysis by FOX 2 last week found younger adults were making up a larger share of patient visits to hospitals.

That's a problem for health care capacity. The positive test rate as of late last week was 17.62% - which is higher than at any point during the second surge. You have to go back to April of 2020 to see screenings resulting in more positive tests.

But it's also a sign that vaccines are working since those that are eligible are having an easier time dealing with the pandemic's more severe symptoms.

"Zero percent of the people in our hospitals right now have been vaccinated which tells you that vaccines works," said Gov. Gretchen Whitmer at the UWM Sports Complex last week.

Surveys have shown a large group of those that identify as Republican, mainly Republican men, have expressed skepticism about the vaccine's usefulness.

Here, FOX 2 is dispelling myths about the coronavirus vaccine:

That last point may raise some eyebrows due to COVID-19's arrival only in late 2019. But this isn't the first coronavirus. There have been many detected in the years before, of which researchers have also come up with suitable vaccines that offer protection.

"The methodologies were under development over decades prior to this pandemic," said Dr. Russell Faust, the medical director at the Oakland County Health Division. "These companies have bene working on vaccines, not for this coronavirus, for others. SARS, MERS, you remember those?"

Children and the vaccine

What remains to be seen is the safety and effectiveness of vaccinating children from COVID-19. There's a reason why the eligibility stops at age 16.

But kids in schools can get infected by the virus just like their parents, even if they don't have to deal with the severity of the symptoms like older individuals might.

But last week, Pfizer's vaccine announced preliminary data that showed their vaccine was 100% effective in protecting kids age 12-15 from the virus. Inoculating young people could be a significant step in making sure infections slow down in schools. The transmission among high school students has been connected to an increase in infections among young people.

Pfizer's trial of their vaccine, which was developed by BioNTech in Germany, looked at 2,260 participants across the U.S. There were 18 confirmed infections in the placebo group and none in the group that received vaccines.

Detroit's mayor has said as soon as a vaccine is approved for young kids, it will be rolled out to students in the city.

Johnson & Johnson has also begun its own vaccine trial for kids age 12-17. The study was initially designed to evaluate the safety, reactions and immune response of single-dose and two-dose regimens of the shot in "healthy adults aged 18 to 55 years, as well as adults aged 65 years and older." It now includes adolescents.

Where can I get a vaccine?

One of the easiest places to look is on Meijer's website. The pharmacy is scheduling appointments at Southeast Michigan's two mass vaccination sites in Pontiac and Detroit. Learn more here.

County health websites are also doing their own scheduling. Here is a list of available websites where residents can schedule a spot:

Hospitals are also doing their own signup. Here's different options to take advantage of: