DETROIT (FOX 2) - On Monday, April 5, the COVID-19 vaccines will officially be available to everyone in Michigan above the age of 16. As we inch closer to that day, the state is also seeing a third spike in COVID-19 cases that started in mid-to-late February.

Michigan's third wave of COVID-19 is threatening progress made over the winter months after the state instituted a pause in mid-November.

State leaders are urging people to remain vigilant, even if they're vaccinated, and to continue wearing masks, using hand sanitizer, and maintaining social distance. According to the state, these efforts will likely remain in place until 70% of the state is vaccinated or has immunity.

The state of coronavirus in Michigan

On November 15, with the state's COVID-19 cases climbing and major winter holidays looming, Gov. Gretchen Whitmer called a Sunday evening news conference where she announced a three-week pause would be enacted to close indoor dining, high schools, casinos, and more - among other restrictions. The goal, similar to what happened in March 2020, was to allow our hospitals time to catch up and not be overwhelmed.

State officials feared a spike from Thanksgiving, Christmas, and other holidays, but a significant one never materialized and Michigan appeared to, once again, have a hold on cases as hospitalizations were significantly lower in February.

The pause and closures were slowly dialed back by the state over the winter months and indoor dining was eventually reopened in February.

In mid-February, Michigan's 7-day average was under 1,000 cases for about two weeks. But since then, the numbers have slowly climbed back up.

As the month of March comes to a close, the state's highest daily reported cases came on March 25 when 5,224 cases were reported. Michigan's 7-day average is 4,680, as of the most recent data on March 30.

This is still down from the December high of 7,270 but Michigan appears to be headed in the wrong direction for daily cases.

By far the largest demographic of cases to date, since the first case was confirmed in March 2020, is the age group 20-29, which accounts for almost 19% of all cases.

Deaths are a different story where people who are 80 or older account for 46% of all deaths. The next highest group is people in their 70s, who account for 27%.

Michigan's third surge of COVID-19 cases looks similar to the spike recorded last October. The rate of new cases increased with a familiar speed in March as it did during the state's second surge.

But there are a few things that are different about this new increase - among them are the groups being hospitalized and their vaccine status.

Currently, 74% of Michigan's hospital beds dedicated to COVID-19 patients are filled, about 2,301 in total as of March 30. About a third of those beds were filled during February's low period a little more than a month ago.

Much of that growth is "occurring among younger age groups," the Michigan Health and Hospital Association reported last week. The age group 30-39 has seen a 633% increase in hospitalizations, while hospitalizations for those in the 40-49 bracket have exploded by 800%.

But among adults 80 and older, hospitalizations only climbed 37%. That's despite elderly people having a tougher time weathering COVID-19's most severe symptoms.

Doctors say the disparity of these numbers is evidence that vaccines are working.

"The correlation between high vaccination rates and lower hospitalization growth rates shows the effectiveness of the COVID-19 vaccine and how it protects from the risk of severe disease or hospitalization," read a release from MHA. 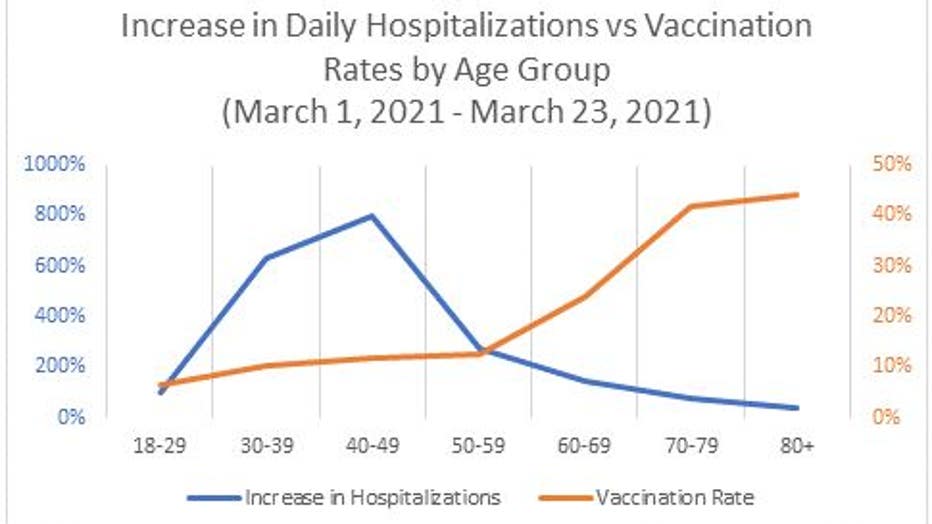 Data showing the increase in vaccination correlates with a decline in hospitalizations among those that are eligible for a shot. (Michigan Health and Hospitalization Association)

Visits to hospitals related to the coronavirus are also nearing peak numbers last measured in mid-November, before the number of patients in critical care and on ventilators reached its peak of the fall surge.

More than 100 people were dying a day at that time.

Evidence that vaccines are working

The grim trends coming out of Michigan hospitals do offer a silver lining, doctors say. The vaccines are working.

"We know that these vaccines are working, and the reason is that the group being vaccinated now has a decrease in the number of positivity rates," he added.

Every one of Henry Ford Health System's hospitals has reached bed occupancy 67% or more. At their Macomb branch, bed occupancy is at 96%.

Almost half of the 80 and older age group has gotten vaccinated, which health experts say is encouraging, even among Michigan's spike in cases.

In Detroit, positive tests climbed from 3 to 10% in less than a month. The number of residents that have been hospitalized jumped 164% in the last two weeks.

The alarming numbers prompted Mayor Mike Duggan to open eligibility for a vaccine to everyone over the age of 16 that lives or works in the city.

Read More: Detroit expands vaccine eligibility to residents 16+, those that work in city

That local sentiment was echoed among national reports that both the Pfizer and Moderna vaccines were 90% effective at preventing infections after the second shot under real-world conditions.

So far, Michigan has administered more than 4.12 million vaccine doses, covering 32.5% of the state. Its goal is to vaccinate 70% of the state by year's end.

While cases are spiking in the state, Whitmer said she doesn’t plan to tighten restrictions that she previously loosened.

Bars and restaurants were forced to close in mid-November after October’s case spike.

These establishments were allowed to reopen for indoor dining Feb. 1. They could operate at 25% capacity and had a curfew of 10 p.m.

Currently, bars and restaurants can operate at 50% capacity, up to 100 people, and have a curfew of 11 p.m.

As warmer weather nears, some eateries have begun moving outside to allow for increased social distancing and capacity.

Other protocols in place right now include allowing outdoor venues to have up to 20% capacity, and entertainment venues, such as bowling alleys and movie theaters, to operate at 50% capacity, up to 300 people.

That order is in place until April 19.

While Whitmer said she doesn’t intend to issue more restrictions, other entities, including schools and city governments, are making changes and issues orders.

Some schools have begun moving back to online instruction after outbreaks.

School officials say most of the outbreaks are connected to activities outside of the classroom, such as sports and students hanging out with friends.

On Tuesday, Detroit issued an emergency public health order that requires all government meetings that fall under the Open Meetings Act to be conducted virtually through at least the end of May.

No person will be allowed in rooms with patients that have pending or positive COVID-19 tests. Patients that haven't been exposed and don't have the virus can have one family member or friend visit at a time under specific guidelines.