LANSING, Mich. (FOX 2) - As inauguration day for President-elect Joe Biden approaches, and in the wake of last week's riot in the House of Representatives, state Capitols across the nation are on high alert. But Michigan Gov. Gretchen Whitmer said Wednesday there's no specific threat to the statehouse.

Given the severity of the attack on the U.S. Capitol Whitmer said she is deeply concerned about what might happen here but said there is not a credible threat of a repeat of last week's protest-turned-riot.

Gov. Whitmer says no credible threat of violence but law enforcement are preparing

Michigan Governor Gretchen Whitmer said Wednesday that there is not a credible threat of violence ahead of the inauguration of Joe Biden but also said that law enforcement is ready.

"I can say that there is a lot of chatter that is being monitored both by our federal partners and state resources and, as for specific threat, there is not any to my knowledge. But we can see nationally the focus is on the 17th and we're going to continue to stay close to our federal partners as we are thinking about how we ensure the safety of the capitol complex," he said.

Lansing Mayor Andy Schor asked Tuesday for the governor to bring in the National Guard for a planned demonstration at the state capitol on Sunday. Whitmer did not disclose the plans for Sunday but says they are ready.

"The Michigan State Police is leading our efforts and coordinating with the Michigan National Guard as well as the Ingham County Sheriff's Department, and the Lansing Police Department. I've got confidence in the work that we are doing, we take that seriously. It's not to say there is an impending threat but simply that we are prepared to respond to one, accordingly," said Whitmer. 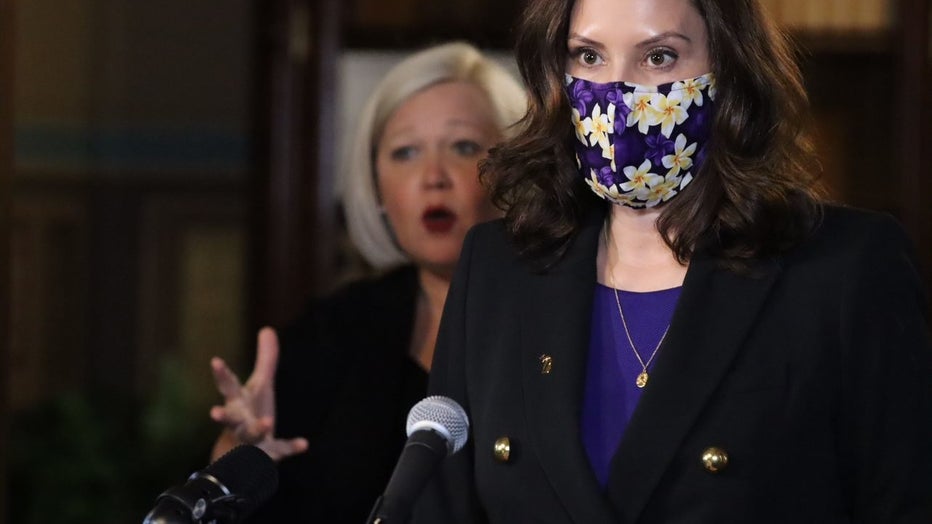 During her weekly update on COVID-19, Whitmer is taking some heat for delaying the partial reopening of in-person dining and drinking at Michigan restaurants. Senate GOP leader Mike Shirkey says the decision amounts to "government knows best" and it's "tone-deaf."

The governor says, while we have seen some major improvements, the state isn't quite ready

"As we are looking at the numbers, we see an uptick in positivity and in tests and that is a concern we all had might happen with the holidays," she said.

So far, the state has administered or scheduled 831,000 doses of the COVID-19 vaccine to Michigan residents. So far, the state is inoculating about 33,000 people each day but is shy of Whitmer's goal of 50,000 per day to vaccinate 5.6 million people.