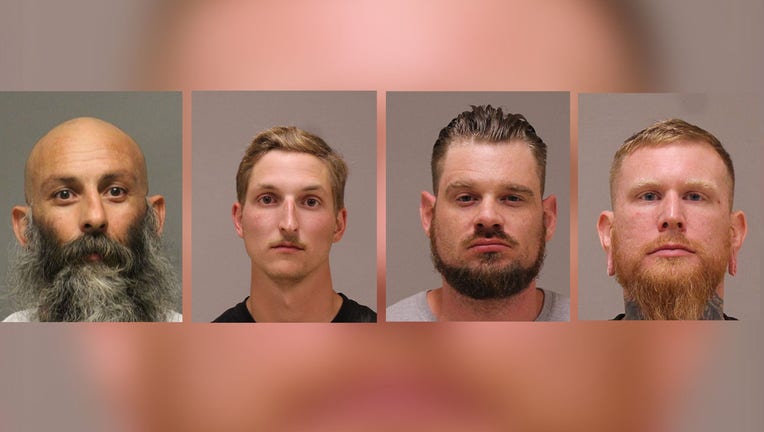 CHICAGO (AP) - Jurors are deliberating at the trial of four men accused of plotting to abduct Michigan Gov. Gretchen Whitmer in 2020. They began going through evidence on Monday after some four weeks of testimony in U.S. District Court in Grand Rapids, Michigan.

Here's a look at the charges and what's required to secure convictions:

The remaining defendants include Adam Fox, described by prosecutors as the plot's ringleader. He and co-defendant Barry Croft Jr. were affiliated with the "Three Percenter" far-right anti-government movement. Prosecutors say the other two defendants, Daniel Harris and Brandon Caserta, were members of the Wolverine Watchmen, a self-styled militia with similar views.

Ty Garbin pleaded guilty last year and Kaleb Franks joined him in February. Both were star government witnesses at trial.

What are the suspects charged with?

All four are charged with kidnapping conspiracy.

According to prosecutors, the defendants plotted from June to October 2020 to abduct Whitmer from her vacation home in northern Michigan because they were infuriated by what they saw as her overly restrictive policies during the pandemic.

Fox, Croft and Harris are also charged with conspiracy to use a weapon of mass destruction. Prosecutors said they sought to construct and buy explosives, with the aim of destroying a bridge near Whitmer's cottage to stymie police during the kidnapping.

Croft and Harris are charged with possession of an unregistered destructive device -- a firework wrapped with pennies that could serve as shrapnel.

Harris is the only one charged with possession of a semiautomatic assault rifle with a barrel less than 16 inches long that wasn't registered to him.

How much time could the suspects get?

The kidnapping conspiracy and conspiracy to use a weapon of mass destruction charges carry maximum life sentences.

The maximum sentence for possession of an unregistered destructive device is 10 years, and Harris could face up to three years in prison if convicted of the semiautomatic rifle charge.

Garbin has already been sentenced to six years in prison, and Franks is expected to receive a lighter sentence than if he had lost at trial.

What is required for the jury to convict the suspects?

The defendants never achieved their purported goal of kidnapping Whitmer. Unbeknownst to them, the FBI had infiltrated their group and was closely monitoring them. They were arrested in October 2020.

Defense attorneys portrayed their clients as weekend warriors prone to big, wild talk, who were often stoned. To prove it was deadly serious, prosecutors entered evidence showing the defendants took specific steps, referred to as "overt acts," toward implementing their plans.

Jury instructions explain that convictions on the kidnapping and weapons conspiracy charges require evidence that each defendant committed at least one of the long list of overt acts in the indictment.

What are the alleged overt acts?

They include that Fox proposed the kidnapping of Whitmer on Aug. 23, 2020, during a meeting with Harris and Caserta. Another is that the men scrutinized each other's IDs in a bid to ensure no one was an undercover agent.

Another is that Fox, Croft, Harris and Caserta held field-training exercises in September 2020, practicing tactics for fighting Whitmer's security detail.

The indictment attributes another overt act on Oct. 7, 2020, to Caserta, alleging he instructed co-conspirators that, if they encountered police, they should give the officers one chance to leave, then kill them.

Alleged overt acts on the weapons of mass destruction charge include that Harris boasted on May 1, 2020, that he was a Marine Corps veteran who "can make things go boom if you give me what I need."

What's the role of entrapment?

The defense mounted an entrapment defense at trial, accusing the FBI of engaging in the barred investigatory practice. Jurors who find authorities tricked or cajoled targets into committing crimes they showed no predisposition to commit are supposed to return with not guilty verdicts.

Prosecutors have the burden of proving defendants weren't entrapped. At trial, they sought to show  that not only were the men were predisposed to joining the kidnap plot but that they discussed such schemes before the FBI sting began.