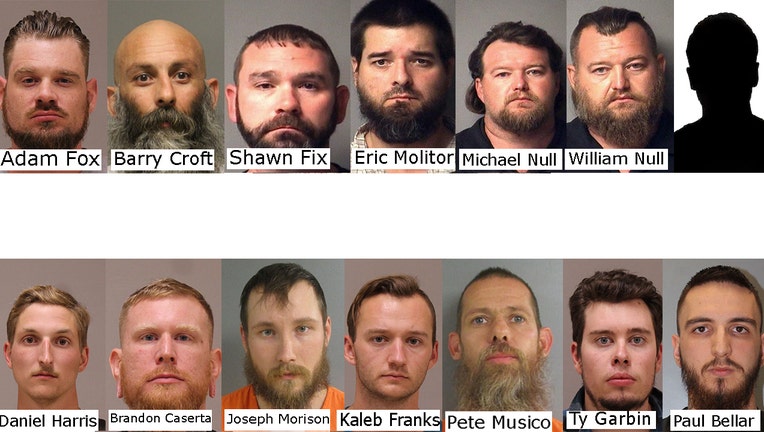 14 men are accused of plotting to kidnap Michigan Governor Gretchen Whitmer. The 14th person has not been identifed, as of Oct. 15, 2020

SOUTHFIELD, Mich. (FOX 2) - Michigan's attorney general's office is reporting another person has been charged in the plot to kidnap governor Gretchen Whitmer.

According to Attorney General Dana Nessel, 51-year-old Brian Higgins of Wisconsin Dells is charged with material support of an act of terrorism, a 20-year felony.

“While the political rhetoric in our nation may at times be divisive, I am encouraged by the united front our law enforcement community has displayed in response to this indescribable act of terror,” Nessel said. “These were very credible, and very serious threats to our elected officials and the public in general, and the swift actions taken by state and federal authorities this past week are nothing short of heroic.”

A total of 13 people were arrested last week.

During a hearing in a Grand Rapids federal court to review the evidence against the five Michigan defendants, Magistrate Judge Sally Berens ordered Kaleb Franks, Daniel Harris and Brandon Caserta to be held without bond until the trial.

She said she would rule at a later date on the bond status of the other two Michigan men, Adam Fox and Ty Garbin. A sixth defendant from Delaware, Barry Croft, was ordered Tuesday to be transferred to Michigan to face the charges.

Through a combination of sources in a Michigan militia group and undercover federal agents, authorities were tracking a group's plot all summer long to kidnap Whitmer and "try" her for "treason" before the upcoming election in November.

The group talked through encrypted chat rooms and met in Ohio, Wisconsin and even in a secret underground room in Grand Rapids. At these meetings, the FBI said the group participated in firearm trainings and tactical drills and also built IEDs. During one meeting the group even set one off one of the IED after surrounding it by human silhouette targets, the FBI said.

After months of theorizing, the group came up with a plan to blow up an overpass near Gov. Whitmer's vacation house to distract police and go kidnap her, the FBI said.

The group also made a plan with an undercover agent to buy bomb supplies for $4,000. An Oct. 7 meeting was scheduled to make the purchase on Oct. 7.

You can read more details from the case here.