James Craig, the former Detroit Police Chief, officially launched his campaign for governor on Tuesday by declaring his intentions on a mic while surrounded by Detroit Will Breathe protesters on Belle Isle. He then moved on to a more private venue where he gave his first official speech as a candidate.

DETROIT - James Craig's planned speech on Belle Isle where the former police chief was expected to announce his candidacy for governor was derailed after protesters gathered at the podium.

Craig had planned to announce his candidacy amid months of laying the groundwork for the race. But when he was scheduled to speak, dozens of people from Detroit Will Breathe crowded around the scene, chanting against him.

James Craig announces run for governor through mass of protesters

When James Craig retired from the Detroit Police Department as Chief in May, it was believed he was running for governor of Michigan as a Republican. On Tuesday, after months of not entirely saying it, he made it official - declaring for governor amid a crowd of protesters.

Craig still managed to make a short appearance in an effort to break through the noise, saying he was running for governor.

"I've got one thing to say, I'm running for governor," he shouted into the microphone over chants and air horns.

Then, followed by protesters, he walked back into his vehicle.

Craig and Detroit Will Breath have clashed in previous exchanges over Black Lives Matter protests in 2020 when demonstrators came to Detroit. While Craig took credit for keeping peace and relative quiet during the protests, the demonstrators argue he overlooked their demands and used excessive force during the clashes.

Some of that rhetoric was on display again Tuesday when chants denouncing Craig got louder as the morning continued. 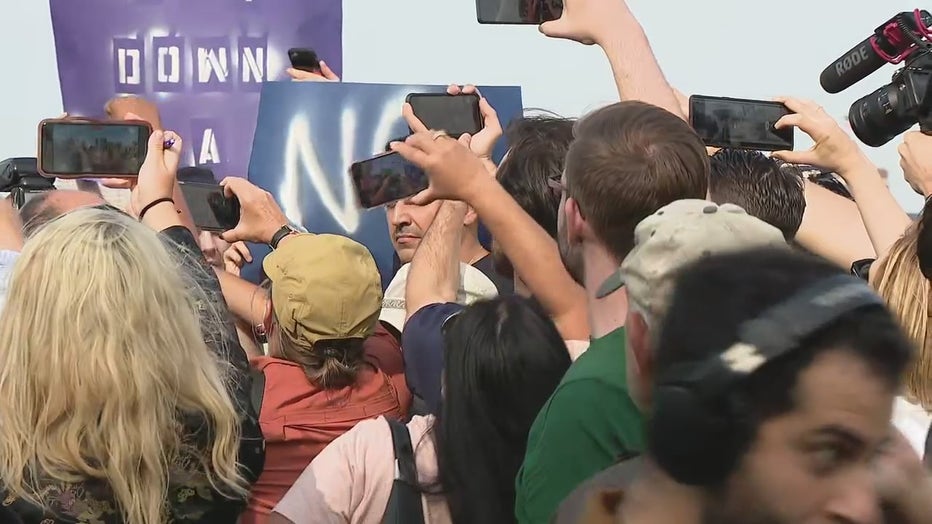 "Hey hey, ho ho, James Craig has got to go!" went some of the chants.

Shortly after the disruption, Craig told FOX 2 that the Department of Natural Resources was supposed to be at the location to be in charge of crowd control, but said they never arrived in time to complete their task.

However, a DNR spokesman said that's not their job and they only manage the park. He said it was misinformation to say otherwise.

Later on Tuesday in a text message FOX 2 obtained., a Craig campaign spokesperson said the DNR was not to blame.