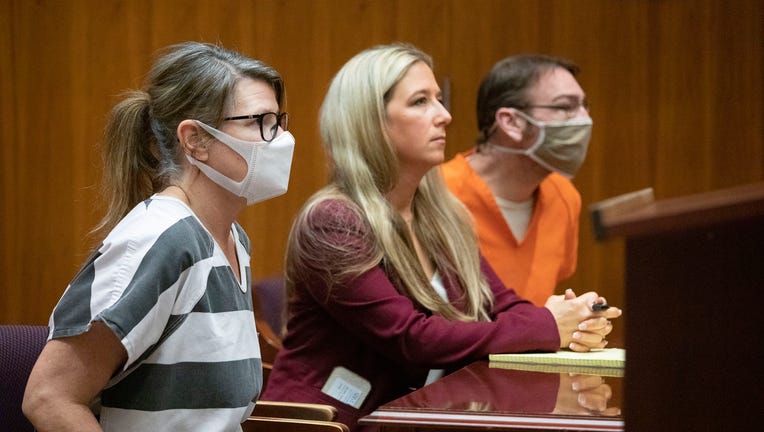 PONTIAC, MI - MARCH 22: Jennifer Crumbley (L) and her husband James Crumbley, parents of the alleged teen Oxford High School shooter Ethan Crumbley who is charged with killing four people and wounding seven others, appear in 6th Circuit Court for the

PONTIAC, MIch. (FOX 2) - The attorneys for James and Jennifer Crumbley are asking for the trial to be moved out of Oakland County, saying that the parents will not get a fair trial on the involuntary manslaughter charges connected to the Oxford High School shooting on Nov. 30.

Attorneys Shannon Smith and Mariell Lehman filed the motion to change venue Monday evening in Oakland County court and said that, due to the massive amount of publicity surrounding the case and hearings, the Crumbley parents cannot be guaranteed the right to a fair trial.

According to the motion, Oakland County Prosecutor Karen McDonald has granted dozens of interviews and given multiple press conferences since the day of the shooting. These interviews happened on local TV, including FOX 2, as well as national news outlets like CNN and NPR.

"The problem with the interviews and quotes is that Prosecutor McDonald has put out inaccurate and untrue information that has effectively destroyed the Crumbleys in the media," the motion reads.

The Crumbley attorneys say McDonald released information that she is stating as facts but has not been proven at trial. This has led the public ‘(adopt) her version as the truth’, which prevents James and Jennifer from getting a fair trial, the attorneys claim.

Generally, most criminal defendants are tried in the same county where the crime occurred. Their attorneys cite multiple infamous cases including Casey Anthony, Timothy McVeigh, and Rodney King trials. All three had different issues connected to venues and the jury pool.

In the Casey Anthony trial, jurors were bussed in for the trial and the judge had them moved to the trial location rather than moving the location. For a 38-day-long trial, it cost the country about $18,500, the attorneys say.

The Rodney King trial was moved from Los Angeles County to Simi Valley and cost $250,000.

As for the McVeigh case, the attorneys cite the similarities in this case as community members there were connected to the victims, as is the case in the Oxford shooting.

The impact of the Oxford High School mass shooting

The attorneys use the initial press release from McDonald as evidence of how widespread the victims are from the Oxford shooting. The release was sent out shortly after Ethan Crumbley was charged with terrorism and McDonald explained, in part, here:

"Its not a usual, typical, charge but when we sat down and talked about the charges that were applicable in this case, the children that I have just listed and those that were injured, they're the victims in the first-degree murder charges and the assault with intent to murder. But what about all these other children? What about all the children who ran, screaming, hiding under desks? What about all the children at home right now who can’t eat and can’t sleep and can’t imagine a world where they had ever step back, foot back in that school [sic]? Those are victims too, and so are their families and so is the community, and the charge of terrorism reflects that."

There are roughly 1,600 students, faculty, and staff at Oxford High School plus dozens of police departments and first responders who arrived at the scene and it leads to a wide web of people connected to the shooting, the attorneys say. Whenever there is a change to the case, that requires a notification sent to 1,800 people via email.

"There is no way that prospective jurors who witnessed portions of the events on November 30th, or that people who know first responders to the mass murder scene, or those who have donated to the families who lost loved ones, can set aside their bias and feelings about this case. It is simply too overwhelming," the attorneys said.

The attorneys also took issue with the term ‘Oxford Strong’, which was a sign of support for survivors and victims. Throughout Oakland County, signs and black ribbons lined the streets and the defense says the prosecution has attended court wearing the ribbons.

The defense team says that the ‘Oxford Strong’ message was more saturated in Oakland County than others, meaning there's no way that the Crumbley parents can get a fair trial.

"The defense does not offer this information as a criticism in any way; the aftermath of the school shooting showed the strength of the community and the undeniable support to the victims and their families," the motion reads.

Additionally, the motion cited millions of dollars raised through GoFundMe and funds offered from the Oxford Community Mental Health, which attorneys say shows how many people were impacted.

Already convicted in the court of public opinion

The defense attorneys argue that public sentiment has already convicted the parents. In the motion, the attorneys cite a FOX 2 stream of the Crumbleys in court on the same day, on January 7. Ethan's stream had over 234,000 views whiles James and Jennifer had more than 613,000 views.

According to the attorneys, this shows that the view of the Crumbley parents is ‘very unfavorable’ and they ‘been clearly convicted in the court of public opinion.’

Attorneys said they combed through comments on media publishing websites and found many that prove this point:

The Crumbley attorneys say the public has adapted the narrative from the prosecutor that is untrue and not based on any evidence.

The defense attorneys submitted memes of the Crumbley parents which were sent and shared around Christmas that prove that there is no support for the parents.

"Instead, many of the memes featured the Crumbleys’ booking photographs with Merry Christmas messages," the motion reads.

The defense attorneys say that there ‘seem to be no events' in the city that don't involve the shooting, which only causes more vitriol against the Crumbleys.

"Counsel does not suggest that the shooting should not be remembered; however, the consistent reminders and discussions about the case continue to fan the flames against the Crumbleys and continue to degrade their ability to have a fair and impartial jury," the attorneys wrote.

The day of the shooting, the Crumbley parents were told by law enforcement to leave their home. This was before they were charged and taken into custody. The defense calls this a ‘lynch mob mentality' and say it has continued throughout the proceedings.

The defense says they're still in protective custody in the Oakland County Jail.

McDonald's handling of the case

Similar to the motions filed last week, the defense attorneys argue that McDonald has given out too much information related to the case which has not been used or proven to be true in court.

Additionally, they cite McDonald's press conference on Dec. 3, when she stated that the gun used was stored unlocked in a drawer in the parents' bedroom. However, the dEfense dispute this claim and state that the gun was locked, unloaded, and stored separately from ammunition.

In a March interview with FOX 2, McDonald said she was 'haunted:

"Every single thing (haunts me). Every single thing. There wasn’t one thing that was less disturbing than the other," McDonald said. "It requires immersing yourself in a dark place (true) and that I think that is the real challenge."

The defense said this sentiment has a great impact on the public. They also used another quote from that story, where she said she'll hold the three Crumbleys' responsible:

"My only goal is to make sure that they know I am going to do everything possible to hold these three people accountable because their kids deserve that and I speak for my entire team. We never forget about the victims, never," she said.

The attorneys say this further inflames and taints the jury pool.

After last week's motions were filed, McDonald did issue a statement related to the motions or claims that she's tainting the jury pool. However, on Tuesday, she issued a statement that said her office would not be distracted.

"From the moment I learned about the Oxford shooting, my focus and attention has been on holding those responsible accountable, and on advocating for our victims. It is important for my office to be a transparent, reliable source of information to the public. My office will not be distracted by motions that are legally and factually deficient, and we will be filing appropriate written responses with the Court. Our trial team has never and will never mislead the court or the public. We intend to prove the allegations we’ve made against the Crumbleys beyond a reasonable doubt at trial," McDonald said.

These motions, like the ones filed last week, will be up to the judge to grant or deny. This is scheduled to be heard inf front of Judge Cheryl Matthews on June 27.