Man charged in Jan. 6 insurrection apologizes to officers after hearing

Following his testimony on Tuesday, Stephen Ayres went to several of the officers who were present during the insurrection at the hearing and apologized and even embraced a few.

A man who joined the pro-Trump mob that attacked the U.S. Capitol apologized Tuesday to officers who protected the building after telling lawmakers that he regrets being duped by the former president's lies of election fraud.

During a hearing before the U.S. House committee that's investigating the insurrection, Stephen Ayres testified that he felt called by former President Donald Trump to come to Washington on Jan. 6, 2021.

He described being swept up by Trump's bogus claims, and believing as he marched to the Capitol that Trump would join them there and that there was still a chance the election could be overturned. 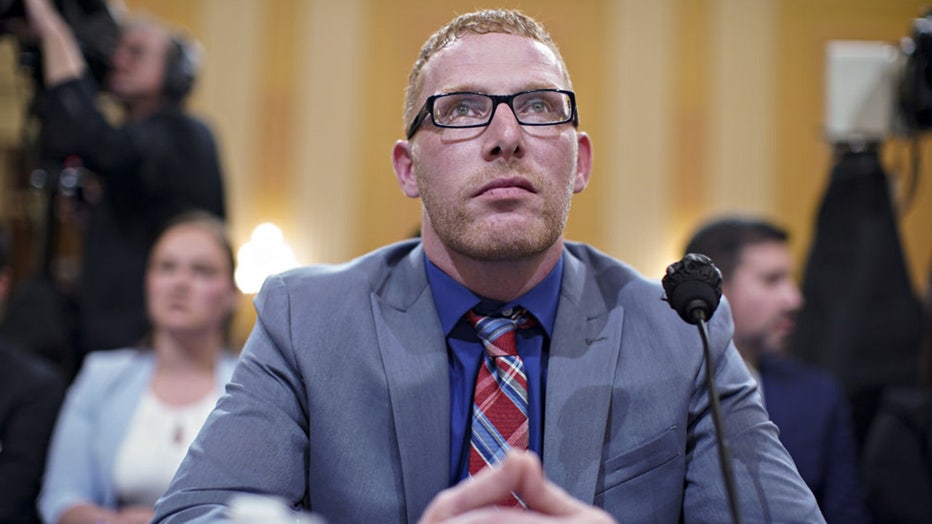 FILE - Stephen Ayres, a rioter who illegally entered the US Capitol on Jan. 6., during a hearing of the Select Committee to Investigate the January 6th Attack on the US Capitol in Washington, D.C., US, on Tuesday, July 12, 2022. (Al Drago/Bloomberg via Getty Images)

"I felt like I had like horse blinders on. I was locked in the whole time," said Ayres, who is scheduled to be sentenced in September after pleading guilty to a misdemeanor in the riot.

His message to others: "Take the blinders off, make sure you step back and see what’s going on before it’s too late."

Ayres, who was not accused of any violence or destruction on Jan. 6, said he worked for a cabinet company in northeast Ohio for 20 years, but lost his job and sold his home after the riot. He was joined by his wife at the hearing.

After the hearing, Ayres approached officers in the committee room who have testified about being verbally and physically attacked by the angry mob. Ayres apologized for his actions to Capitol Police Officers Aquilino Gonell and Harry Dunn, Metropolitan Police Officer Daniel Hodges and former MPD officer Michael Fanone.

The officers appeared to have different responses to Ayres’ attempt to make amends.

Fanone told The Associated Press that the apology was not necessary because "it doesn’t do s--- for me." Hodges said on CNN that he accepted the apology, adding that "you have to believe that there are people out there who can change."

Gonell, who recently found out that the injuries he succumbed to on Jan. 6 won’t allow him to be a part of the force any longer, said he accepted the sentiment from Ayres, but it doesn’t amount to much.

"He still has to answer for what he did legally. And to his God. So it’s up to him," the former sergeant said.

Officer Edwards continued her testimony and described the terrifying moments she was pepper-sprayed and tear-gased as rioters surged on the Capitol.

Dunn, who didn’t stand up when Ayres approached him, said he does not accept his apology.

The Jan. 6 House committee that's investigating the insurrection sought to use Ayres' testimony to show how Trump's Dec. 19, 2020, tweet calling his supporters to Washington mobilized not only far-right extremist groups, but average Americans to descend on the nation's capital.

Ayres described being a loyal follower of Trump on social media before Jan. 6 and said he felt he needed to heed the president’s call to come to Washington, D.C., for the "Stop the Steal" rally.

"I was very upset, as were most of his supporters," Ayres said when asked about Trump’s unfounded election claims. Asked by Rep. Liz Cheney if he still believes the election was stolen, Ayres said, "Not so much now."

Ayres said he wasn’t planning to storm the Capitol before Trump’s speech "got everybody riled up." He had believed the president would be joining them at the Capitol.

"Basically, we were just following what he said," Ayres said.

Ayres said he and friends who accompanied him to Washington decided to leave the Capitol when Trump sent a tweet asking rioters to leave. If Trump had done that earlier in the day, "maybe we wouldn't be in this bad of a situation," Ayres said.

Ayres said it makes him mad that Trump is still pushing his bogus claims about the election.

"I was hanging on every word he was saying," he said. "Everything he was putting out, I was following it."

His testimony echoed the words of many Capitol rioters who have expressed remorse for their crimes at sentencing hearings.

He's among about 840 people who have been charged with federal crimes related to the Jan. 6 riot. More than 330 of them have pleaded guilty, mostly to misdemeanor charges punishable by no more than one year in prison. More than 200 have been sentenced.

In his court case, Ayres admitted that he drove from Ohio to Washington on the eve of the "Stop the Steal" rally to protest Congress’ certification of the Electoral College vote count. He entered the Capitol through the Senate Wing doors and remained inside for about 10 minutes, joining other rioters in chanting.

In a Facebook post four days before the riot, Ayres attached an image of a poster that said "the president is calling on us to come back to Washington on January 6th for a big protest."

In another Facebook post before the riot, he wrote, "Mainstream media, social media, Democrat party, FISA courts, Chief Justice John Roberts, Joe Biden, Nancy Pelosi, etc....all have committed TREASON against a sitting U.S. president! !! All are now put on notice by ‘We The People!’"