LIVONIA, Mich. (FOX 2) - A handful of Livonia residents stood out front of city hall ahead of tonight's city council meeting hoping to save their trees.

Mass tree removal in Livonia by city has some resident furious

Street repairs in the city has put hundreds of Livonia trees on the chopping block.

"These trees are really what make the neighborhood, they give it the aesthetic. They are what people look for when they move to Livonia," said Brent Sabo, resident.

But street repairs in the city have put hundreds of trees on the chopping block.

"What the road work does to the root systems, the trees would be in danger of falling," said Kathleen McIntyre, council president. "And causing harm or damage to property - or even more significantly, to a person."

McIntrye says tree removal is nothing new and represents a small percentage.

Brent Sabo made it his mission to help spread the word about the removal of trees and try to put an end to it.

"These are mature trees that are irreplaceable," he said.

Sabo says on Monday as he prepared to protest the planned cutting down of hundreds of trees, the very tree in front of his house was in fact cut down.

"There was actually just a stump left of our tree," he said. "Our entire front lawn was littered with branches, there was a tree removal truck blocking our driveway."

The city says they are replacing more trees than they plan to remove.

"We are planting 400 to 500 trees a year, but they are little stick trees and I've driven around and many of them are dead, " said one resident

And even though this protest will not stop a process already in motion, the effort is being noticed by decision-makers.

"Communicating with us helps change things going forward," McIntyre said. "Now we have a Livonia tree ordinance that will look at trees of a certain size and see if they can be spared when we do this kind of work." 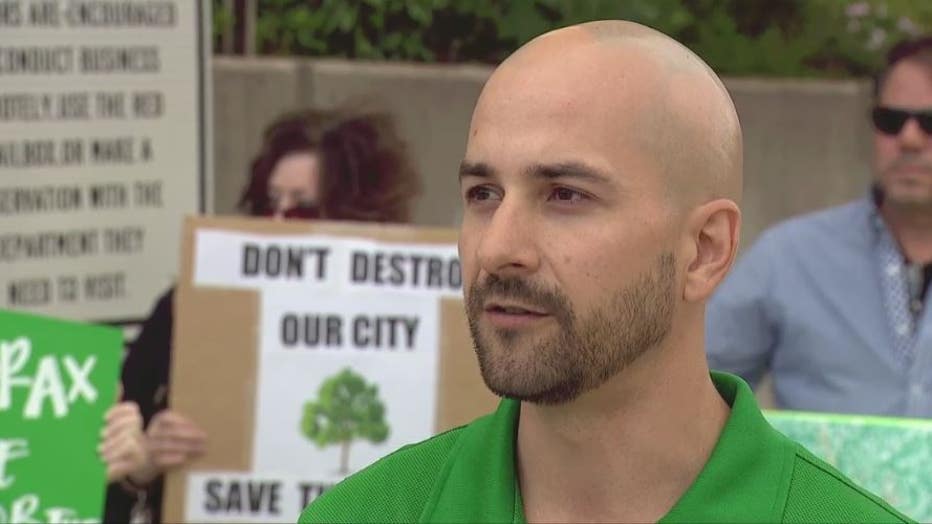 Brent Sabo is leading a group of residents upset over the planned removal of at least 400 trees for street projects.

Sabo, the man behind the effort, says he won't stop his protest until he knows for certain the city will change its ways when it comes to mass tree removals in the future.