CLINTON TWP., Mich. - Two men who led law enforcement on a police chase through Metro Detroit last week before crashing have been charged with homicide following the shooting deaths of two women.

Darrell Semaj Banks, 19, and Dajuan Dion-Diego Davenport, 20, will be arraigned on murder charges Tuesday after they were arrested following a police pursuit that ended in Detroit.

The Clinton Township police headed an investigation into the suspects after both men were taken into custody.

Banks and Davenport have both been charged in connection to the murder of Dazhane Jasmine Holloway, 19, and Dionna Janae Davis, 18, both residents of Clinton Township. 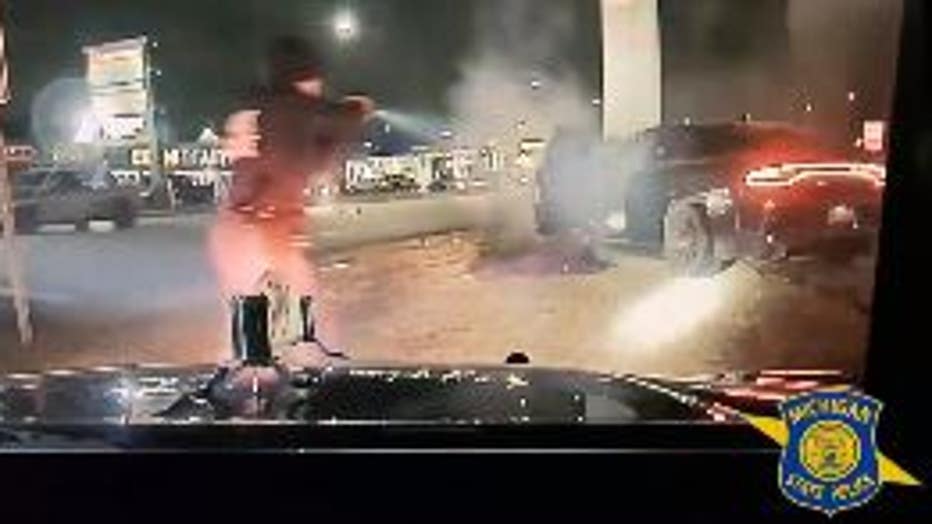 Law enforcement began pursuing the suspects, who were driving a blue Hellcat Dodge Charger, 15 minutes after the shooting occurred. State police provided backup until discontinuing the pursuit as it traveled on I-94.

The Charger refused to comply and took off, leading police on another chase before crashing on 8 Mile and Gratiot.

Two suspects were arrested from a blue Hellcat Charger after leading police on a chase, then crashing at Eight Mile and Gratiot.

A long gun and a pistol were both found inside the suspect vehicle. A witness who watched the crash said the Dodge ran into a pole as it was attempting to make a turn. Dashcam footage of the crash shows the suspect's vehicle colliding with a barrier on the side of the road.

"I was working, I was running this lottery and I heard this big boom," said witness Albara Obahi. "I am thinking somebody ran into the wall. I look over there and I see some smoke and 20 or 30 other cops.

Police said the vehicle that suspects fled in also had one of the victim's 18-month-old child in the backseat at the time of the shooting. They're expected to be okay.

Banks, who lives in Mount Clemens, and Davenport, who lives in Warren, are charged with 2 counts of Homicide and felony firearm. The max penalty for homicide is life in prison.

The suspects were under police guard at a hospital as of Monday and will be arraigned on video in 41B District Court in Clinton Township tomorrow.