Witness who helped shooting victims on I-96 describes chaotic scene

The woman who stopped to help a woman who was bleeding on the side of the road said she sat down and tried to help her as best she could. The victim and her boyfriend were both shot to death.

DETROIT (FOX 2) - An off-duty Detroit Police Officer as the unrelated driver who hit a man who ran from a shooting scene on I-96 Monday night according to sources.

Michigan State Police are still trying to determine what happened that led to the shooting and had the I-96 expressway closed for several hours Monday night and Tuesday morning to investigate. They also closed the section of the highway for a few hours Tuesday as well. Investigators say the off-duty DPD officer who was driving was not at fault.

Priscilla Kaiser was driving on I-96 near Schaefer immediately after it happened. She said she came upon the scene but didn't know what exactly was happening.

She slowed down and saw a man lying in the middle of the road. MSP said that man had been shot to death. On the side of the road was his girlfriend and she was calling on Kaiser to help.

"The lady kept asking for help and for me to help and I got over to her and she was bleeding really bad. She kept telling me that she just had a baby," said Kaiser. "I sat on the ground next to the car with her head on my lap, she was bleeding pretty bad."

MSP Lt. Mike Shaw said there was a shooting with the man and his girlfriend in a Dodge Durango against another man in a Charger. It's not known if this was a shootout or if just one car fired upon the other.

The cars stopped and the driver of the Charger got out and tried to run. He hopped the median but landed in traffic where he was hit and killed by another driver. Police said he is not at fault.

"We are not sure what the relationship between these folks were or exactly what the motive was," said Shaw.

The woman who Kaiser helped later died at the hospital from her gunshot wounds.

The man who jumped the highway was hit by an off-duty Detroit Police officer who was driving into work at the time. 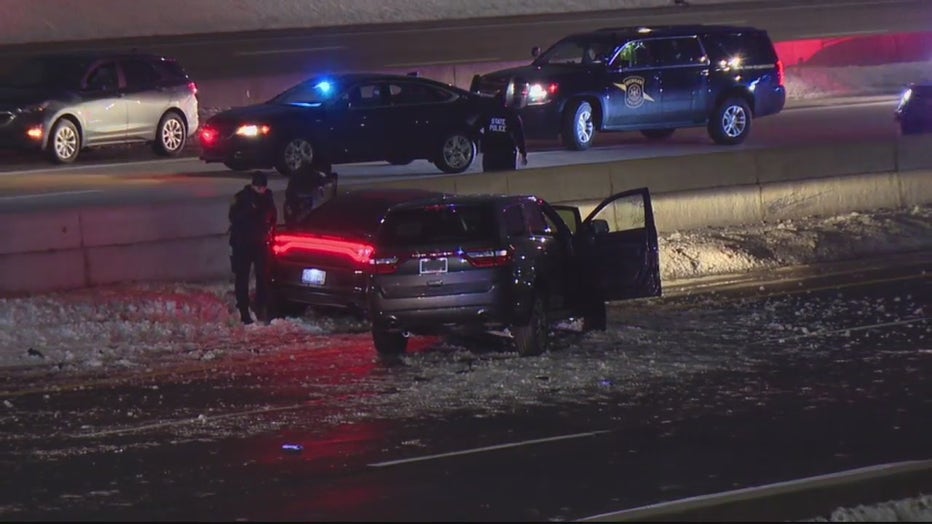 Michigan State Police said two people were shot and killed Monday night and a man who ran from the scene was hit by a passing driver.

State police say this was already the 7th shooting on a Detroit highway since the first of the year but there were dozens more in 2020.  Many of them are road rage-related but others started in the neighborhoods, Shaw said, and then escalated onto the freeways.

"A lot of it is spur of the moment, failure of people to deescalate situations and taking it to a level where it doesn’t need to," said Shaw.

But why is it happening? Shaw said they've heard the activity may be literally driven out of the neighborhoods.

"We did hear there were some groups in the city that knew that the Green Light cameras were very successful and they were all over the city. They knew that they weren't on the freeways so they started taking a lot of their actions - is the best way to put it - onto the freeway because they knew they wouldn't be caught," said shaw.

That's just one theory but Shaw pointed out that troopers have seized three times as many illegal guns from traffic stops in Detroit.

Now more troopers are out on patrol and Shaw said MSP has tapped into highway cameras, as well.

"We did partner with m-dot to use those freeway cameras now to have our own eyes on the freeways," he said.