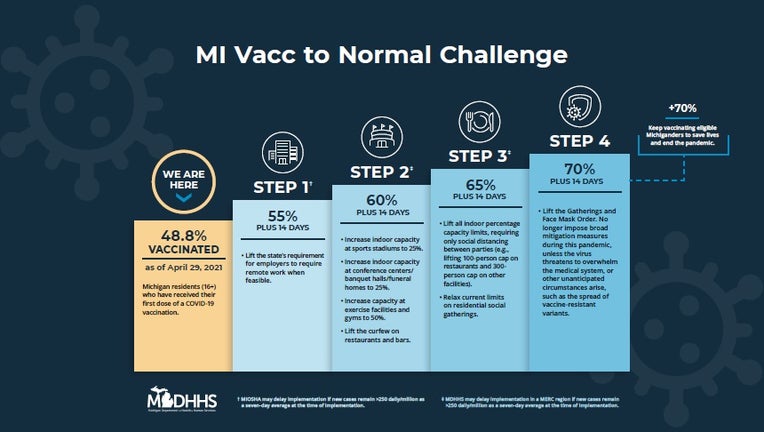 Gov. Gretchen Whitmer unveils the 'MI Vacc to Normal' plan - when Michigan has 70% vaccinated, the mask order will be lifted two weeks later. Currently, Michigan is at 49%.

FERNDALE, Mich. - According to the state's "MI Vacc to Normal" plan, Michigan will need more than half of its adults to get their first vaccine dose before any restrictions change.

Four benchmarks on vaccine rates now separate the state from its health department lifting its mask order and gathering limits, some of MDHHS's longest-standing epidemic orders during COVID-19.

As of April 28, 48.8% of Michigan adults age 16 and up have gotten at least one dose. A little more than 96% of those that have gotten their first shot have gone back for their second.

RELATED: The four milestones Michigan should meet to lift restrictions

Put another way, 3,962,768 residents have gotten at least shot. So how far away are we from hitting the state's four vaccine milestones as of April 28?

The first benchmark Michigan has set is getting 55% of adults at least one shot. Once the state eclipses that threshold plus an additional two weeks, it will allow all in-person work to resume in all sectors of business.

Benchmark number two in Michigan is getting 60% of adults their first-time shot. At that point, indoor capacity at sports stadiums, conference centers, funeral homes, and banquet halls will increase to 25%. Gyms will be allowed to increase capacity to 50% and restaurants will have curfews released.

At benchmark number three, 65% of Michigan adults will need their first-time shot. All indoor capacity limits will be lifted at this point and only social distancing will be required.

The final benchmark will mean 70% of the state's adults have been covered by at least one shot. All MDHHS face mask and gathering limit rules will be lifted. With the exception of any vaccine-resistant variants, MDHHS will no longer employ any broad safety measures at this point.

When will we get there?

After an initial vaccine supply shortage, administration of the Pfizer, Moderna, and Johnson & Johnson doses grew steadily throughout February and March. By mid-April, almost 100,000 shots were being administered each day. That metric combines both first and second-dose administration.

But since then, the seven-day average has fallen: At its peak, almost 400,000 people were getting their first shot.

The number of new people getting their first shot is going down every week. At last week's rate, it would take seven weeks to reach that 70% immunity. And then two more weeks for the vaccines to reach their full effectiveness.