It's going to be a while before the flooding recedes from some of Detroit's most flood-prone freeways after weekend storms dropped enough water to blanket main roads coming in and out of the city. And once the water does recede, there will be plenty of cleanup before they reopen.

MACOMB COUNTY, Mich. (FOX 2) - The Macomb County Sheriff said one man died and a second was rescued from Lake St. Clair during the annual Jobbie Nooner event on Friday when the aluminum boat they were in started to take on water during heavy rains.

The 911 call came in around 11:40 p.m. to a report of a person in the water. The caller, who was on land, said she could hear an unknown person yelling for help near Huron Pointe, which is just off of Lake St. Clair Metropark.

The Sheriff's Marine Division, U.S. Coast Guard, Harrison Township Fire Department, and Tow Boat U.S. all responded to the area and a 22-year-old man from Holt was pulled from the water just after midnight.

The man, who was wearing a life jacket, said he and a friend had taken a 14' aluminum boat to Jobbie Nooner on Friday and were trying to return to the shore when the storm blew in and their boat started to take on water.

The man said he and his friend became separated and he wasn't sure where his friend was at in the water.

Rescue agencies continued to search and, just after 6 a.m. on Saturday, they pulled a man's body from the lake.

Ezekial El Amin, 19, was found in the lake about 2.5 miles away from Lake St. Clair Metropark. Authorities said he was wearing a life jacket when he was rescued.

"This incident is tragic, and our condolences go out to Mr. El Amin's family. I would like to remind everyone the importance of weather when spending time on the water. High winds can produce large waves that can damage, flip, and ultimately sink boats. Please make sure to check the weather, make sure your boat is in proper working order, and have all available safety equipment on board when planning any boating excursion," said Macomb County Sheriff Anthony Wickersham.

Friday's severe weather brought several inches of rain to most of Metro Detroit and strong winds. I-94 in Detroit is still closed due to several areas of standing water on the freeway.

The Macomb County Sheriff's Office Dive Team located the boar and is still working to recover it.

Jobbie Nooner, known as the Midwest's 2nd-largest biggest boat party, takes place on the last Friday in June every year and is not sanctioned by any government entity. 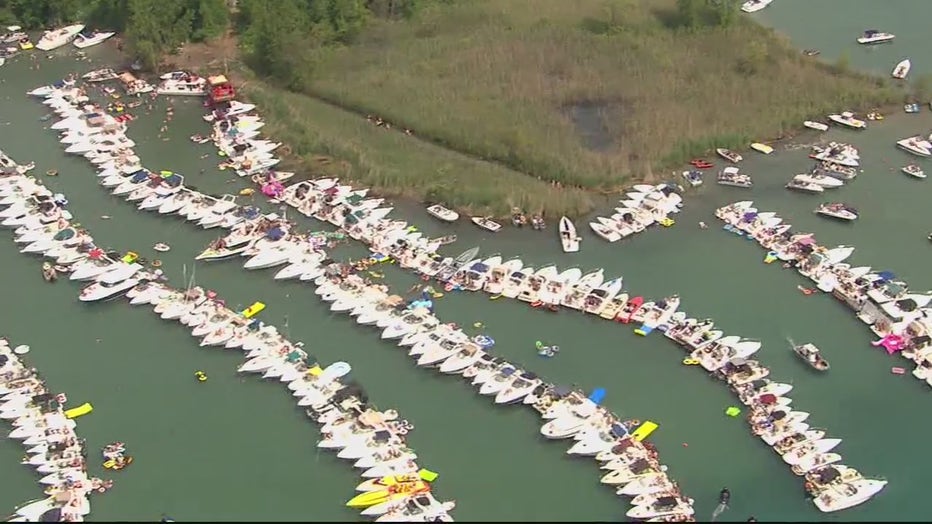