DETROIT - "The facts of this case are straight out of a horror movie," read the introduction to another lawsuit filed against Mark Latunski, the man involved in a gruesome murder reported this January.

James Carlsen, named the plaintiff in a case, alleges Latunski tied him down in his Shiawassee County home, imprisoning him and holding him captive in his basement after Carlsen had traveled from New York to engage in consensual sex with the man

"What Mr. Carlsen did not expect is that during his stay, Defendant Latunski would end up chaining him down in his basement and holding him captive. After he thought Defendant Latunski had fallen asleep, Mr. Carlsen, terrified, cut himself loose using a butcher knife, and ran down the street in the middle of nowhere in order to call the police," continued the lawsuit.

Latunski was originally named the suspect in the disappearing case of Kevin Bacon, a 25-year-old resident of Swartz Creek who was reported missing on Christmas Day. The two had planned to meet Christmas Eve after communicating over an online dating app. 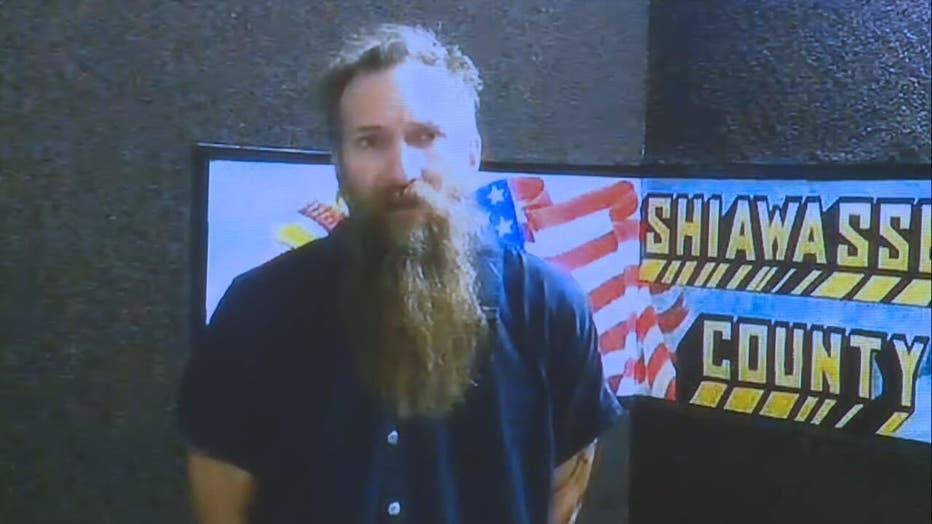 Mark Latunski during a court hearing

After days of searching for Bacon, a tip eventually came to investigators who were led to Latunski's house in Morrice, a village about 25 miles northeast of Lansing. Court filings document the gruesome discovery of Bacon's body, found naked, hanging upside down, and mutilated.

Michigan State Police suspected Latunski's crime in December wasn't the only case and that others may have also been victimized by him.

Latunski's neighbor Michael Parks describes an encounter he had with a man in November on his front porch who was covered in blood at the time and pleading with him to "keep him away," worried "he wants to hurt me, he wants to hurt me." After another vehicle pulled up and Latunski got out, Michigan State Police arrived shortly after and took care of the bleeding man.

No charges were ever filed against Latunski for that incident.

In the newest filing, Carlsen said he met Latunski's husband on Facebook, who eventually introduced the two of them. After Carlson flew from New York to Michigan, he was picked up by the defendant at a bus stop driven to his house. There, he was informed that Latunski's husband had moved out.

After spending some time together, Latunski retrieved locks and chains and locked Carlsen in his basement by tying him down with leather straps.

"Plaintiff, terrified, waited until Defendant Latunski went upstairs and had seemingly fallen asleep, then used a butcher’s knife to cut himself out of the leather straps that defendant used to tie him down," read the lawsuit.

Once Carlsen escaped, he found his cell phone, Latunski's car keys, and ran down the street and called 911. Police picked him up, and after questioning, dropped him off at a gas station. Carlsen made his way to the bus stop.

He would eventually make it back home after Latunski said he would pay for his plane ticket back to New York.

While Carlsen is suing Latunski for a number of crimes, it's unclear what will become of any charges. The mid-Michigan man was found unfit to stand trial on Feb. 27 in the case of Kevin Bacon and was sent to a lockdown facility.

The lawsuit filing is below.