Michigan Governor Gretchen Whitmer said on Monday that the state will extend the order allowing employees to work from home when possible during the COVID-19 pandemic.

YPSILANTI, Mich. (FOX 2) - Michigan Governor Gretchen Whitmer said on Monday that the state will extend the COVID-19 restrictions for workplaces for another six months due to the surge in cases in Michigan over the past 6 weeks.

Following the tour of the Eastern Michigan University vaccine clinic in Ypsilanti, the governor was asked her plans to extend the order that requires people to work from home when possible. She said that the state would be extending the work-from-home orders because of the high case rate in Michigan but that this is a necessary step.

"I know that when we do extend them, which we will,  people are going to think that that means they can't go to the office for another 6 months and that's not the case. By law, we have to give the second extension so that we've got some of the tools," Whitmer said.

The governor said they're working with the business community, labor representatives, and public health experts to determine the back-to-work plans.

"With our high positivity numbers, it's really important to extend for another six months so that we have the ability to work through what these protocols look like and get people back into the workplace when it's safe to do so with the right protocol," Whitmer said. 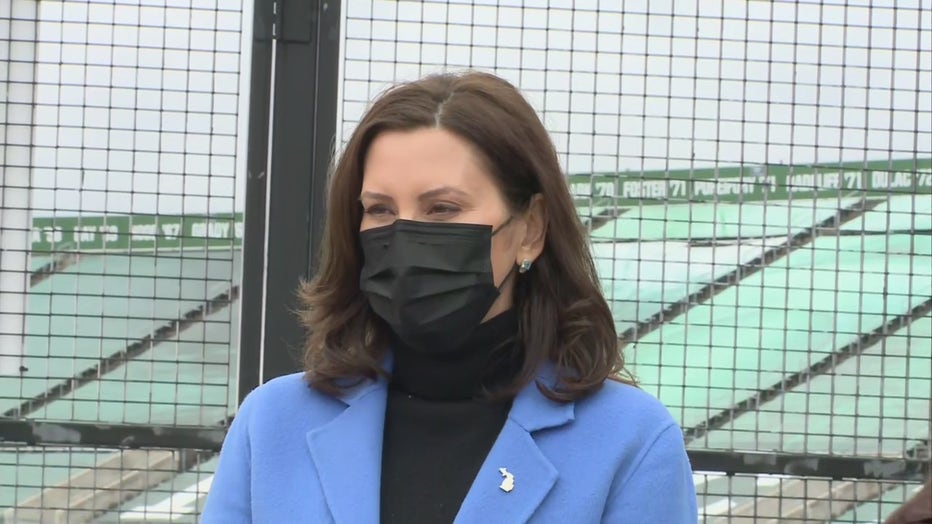 During a briefing on Friday, Whitmer said the state would not issue any new restrictions, despite the increase in cases that has made Michigan the epicenter of cases.

"Policy change alone won't change the tide. We need everyone to take personal responsibility here," she said on Friday.

She reiterated that statement following Monday's tour and said it's up to everyone in Michigan to do their part to stop the spread of the virus.

"The only way out is if we move forward and move together," the governor said.