What is monkeypox and what are the symptoms?

Massachusetts reported a case of monkeypox in a man who recently traveled to Canada on May 18, 2022. FOX Medical Team correspondent Dr. Mike Cirigliano discusses the rare virus.

WASHINGTON (AP) - Thousands more doses of monkeypox vaccine are expected to soon begin shipping to the U.S. after federal health officials said they had completed an inspection of the overseas plant where they were manufactured.

The update from the Food and Drug Administration comes amid growing frustration about limited access to the two-dose vaccine as thousands of people in New York City, California and other parts of the U.S. await a chance to get the shot.

The U.S. government has purchased more than 1.1 million completed doses of the vaccine produced by Bavarian Nordic in Denmark. But the company said earlier this week it needed authorization from an on-site FDA inspection before it could begin sending most of them to the U.S.

An FDA spokeswoman said late Wednesday that regulators "expedited and completed an inspection of the company's plant."

"We do not expect any delay in vaccine availability due to this process," she said in an emailed statement.

Bavarian Nordic has already shipped 300,000 doses that were made at a third-party facility that had previously been inspected by the FDA.

State and local officials in the U.S. say the limited vaccine supplies aren’t keeping pace with the growing number of people seeking appointments, a gap that is fueling anxiety about the virus.

"The demand has been very, very high — overwhelming, at this point," said Dr. Mary Foote, of the New York City health department. "We just want to make clear: If we have the vaccine, we can administer it. The critical issue here right now is supply."

The U.S. government has shipped 132,000 doses of the vaccine to health departments, including more than 21,000 to New York City and 44,000 to California. Federal officials are distributing the vaccines based on each area's case numbers and the portion of the population that is at higher risk from the virus. 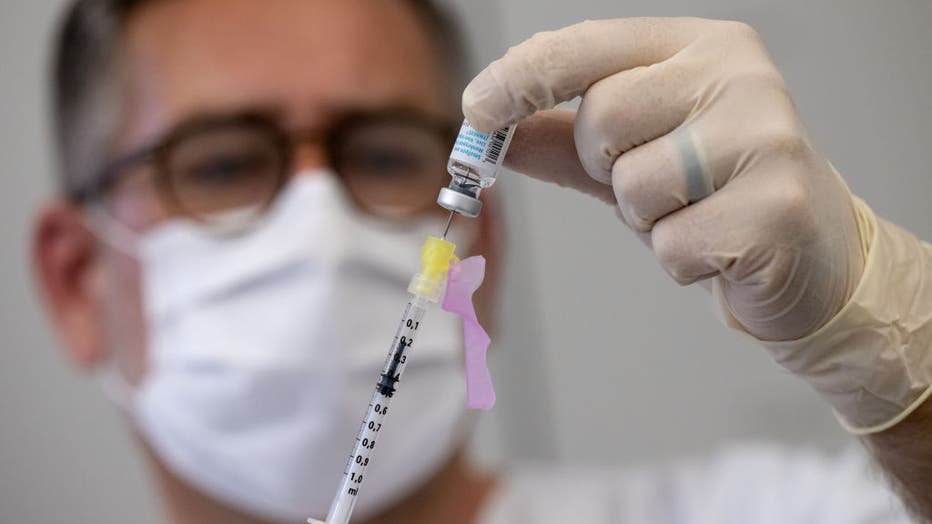 Most of the roughly 1,000 cases reported in the U.S. have been among men who have sex with men, but health officials stress that anyone can get the disease.

The current number of reported cases is likely an undercount because testing is still ramping up. U.S. officials are partnering with several large commercial testing laboratories and say they expect to be able to process 70,000 tests per week by the end of the month.

Most monkeypox patients experience only fever, body aches, chills and fatigue. People with more serious illness may develop a rash and lesions on the face and hands that can spread to other parts of the body.

The FDA requires prior inspections of all vaccine plants to assure their safety, sterility and consistency of production. A company spokesman said Bavarian Nordic sped up its plans to undergo the inspection after monkeypox began spreading in Europe in May. Initially the company planned to submit its paperwork to the FDA in August for an inspection later in the fall.

Bavarian Nordic's Jynneos is one of two vaccines that can be given in the U.S. to prevent monkeypox. The government has many more doses of the other vaccine — an older smallpox vaccine called ACAM2000 that is considered to have a greater risk of side effects and is not recommended for people who have HIV. So it’s the Jynneos vaccine that officials have been using as a primary weapon against the outbreak.

The Centers for Disease Control and Prevention recommends the vaccine for people who have already been exposed to the virus and their presumed contacts. That includes men who have recently had sex with men at parties or in other gatherings in cities where monkeypox cases have been identified.

The CDC estimates that about 1.5 million American men are eligible for the vaccine based on their HIV status and other risk factors.

"There is not enough vaccine to vaccinate the entire population, but definitely categorizing higher-risk groups and prioritizing them will be essential to use our resources wisely," said Dr. Lilian Abbo, an infectious diseases expert at the University of Miami.

Last month, New York-based activists blasted the FDA for not moving more swiftly to inspect the company's plant and begin shipping the vaccines to the U.S. In a letter to the White House, the HIV non-profit PrEP4All noted that European regulators had signed off on the plant last year.

While the FDA relies on inspections by foreign regulators for some facilities, the FDA said it conducts its own inspections for vaccines "to ensure consistency in the inspection process."