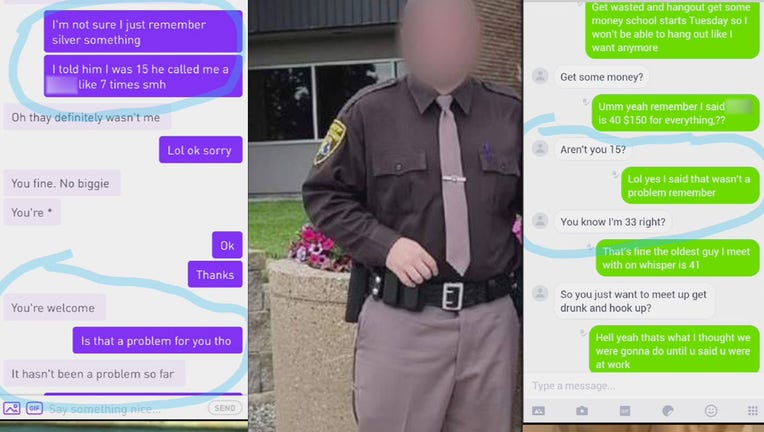 An Oakland County Sheriff's Deputy was fired Tuesday after allegations that he tried to solicit a 15-year-old for sex.

PONTIAC, Mich. (FOX 2) - Oakland County Sheriff Michael Bouchard said on Tuesday that a probationary deputy has been fired after he was accused of solicit what he thought was an underage girl for sex.

The 33-year-old deputy, who is not being named because he does not face charges as of Tuesday, worked the midnight shift in the corrections division. Bouchard announced the deputy was fired on Tuesday, one day after Robert Lee – a self-proclaimed vigilante - posed on The Whisper messaging app, as a 15-year-old girl to lure would-be predators.

An Oakland County Sheriff's deputy was fired after he was allegedly caught trying to solicit sex from who he thought was a 15-year-old girl. It was really a vigilante posing as a teen.

"From our preliminary investigation, it appeared there were a lot of questions about the person's judgment and some of the things they were engaged in," Bouchard said. "This was a 5-month probationary employee that clearly didn't live up to the ethics, standard, and judgment that we expect from our employees and he's no longer employed here."

Bouchard said he expects the case to be presented by his investigators to the Oakland County Prosecutor's Office for review on Tuesday or Wednesday and the prosecutor will ultimately decide on charges.

A probationary Oakland County deputy was fired Tuesday after he was accused of trying to solicit at 15-year-old for sex by a vigilanted who posed as the young girl.

Lee said he downloaded The Whisper and has been doing this for a few months. He says he’s caught and publicly shamed dozens, in some cases even handing his evidence over to police.

Bouchard denied being aware of of these reports and suggested that perhaps Lee did not notify his investigators.

Bouchard is advising people who think they may be aware of something like this to contact police instead of doing it themselves. The first reason is safety but the second is to ensure the investigation is done properly.

"If there's any possible criminal activity, we would encourage people to contact us, whether it involves an employee of ours or the general public, that will give us the opportunity to investigate it," Bouchard said.