Oakland County Sheriff's Office has welcomed two new comfort dogs, Sadie and Wildcat. The animals will provide comfort to the community, like other comfort dogs on the team.

"I've always loved dogs, but now Sadie is my partner. So, Sadie has a specific job Her job to bring love and joy to other people," Deputy Gilbert Garrett said.

Sadie, who works in Pontiac, has already been to a block party and a Department of Transportation meeting.

"Twenty-five years into the job, this is it. I always loved the canine unit, but to have a comfort dog that you get to share with everybody else, and just kind of calm a room when you walk in, especially nowadays we need that, and that's what Sadie's here to do," Garrett said.

Wildcat already went to a call where a person was having a mental health crisis, and defused the situation.

The comfort dog program started three years ago. Now, there are eight Cavalier King Charles Spaniels who are all brothers and sisters. Bouchard said the dogs are the perfect size to help people.

"These we can actually put on the laps of someone in a wheelchair, when we visit a hospital we can put them up on a bed," he said.

One place the dogs have visited is Oxford after last year's deadly school shooting. 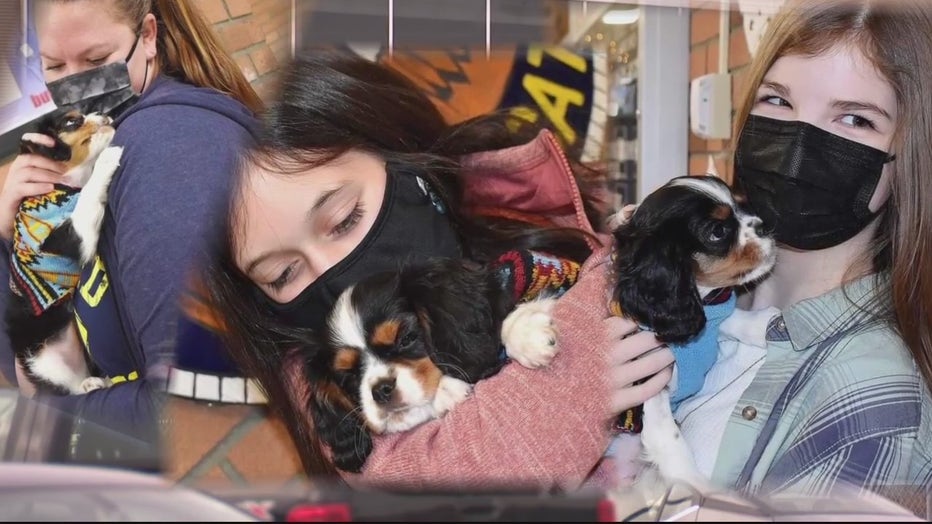 "After visiting at Oxford, these dogs literally passed out -- they were so emotionally drained. They slept from exhaustion, but they took that from the kids. You could see the kids almost unwind as they petted and held the dogs," Bouchard said.

The animals have benefited not only the community, but deputies.

"Having these guys and gals around our people during a tense time has shown a huge benefit," said

Capt. Todd Hill said he may have underestimated just how helpful dogs in the department can be.

"I might have underestimated the ability of the dogs to really affect both the officers in the community and deescalate situations, provide emotional support, and quite frankly just raise the spirits of everyone who's around the dogs," he said.

The sheriff's office is grateful for Clarkston schools for donating dogs and to residents like Susie Rocca, who donated Sadie in memory of her mother who grew up in Pontiac.

"I thought this would be a nice addition for the kids in Pontiac, and I just hope that she makes them as happy as she's making everybody here today," she said.