A Metro Detroit pastor who had a double lung transplant was able to tell every single person who had a role in his life-saving surgery.

SOUTHFIELD, Mich. (FOX 2) - A metro Detroit pastor got a chance to meet the team who saved his life after he received a double lung transplant due to COVID-19.

Richard LaBelle was diagnosed with pulmonary fibrosis a few years ago but it was in the very early stages so the pastor said he never thought about a lung transplant.

"(It was the) furthest thing from my mind," Richard said. "I just kept going on living."

But then came Covid. Both Richard and his wife, Linda, caught the virus earlier in the year. Because of his pre-existing condition, it hit him hard.

"It upset my fibrosis and, I guess between the two of them, they started to chew up my lungs," Richard said.

While fighting the virus, he was taken to a hospital near his home in Milford but was later released to recover at home. Then he had complications breathing and Linda took him to Henry Ford Hospital West Bloomfield where the outlook wasn't good and his only hope to survive was a double lung transplant.

"The doctors told us that he was pretty much a goner at that point and not even alive," Linda said. "You usually don’t get lungs very fast and I'll tell you what I did - I prayed."

Due to Covid restrictions, Richard couldn't get loved ones in to visit. But the care he received from the medical staff, primarily nurse Stephanie Sochi, was amazing.

"This is my why. This is why I chose to be a nurse," Stephanie said.

Linda’s prayers were answered and Richard received his lung transplant at Henry Ford Hospital in Detroit where he received a new set of lungs in 24 hours. Before receiving the news about the lungs Richard says he received another message - this time from above

"It said something to the effect of ‘turn around, it’s not your time yet.' I interpret that as the Lord answering her prayer," Richard said.

As he recovers from the transplant he never forgot the care he received at Henry Ford West Bloomfield. He and Linda went to say thank you to the staff.

Richard believes his blessings are connected to his display of gratitude

"I believe in the power of Thanksgiving. It’s actually Thanksgiving that opened up all the doors. The Bible says give thanks with a grateful heart." 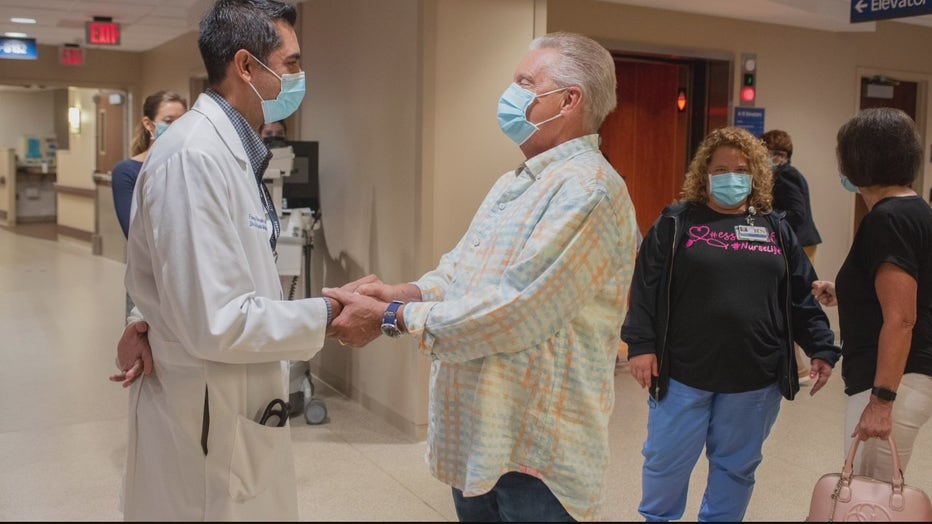