Video of the beating surfaced after the group of women were beaten multiple times by a private security guard outside of 3Fifty Terrace in Detroit, on Madison Street. But there's a lot more to this story.

DETROIT (FOX 2) - A group of women who were out for a night of fun were turned away from a Detroit bar only to be beaten up by a security guard completely unrelated to the bar.

Video of the beating surfaced after the group of women were beaten multiple times by a private security guard outside of 3Fifty Terrace in Detroit, on Madison Street. But there's a lot to this story.

Devon Watson is the head of security for the bar and he is NOT the one throwing punches. At 6'5", 380 lbs - he may be a mountain of a man but he keeps a cool head.

"I'm a lot more calm headed and able to deescalate a lot of situations but there are not a lot of men like me ," Watson said.

On Sunday, he was running security when a woman in a group was turned away from the bar for trying to get in with a fake ID. Watson kept his cool, even though the women were, to put it nicely, displeased.

"After that they kind of got belligerent and got very violent were cussing swearing," Watson said. "Another one of her friends approached me and punched me in the face."

While he was cool and collected, a masked man was not and he stepped in, for some reason.

"He was doing a complete different detail for somebody who felt they needed security in the club - a celebrity or whoever it was. We have no affiliation whatsoever," Watson said.

He said his team would have never handled the situation in this manner.

"We talk our people down and deescalate situations before it ever comes to us having to put hands on anybody," he said.

The women left the bar pretty quickly after the punches and we don't know if they were hurt. As for the mystery man, well, that's still a mystery.

Watson said he's giving a black eye to security like him and his team. 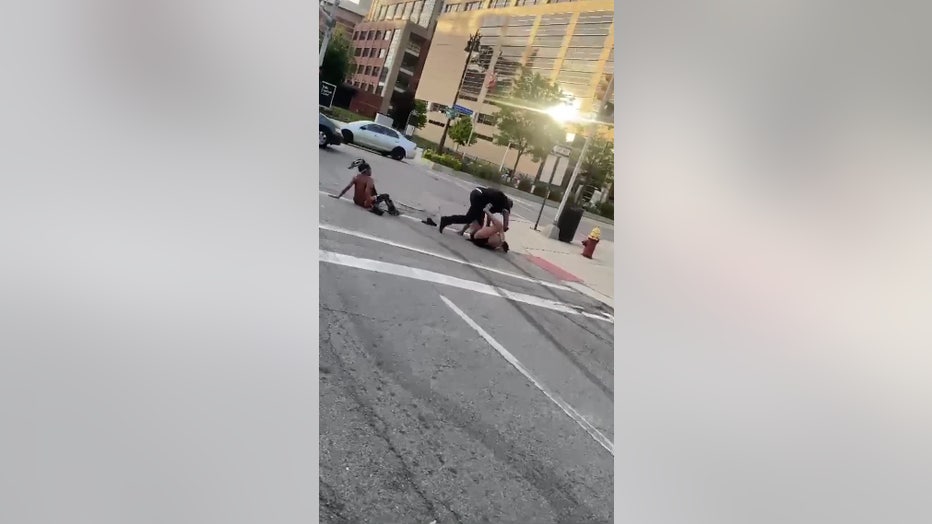 Video shows a private security guard beating on a group of women outside of a Detroit bar on Sunday, June 27, 2020.

"We got to do better. It's sending the wrong message about club security, security all over. We just got to better," Watson said.