A rap video helped lead the police to Tylique Campbell, a Pontiac man suspected in a number of shootings. He is now being sought on a federal gun charge after a shootout near the Elam Brothers restaurant in September.

PONTIAC, Mich. (FOX 2) - A rap video helped lead the police to Tylique Campbell, a Pontiac man suspected in a number of shootings. He is now being sought on a federal gun charge after a shootout near the Elam Brothers restaurant in September.

"I was back there ... cooking and all I heard was (seven gunshots) " said Roy Gill.

Gill works at the restaurant on Sanford Street and E. Willis in Pontiac. Several of the gunshots hit his truck

"Next thing I know, I see my back window shattered and the passenger side was broken out," he said. "I had to get it fixed, it was $800."

Another employee’s vehicle was also peppered with bullets.

"I could still see them, they were shooting each other," Gill said. "One dropped his bag and another just kept on shooting at each other."

The Oakland County Sheriff's Office says Campbell and several of his associates are believed to be involved in a number of shootings in Pontiac dating back to January.

The rap video featuring Campbell was uploaded to YouTube around the same time as the September shooting.

In it, investigators say, are guns and extended magazines they found at the scene of the shooting. The guns were even inside a backpack strikingly similar to one seen in the video.

The men were taken into custody and later released. The sheriff’s office is still working with the Oakland County Prosecutor to get charges on the men involved.

The ATF managed to get a federal warrant for Campbell Thursday, for being a felon in possession of a handgun.

Campbell is currently on probation for calling in bomb threats. 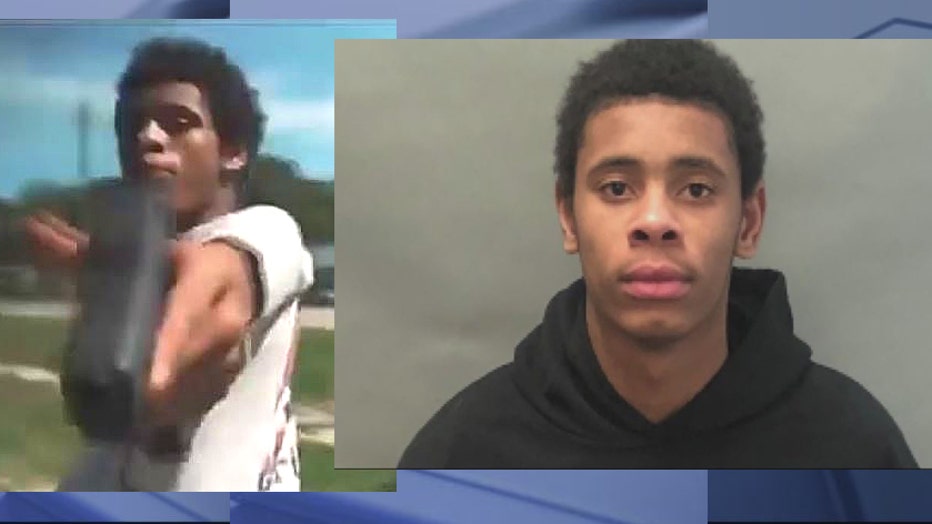 In addition to the vehicles, one of the men was shot in the foot. A bullet also struck a nearby home, but no one inside was hurt.

"It was scary but like a movie," Gill said. "But like I said, it’s crazy man, But we've got to pray for the city, pray for the young people, and pray for the people that we get along. Because we can’t do this. we can’t keep hurting each other."

The sheriff’s office and the feds are actively searching for Campbell. they are asking anyone with information on where he is, to call Crime Stoppers at 1-800- SPEAK-UP. There is a $1,000 reward for information leading to his arrest.