When your car reaches the end of its life, it's not done yet. That old beater will get the form of a new life through meticulous work of ripping it apart.

LIVONIA, Mich. (FOX 2) - Recycling cars is a big business and those who do it best make sure to get top dollar, by leaving no part behind. How is it all done?

The current market for recycling cars is the highest it's been in 15 years, according to Scott from Great lakes Recycling in Livonia.

The goal, he said, is to recycle every bit from each car.

"We recycle all cars: Ferrous, non-ferrous metals, wire, copper, everything," said Scott.  "This is a landfill-free zone, nothing gets thrown away - in any way, shape, or form - it all get's recycled."

The first thing that goes in every single car is the battery. This is for environmental but also safety reasons.

With the battery out of the way, they have to drain the fluids like oil and gas. Then it's time for destruction in the form of an enormous claw. Then, like a surgeon, the crew makes sure to pick the car apart.

"He's clearing the motor bay. He's gonna remove the radiator. He takes that aluminum radiator and putting it to the side, next after he gets all that aluminum he's gonna go after the dash and the motor for the harness wire, the copper," he said.

But that's just the beginning. There's a lot to remove.

"That's your motor transmission combination and he's gonna set that off to the side for the guys to come over, our upgraders come - they take anything they can get, whether it's an alternator or a starter, harness wire - anything we can recycle," said Scott.

With the stuff worth saving pulled - now it's time to crush it with the baler. And it's just like what you see in the movies.

From start to finish - this process takes about 20 minutes - meaning Great lakes Recycling can recycle a lot of cars in just one day.

That's 250 cars taken apart, saved, and reused as much as possible to create a cleaner and safer environment for our children and generations to come.

To learn more about how you can drop off your car, their website is glradvanced.com 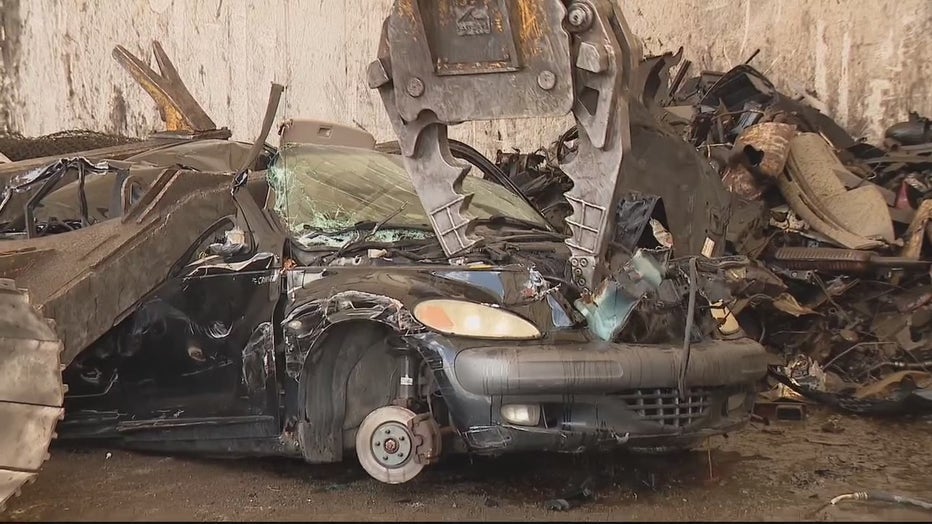 When your car reaches the end of its life, it's not done yet. That old beater will get the form of a new life through meticulous work of ripping it apart.